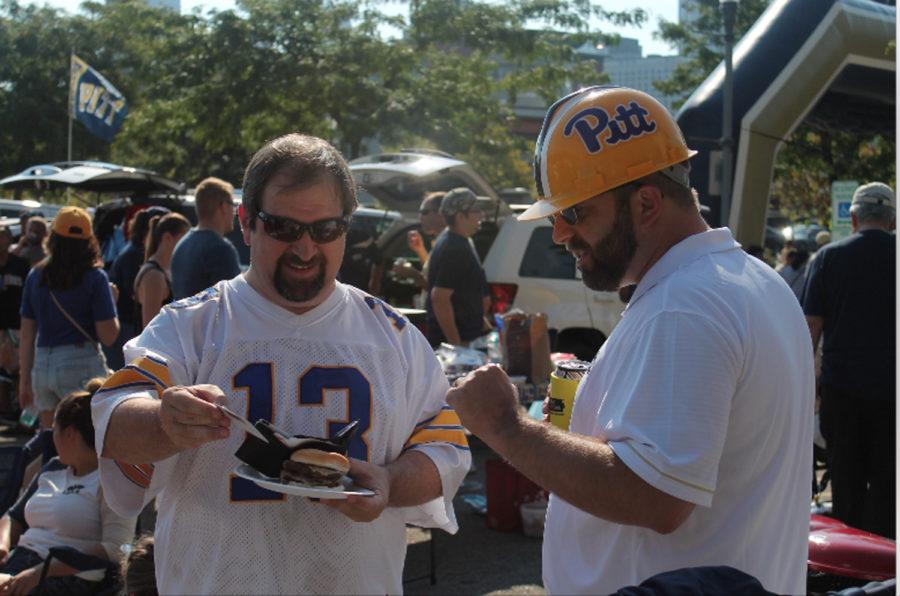 By Jesse Madden | For The Pitt News

But he found his favorite part about the pre-game tradition was the view he and his fellow tailgaters had from their position on the Great Lawn, the grassy area near Heinz Field between Roberto Clemente Memorial Park and the Law Enforcement Officers Memorial.

Su — an industrial engineering graduate student — was one of 500 Pitt faculty, students and Panthers fans who gathered Saturday to utilize the services of Tailgate Guys at the Pitt-Oklahoma State game.

Tailgate Guys, founded in 2009 by Auburn University alumni Michael Otwell and Parker Duffey, is a company that partners with universities to provide tailgating materials and services.

And as of the 2017 Panther football season, it counts Pitt among its group of partners.

Starting in July, four different packages became available for Pitt fans to purchase. Options range from the varsity package — a 10’ x 10’ tent, five tailgate chairs and a 6’ table — to the club package, which comes equipped with a 20’ x 20’ tent, 20 chairs, three tables and a television. They all include the option to have food catered from local restaurants. At Pitt, options include South Side BBQ Company, Moe’s Southwest Grill and Burgatory.

“With Ribfest going on at the North Shore, we didn’t think it would be a good time to start offering our services,” he said. “We’ll be at every game for the rest of the season now.”

Chris Bain, Pitt’s assistant athletic director of marketing, worked with the rest of the athletics department to bring the company to Pitt. Feedback from fans — such as those on the Panthers Fan Experience Committee — had a lot to say about improving tailgating at Pitt games.

“This is something that we actually looked into last season by way of a fan survey following the 2015 football season,” he said.

Bain said the survey responses included numerous comments asking for a better tailgating experience. He started researching what other schools were doing and came across Tailgate Guys. They reached no agreement last year, Bain said, because the company was largely focused on the South.

“They didn’t really have a lot of operations up here. But then, this past summer they got back in touch with us and explained how they were extending their footprint to the Northeast,” he said. “We were able to work together and make it happen.”

Acierno said it wasn’t until Pitt got a new athletic director, Heather Lyke, that the partnership between Tailgate Guys and the University took off.

“Heather really wanted to enhance the fan experience as much as she could when she got into the position, and I think that’s what made it possible for us to finally get the ball rolling,” he said.

Both the University and Tailgate Guys declined to comment on financial details of their agreement. According to Bain, the percent of the sales money that the University receives goes straight to the athletic department.

“It’s a win-win for everybody,” Bain said. “But most important is that experience for our fans, and it’s just another opportunity for them to enjoy a day or night out on our turf.”

Jamie Zeldin, a vacationer from Canada, first encountered Tailgate Guys when his brother’s bachelor party — held in the parking lot of a Texas game in 2016 — used its services. He decided to purchase a tailgating package when setting up another bachelor party — this one for a friend — at the game on Saturday.

Tailgate Guys services can be reserved for more than a single game or event. Mark Duca, a Pitt football season ticket owner, said he purchased Tailgate Guys’ service for the entire 2017 season.

“I love the convenience of it. They do everything for you,” he said. “The only thing you need to bring is drinks as the food can be catered for you.”

Acierno said the goal of Tailgate Guys is to make the experience of tailgating as easy as possible for football fans.

“In my opinion, the usual tailgate experience has become somewhat burdensome to a lot of people. You have to figure out what food you’re bringing, who’s getting the table and chairs, and then the parking lots are usually packed and there’s the possibility of bad weather,” he said. “We help alleviate some of those troubles.”

Jack Tighe, a Panther fan and tailgater at the game, adored how much easier it made the experience for him and his friends.

“Group of us went in to get these tents together,” he said. “It’s such a good, centralized way to meet before the game.”

Acierno that since the partnership was created and Tailgate Guys’ services became available for purchase over the summer, there’s been a steady amount of interest in what the company has to offer for Pitt games.

“A lot of times we find fans who have been tailgating for a long time and are now in a position where they’re just tired and want a hassle-free tailgate,” he said. “We’re something they didn’t know they needed until they heard about us.”