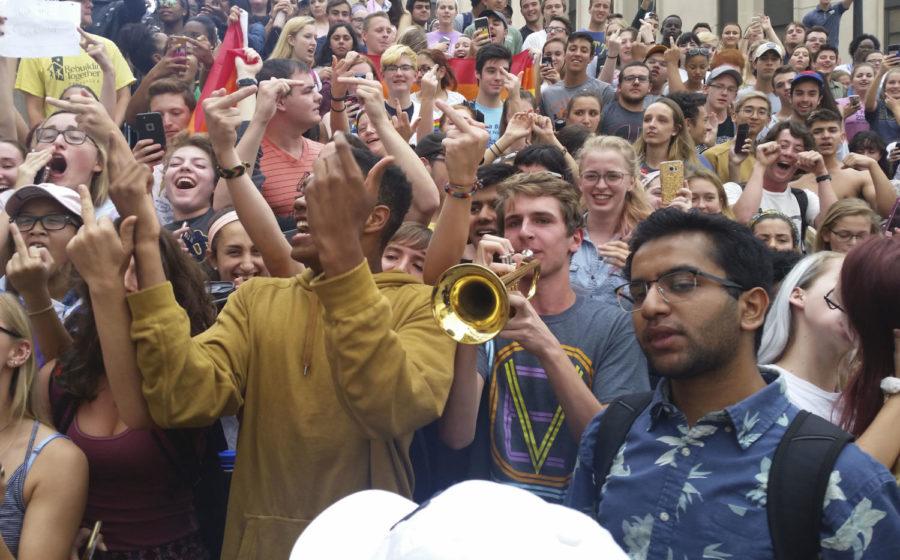 Counter-protestesters sing the Star-Spangled Banner while one student plays along on the trumpet. (Photo by John Hamilton | Managing Editor)

When protesters descended on campus yesterday afternoon to push a controversial message, they weren’t the only ones ready to exercise their freedom of speech.

Members of Christian Interviews, an organization from the Philadelphia area, appeared on the Fifth Avenue-side patio of Towers around 1 p.m. bearing signs with messages hostile toward Muslims and members of the LGBTQ+ community. While the protesters soon got attention from Pitt students, it might not have been the kind of attention they wanted.

Students began assembling against the protesters. A growing group of students, combined with a presence from the Pitt Police, moved the protesters — who didn’t have a permit to demonstrate on private property, according to Pitt spokesperson Joe Miksch — off campus and onto the sidewalk.

The student counterprotest that helped remove the bigoted demonstrators from campus were able to accomplish a great deal of good without violence, student arrests or conflict with police. In doing so, they proved that the voices of college students can still be powerful — even in a time when we’re often disparaged for it.

The organization responsible for yesterday’s protest and counterprotest has practiced much the same tactics previously at other schools in Pennsylvania. They picketed the Community College of Philadelphia in April, hurling epitaphs like “perverts” and “sissies” at students. In December, the group’s visit to Bucks County Community College resulted in a brief episode of violence on campus.

It’s surprising, then, that yesterday’s agitation led to nothing more than the arrest of one of the homophobic group’s members and its expulsion from campus. The absence of violence was even more remarkable given the impromptu nature of the counterprotest.

In an era when violent protests and protest culture have taken a more prominent position in collegiate life — both at Pitt and around the country — it’s refreshing to see an example of a demonstration that was both peaceful and successful in removing a hateful group from campus. Those involved in defusing the situation yesterday should be commended.

Yesterday’s events outside Towers also highlighted Christian Interviews’ distance from mainstream opinion. It isn’t difficult to agree that the protesters’ outright hatred for LGBTQ+ people, Muslims and women is deplorable — and it’s a relief that so many parts of the campus community could organize against it.

But it’s going to be difficult to replicate such a show of unity in future controversies on campus. The entire Pitt campus should take yesterday’s success as a sign of what works in future debates — combating hate speech with louder speech, not violence.