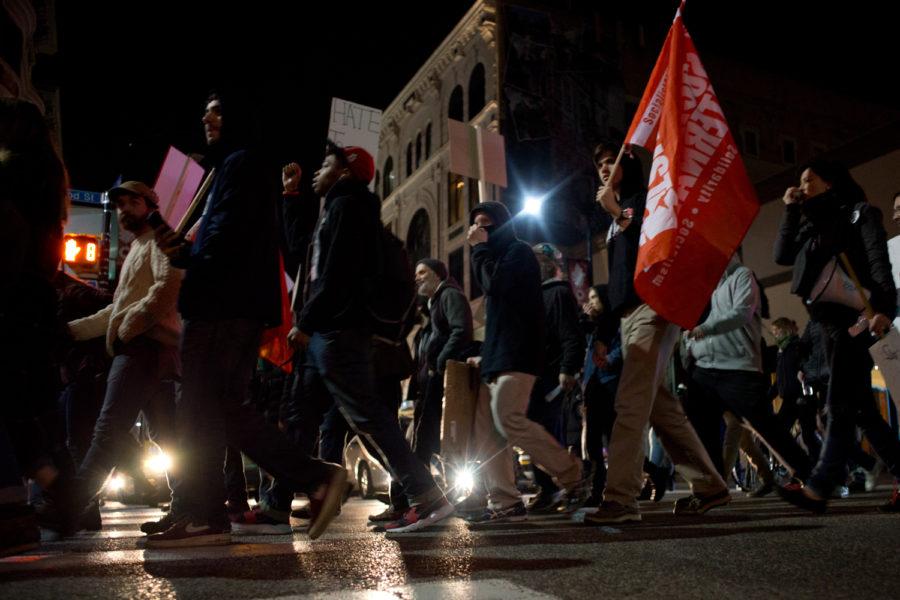 More than 200 students gathered at the base of Litchfield Towers Monday to protest a group that spewed homophobia, racism and sexism on our campus. Thankfully, no one was hurt — students drove the bigoted group across the street and off campus.

But it seems that if it were up to State Rep. Aaron Bernstine — who also serves as an adjunct professor at Pitt’s graduate business school — safety might not have been assured. Bernstine tweeted on Saturday a reply to The Hill’s report that protesters shut down St. Louis streets after an ex-cop was acquitted.

“If anyone EVER tries to stop my car on a highway with negative intentions… I will not stop under any conditions,” he said — a statement that comes only a few weeks after 32-year-old Heather Heyer was killed in Charlottesville, Virginia, after a driver struck a crowd of protesters.

This isn’t Bernstine’s first time threatening violence on his Twitter account, and it’s not merely a controversial opinion — Bernstine’s speech poses a serious threat to student safety on campus. And in our current political climate, which fosters frequent protests, his presence on campus could pose a danger to all.

Bernstine tweeted a similar opinion in 2013 as demonstrations raged over the death of Trayvon Martin. He said he’d “def not stop [his] car!” for protesters shutting down highway traffic — demonstrative of his tendency to disregard life when it gets in his way or opposes his political beliefs. And so far, the University hasn’t condemned Bernstine’s tweets.

“The University supports free speech and expression and an educational environment in which these rights are respected and people of all views can participate in civil discourse,” Pitt spokesperson Joe Miksch told The Incline and later confirmed with The Pitt News by email.

But this response is dangerous and misguided. Bernstine has the right to post his controversial opinions to his Twitter page, but Pitt should not support employees’ speech that directly threatens student safety.

We thoroughly believe in the benefits of free speech — in fact, we defended an FSU professor who made controversial remarks on Twitter about Hurricane Harvey. But Bernstine’s tweets weren’t just controversial remarks. He made well-formulated threats of violence toward protesters, not just inappropriate comments about natural disasters.

If Bernstine were driving on Pitt’s campus and a demonstration broke out — which has happened numerous times over the past year — his promise to use his vehicle as a weapon would make him a serious threat.

A promise so severe and explicitly violent has absolutely no place on our campus, and our University should not tolerate it.

After receiving criticism for his tweet, Bernstine responded and told people to call his office to voice their opinions. So please do.

And if you live in Pennsylvania District 10 when Bernstine is up for reelection, vote against him. There should be no space for these kinds of violent threats on our campus or in our government.