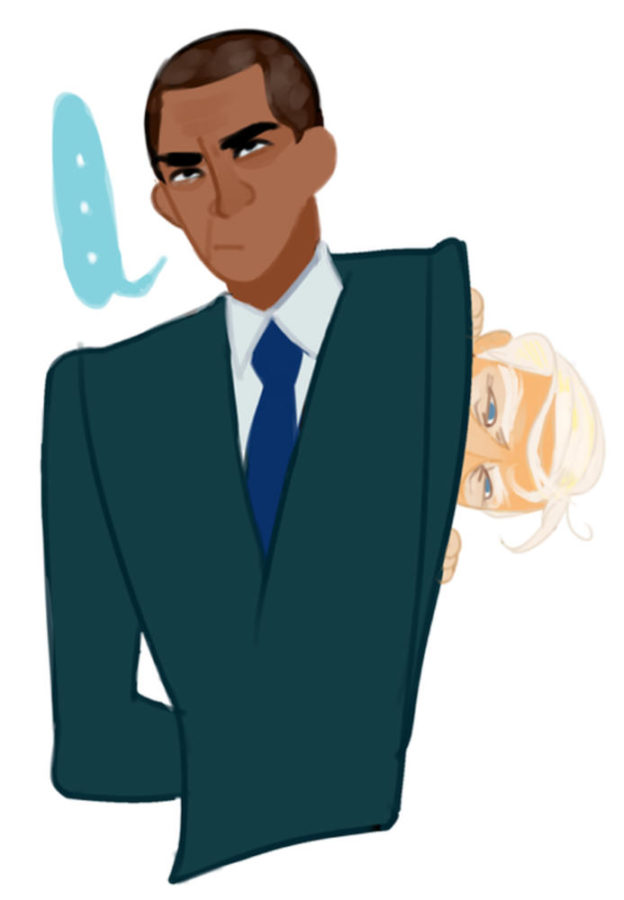 By Vaibhavi Patria | For The Pitt News

In his mind, President Donald Trump can never go wrong — his actions are justified, his words are nothing but the truth and his band of followers is loyal and ever-growing. And when he’s not praising himself, he’s shifting the blame to others.

“I inherited a mess, it’s a mess at home and abroad. A mess,” he said during a press conference in February.

Particularly when Trump faces scrutiny, he uses his rhetoric to shift the blame to anyone else — a tactic that was evident even before he was elected. A few weeks before the election in November, Trump said he believed Hillary Clinton was “the most corrupt person ever to seek the office of the presidency.”

And often at his speeches, this was the extent of the content. He regularly failed to present feasible solutions for controversial issues such as immigration, gun control or health care. Instead, he merely stoked anger toward whomever he could easily blame. Trade issues existed because former President Barack Obama was “one of the most incompetent negotiators on everything.” Our foreign policy was weak because Obama was “the founder of ISIS.”

I’ve taken to calling this the blame game.

One of the most prominent examples of this is Trump’s persistent campaign against the media, which he believes reports fake news regarding the Russian investigation.

“It is my opinion that many of the leaks coming out of the White House are fabricated lies made up by the #FakeNews media,” he tweeted in May. But now, it’s increasingly clear this was far from fake news — the Senate investigation into his involvement with Russia verified the leaks and proved extensive communication and alliance between Trump and Russia. What this shows is that his tweets are an effort to evade the consequences of his possible collusion.

But the blame does not merely stop there. Time and time again Trump criticized former President Obama for leaving the state of the country a mess, despite the improving economy and falling unemployment rates that Trump inherited. By condemning his predecessor, Trump merely appeals to an audience who disapproves of Obama rather than an audience that approves of his own actions.

Trump definitely plays the blame game when it comes to immigration. A few weeks ago Trump announced his decision to rescind the Obama-era executive action Deferred Action for Childhood Arrivals, which shields young undocumented immigrants, or Dreamers, from deportation provided they pursue education or join the military. Rescinding DACA may end up directly affecting over 800,000 people.

But of course, the plan has a caveat — Trump tweeted that “Congress now has six months to legalize DACA (something the Obama Administration was unable to do).”

There’s a calculated reason he made this tweet. Now, if DACA fails to be legalized in Congress, the blame doesn’t fall on him. Trump has taken every chance he can to blame the broken immigration system and his inhumane decision to repeal DACA on a Congress that hasn’t been able to fix much yet.

Through his numerous attempts at making everyone but himself look responsible for various issues, we as a nation appear disorganized and weak — we lack the communication and collaboration needed to foster successful policy making, along with the diplomacy needed to harbor crucial relationships with our allies.

In fact, Trump’s rhetoric has come to such an extreme that he is now a laughingstock for many nations. At his recent speech to the United Nations, Trump made a series of outrageous remarks that were each met with stony silence and an abundance of criticism from the media. The Washington Post described Trump as making “himself sound simultaneously weak and bellicose with such bluster.”

This does not bode well for our nation. Our image has already been greatly diminished in the few months that Trump has been in power. If our allies stop taking us seriously, then what will happen with countries such as China and North Korea? What will happen to trade deals and communication with various nations? What will happen to our reliability and values?

Failure to change his rhetoric will lead Donald Trump down a dark path — and he’s sure to take the country with him. It’s high time our president realizes the importance of responsibility and diplomacy, rather than childishly lashing out at every critic coming his way. He must consider the nature of his language and its impact not only on his presidency, but also on the nation in its entirety. Now more than ever we need responsible, decisive leadership — and that must start with our president.