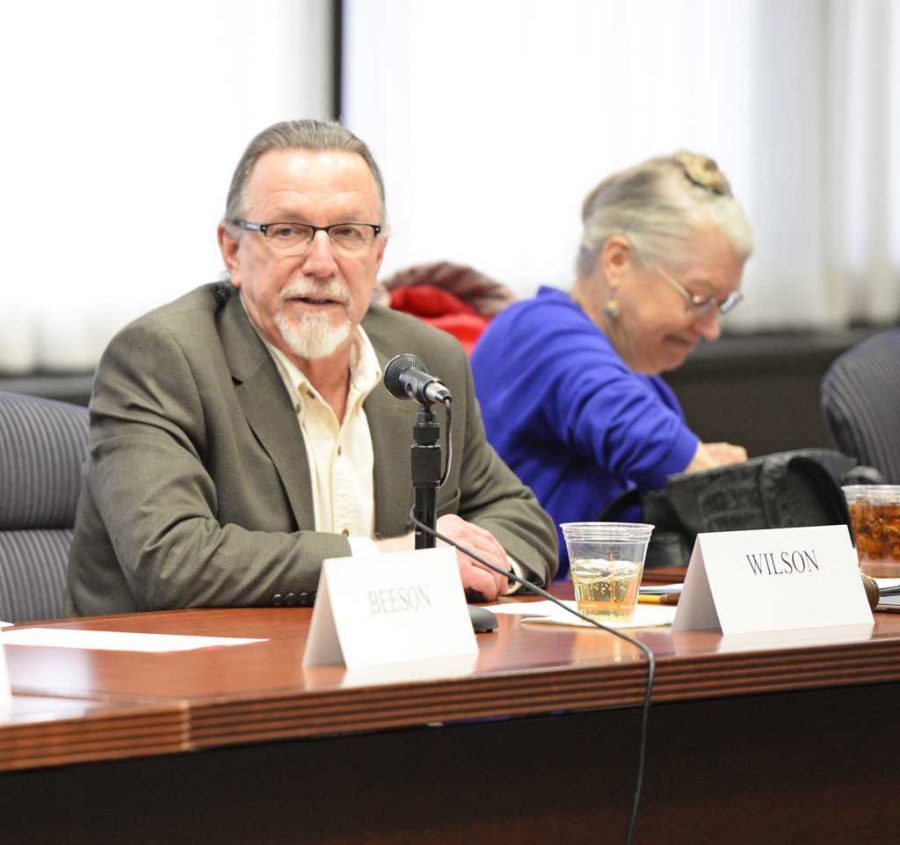 The University Senate Council kicked off its first meeting of the academic year in room 2700 of Posvar Hall by condemning the hatred that occurred in front of Litchfield Towers this past week.

“[A university is] fundamentally a community where everyone has the right to belong to that community and fully participate in it,” Chancellor Patrick Gallagher said on Wednesday.

The protests took place on Monday when a small group of protesters — part of the Philadelphia-based “Christian Interviews” group — arrived on Pitt’s campus, brandishing signs with phrases such as “homos go to hell.” In response, more than 200 Pitt students showed up to counterprotest, sporting rainbow flags and handmade signs.

After the Chancellor’s opening remarks, the University Senate Council meeting proceeded with additional reports from Senate President Frank Wilson, Student Government Board President Max Kneis and other members of the council.

Similar to the Chancellor’s speech, issues of diversity, inclusion and free speech arose in Wilson’s report. Among the initiatives mentioned, Wilson said the Equity, Inclusion and Anti-discrimination Advocacy Committee created a set of principles called the “Pitt Principles,” which include free expression, pursuit of knowledge, diversity and inclusion, public service and shared governance.

There will be a series of open forums for the public to hear, discuss and debate these principles. The first forum is scheduled after the Faculty Assembly meeting Oct. 10 in room 2500 of Posvar Hall at 4:30 p.m.

“The University of Pittsburgh is committed to the vigorous protection of free expression and onto the highest standards of academic freedom,” Wilson said.

Graduate Student Representative Amber Griffith touched on additional issues related to diversity and inclusion. Pitt scored 4.5 out of 5 on the Campus Pride Index created by the national nonprofit Campus Pride. They rank universities on LGBTQ+ friendliness based on campus safety, health and counseling, academic life and recruitment and retention efforts.

“Generally, the Arts and Sciences graduate students responded positively to questions about diversity and inclusion,” Griffith said. “Graduate students feel that their departments are welcoming and safe spaces where people can openly exchange ideas.”

Other council members reported on the progress of their individual organizations. Christopher Staten, a second-year MBA student and president of the Graduate and Professional Student Government, said a survey revealed many graduate students do not know what GPSG is and what it can offer them.

“So we hit the streets, we kind of got down in the weeds and we had a campus wide tour,” Staten said.

The council also reviewed and unanimously passed a single motion at the end of the meeting to create a new standing committee on faculty affairs. The committee will drive the policies and procedures pertaining to faculty affairs, including faculty development — such as leaves, travel allowances, internal grants — and faculty performance, including contracts, annual evaluations and compensation.

After the meeting, Gallagher answered questions regarding Deferred Action for Childhood Arrivals.

“We’re very concerned over the decision to undermine the DACA program,” Gallagher said.

He said measures are being taken to call and email students about the situation through the Student Affairs office. He also said a conversation with other universities is in the works about ways to help and show their support.

Provost Patricia Beeson also responded to questions after the meeting and relayed her reasoning for opposing a graduate union. She said graduate students’ engagement in research and in the classroom is an integral part of their training as students.

“Treating the training as if it were not training could be detrimental to the relationships and not in the best interest of the students and the University,” Beeson said. “It’s turning something I think of as a mentoring relationship and a relationship focused on education and training into one that is an employee-employer relationship, which is very different.”