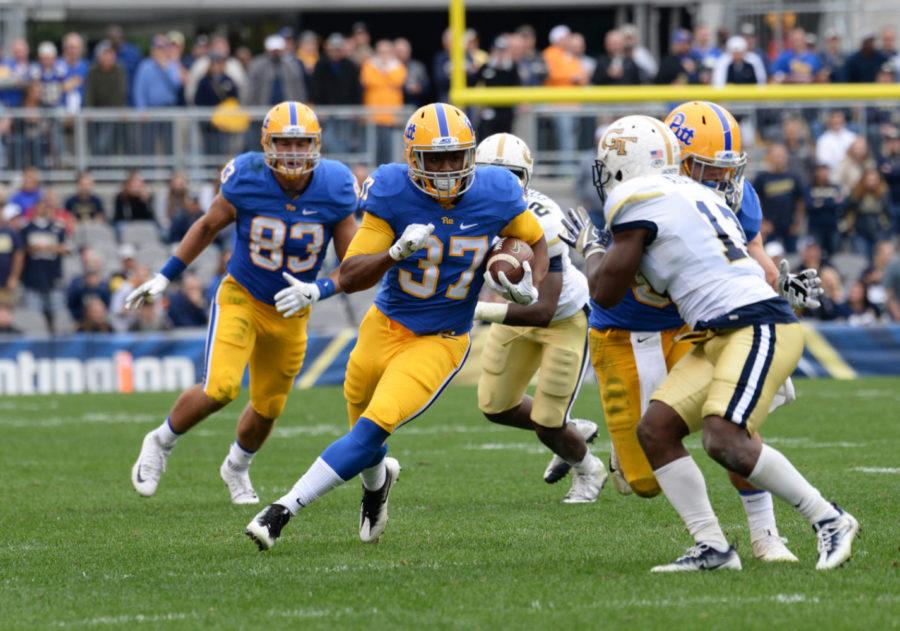 Qadree Ollison rushed 20 yards and made a touchdown in the game against Georgia Tech last season. (TPN file photo)

By Abbot Zuk | For The Pitt News

The last time the Pitt Panthers and the Georgia Tech Yellow Jackets squared off, it took two exemplary scoring plays by Pitt — with less than five minutes of play remaining — to seal a victory.

Quarterback Nathan Peterman connected with tight end Scott Orndoff, who bolted down the field for a 74-yard passing touchdown to tie the game at 34 points.

Minutes later, kicker Chris Blewitt sent a kick ricocheting off the right side of the post and through the uprights, just in time for the Panthers’ 37-34 victory.

This matchup could go a similar way, especially considering the Panthers enter Saturday’s game against the Yellow Jackets the same way they entered last year — coming off a loss to the Oklahoma State Cowboys.

“I’d like to be here under different circumstances, but another tough one as we talked Saturday,” Narduzzi said in his weekly press conference. “Obviously still disappointed in really how it came out, but actually when you watch the tape, you don’t feel as bad as you did Saturday.”

Regardless of the team’s feelings about the previous game, the Panthers’ approach to another electric offensive onslaught is important to the upcoming game. Georgia Tech quarterback TaQuon Marshall and running back KirVonte Benson will be major play-making threats.

Marshall and Benson pose a precarious challenge to the Panthers because of their durability. Both of the Georgia Tech rushers who have amassed double-digit carries in each of the Yellow Jackets’ last two games.

Pitt has surrendered 357 yards on the ground in three games this season — a 119.7 yards per game average — which isn’t bad. But if the Panthers are going to find success in week, their front seven will need to be prepared and committed to stopping Georgia Tech’s versatile running game.

The Yellow Jackets specialize in what is known as the spread option or triple option. After snapping the ball, the quarterback will either roll to his left or right and run — if he sees an opening — rather than drop back to pass. He can also pitch the ball to a running back or wide receiver in motion. This type of offense leads to astounding rushing states and high scoring games.

In Georgia Tech’s two games this season — with their game last week against the University of Central Florida was canceled due to Hurricane Irma — the Yellow Jackets ran the ball 135 times. In the process, they picked up 745 yards and eight touchdowns. Marshall and Benson made up almost 70 percent of the 135 carries.

Georgia Tech’s ability to run the ball has developed the team’s passing attack into an anomaly. However, when Marshall opts to throw the ball, the results can be lethal.

Marshall has only thrown the ball 16 times over the course of the season. Of those 16 attempts, 10 were completed — with three resulting in touchdowns in the team’s game against Jacksonville State.

With these threats in mind, Pitt should be cementing its plays and keying in on the optimal players for a win.

But Narduzzi is still keeping the decision of starting quarterback to himself. In the Panthers’ last two games, both redshirt sophomore Ben DiNucci and redshirt senior Max Browne have filled the role of quarterback.

“We’re going to continue to evaluate [the quarterback situation],” Narduzzi said. “They both do some really good things on tape.”

These two have been staples of Pitt’s offense for the last two seasons. Look for each of them to remind the FBS that they belong among the best players in the country.

If DiNucci does receive his first start at quarterback, it will give the Panthers their best opportunity to keep up with the Yellow Jackets’ offense.

However, the game will ultimately come down to whether or not Pitt’s defense can force turnovers and hold the Yellow Jackets to field goals in vital situations.