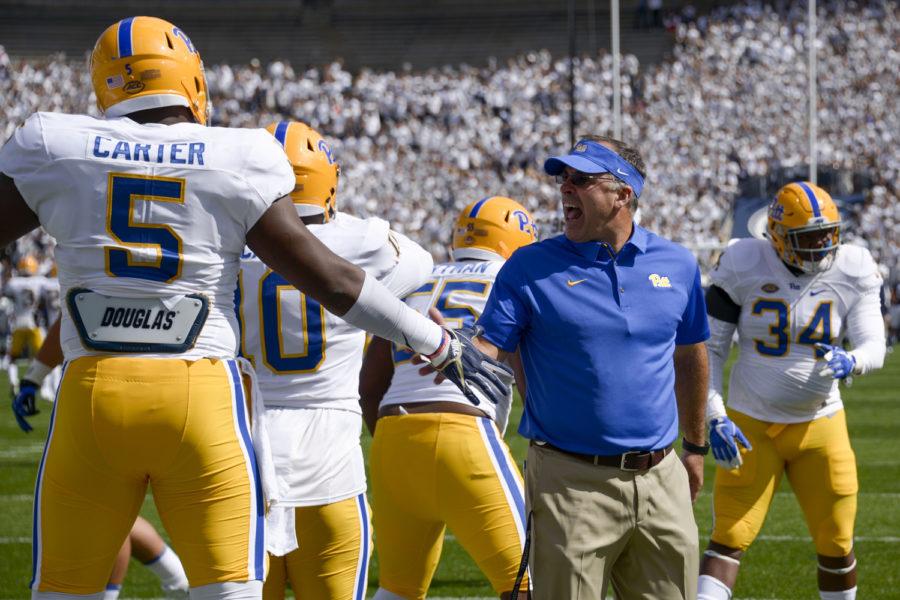 In a press conference with the media on Monday, Narduzzi addressed some of the team’s issues executing plays against Georgia Tech in last week’s game and looked ahead to this week’s matchup against Rice.

One question from last week still lingers — who will be the Panthers’ go-to quarterback?

Narduzzi made a change in the lineup and started Saturday’s game against Georgia Tech with redshirt sophomore Ben DiNucci at quarterback. Even though DiNucci’s presence sparked some early offensive momentum, he was pulled mid-game in favor of redshirt senior Max Browne, ultimately leaving the starting job up for grabs.

Narduzzi addressed this issue early on in the press conference, saying the team would evaluate DiNucci and Browne as the week progressed and then make a decision.

“Obviously Ben can make plays with his feet and he scrambles around and does a lot of things,” Narduzzi said. “But he’s still got a lot of room for improvement, as does Max.”

Not only did the quarterbacks struggle during Saturday’s loss, but the running backs and wide receivers also did not perform to their potential.

Aside from an offense that only produced one touchdown Saturday, the conservative playcalling contributed to the Panthers’ offensive struggles.

Addressing this argument, Narduzzi said he would rather focus on improving the execution of the plays they are currently running than add more creative plays. He even hinted that the playbook will shrink next week.

“So more is not always better. It’s the quality of what you have in,” Narduzzi said. “You may even see the game planning go slimmer so we can get good at what we’re doing. That’s how I’d like to do it.”

Overall, after examining the entire team’s progress this season, Narduzzi is frustrated with the team’s pace of improvement.

“That’s probably the most disappointing thing,” Narduzzi said. “Watching the improvement week to week is not as much as you’d like to see.”

Improvement is necessary, especially with the weekend’s game approaching. While they are not a part of a Power Five conference and are 1-3 on the season, Narduzzi refuses to underestimate the Rice Owls and is only focused on winning instead of giving more players game experience.

“We are going to play the guys that help us win the football game,” Narduzzi said. “All I’m worried about is a win.”