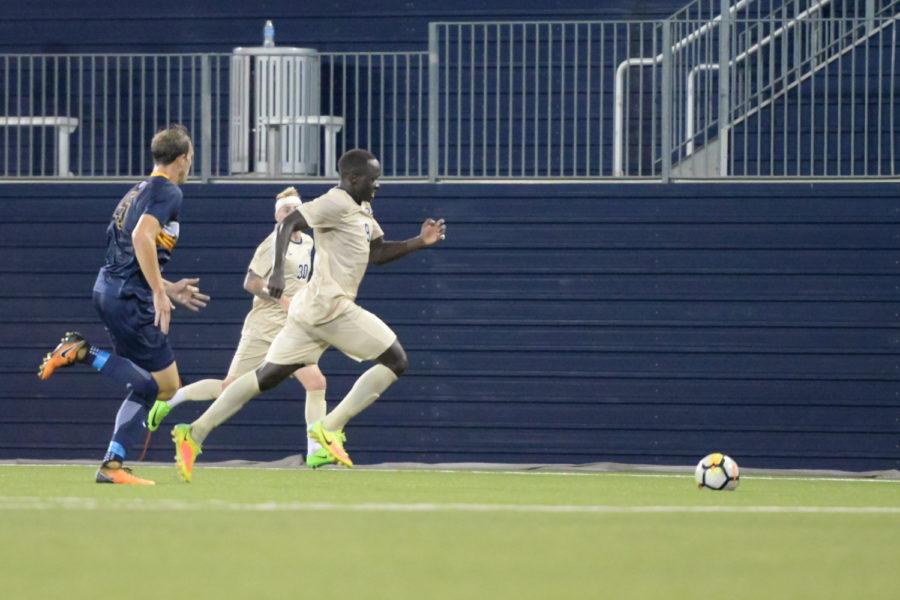 The game started slow, with neither team controlling the ball long enough to get a shot off until the 10th minute. Pitt freshman forward Edward Kizza took a smooth pass from a teammate, beat the defender and faced the goalie before missing just wide of the goal.

In the 32nd minute, sophomore midfielder Alex Peperak scored his first goal of the season on a sliding kick in front of the net — one of three Panthers who netted their first of the season.

“Pep[erak] stepped in in his first start and got his first goal,” redshirt senior defenseman Mauriq Hill said after the game. “Coming off a devastating loss at Clemson, it’s a [big] responsibility.”

“Right from the beginning the guys stayed organized,” head coach Jay Vidovich said. “They showed that they wanted to win the game.”

The Panthers maintained heavy pressure and kept the ball on West Virginia’s side for most of the remainder of the half. This resulted in two more goals for the Panthers.

Pitt starting junior midfielder Joshua Gaspari found the back of the net on an assist from starting first-year forward Alexander Dexter in the 38th minute. Three minutes later, Dexter got in on the scoring, taking a pass from Perez and socking it in.

The half ended at 4-0, with seven shots on goal and no corner kicks for the Panthers. 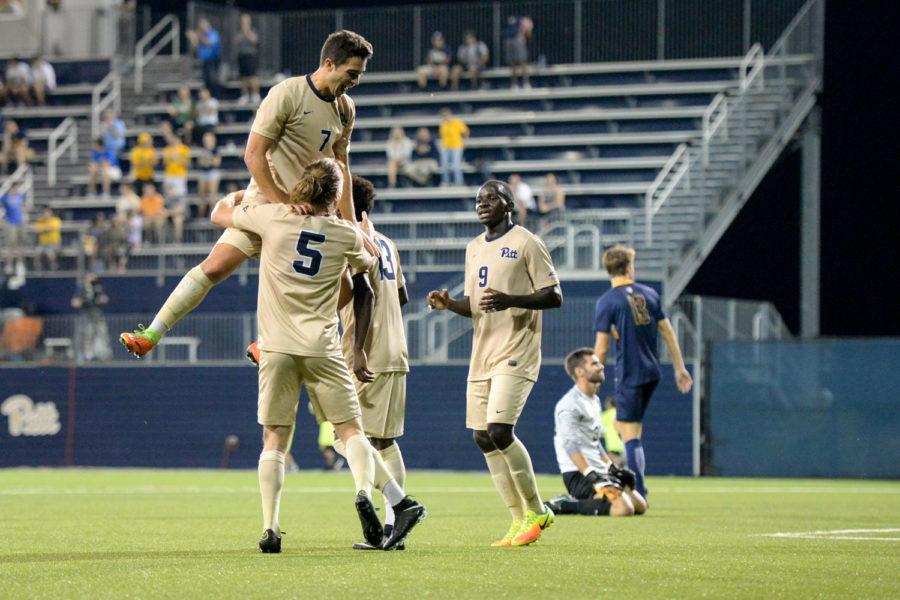 The Panthers celebrated their highest-scoring game in almost two decades after shutting out the West Virginia Mountaineers. (Photo by Evan Meng / Staff Photographer)

Hill said Vidovich told the team at half “that we can be a good team and just take 4-0, or we can be a great team, and not concede, and keep it going. The first 15 minutes try and get another one and keep going.”

The Mountaineers decided to go in a different direction to start the second half, replacing Banick with senior goalkeeper Jose Santos.

“Teams have been doing a lot of substitutions and trying to wear us down in the second half,” Vidovich said. “We just want to make sure that we stay strong mentally.”

The Panthers continued right where they left off, though. Less than a minute into the period, Kizza scored his third goal of the season on a pass from Gaspari, pushing it to the right past the Mountaineers backup goalie.

Kizza wasn’t finished scoring. A few minutes later, on another Pitt foray into the Mountaineers’ side of the field, he sent a shot from the left side of the box to the lower corner of the net, once again making easy work of Santos.

Redshirt freshman forward Tim Ekpone scored Pitt’s last goal of the match off a pass from Dexter at 65:10, yanking the game from the Mountaineers’ reach at 7-0.

Perez attempted one more shot at 73 minutes that was saved by Mountaineer Steven Tekesky. As the clock wound down further, Pitt made a series of substitutions and ultimately walked away with a 7-0 victory.

The Panthers will stay in town for an ACC face off with the Syracuse Orange at 7 p.m. Friday at Ambrose Urbanic Field. Pitt is still looking to snag its first conference win this year.