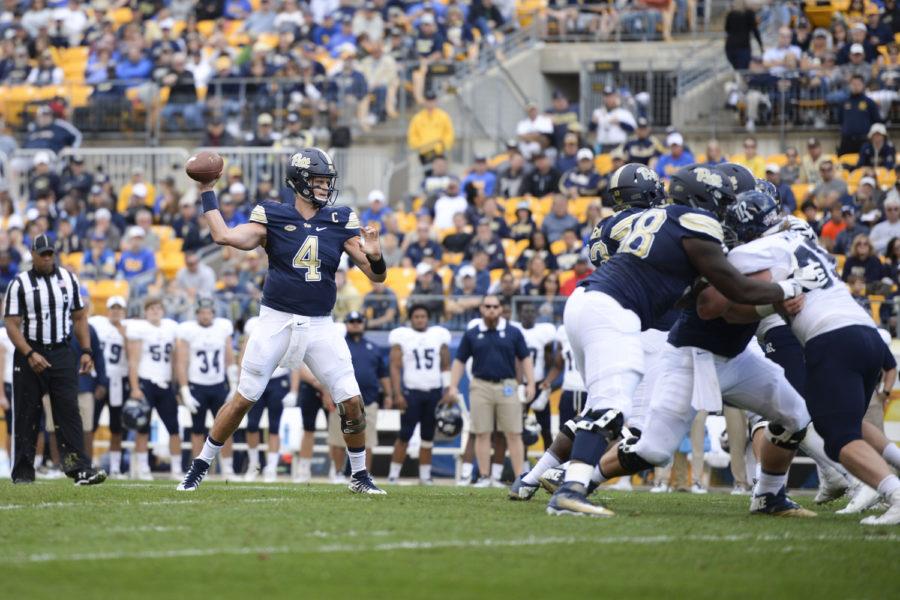 Coach Narduzzi spoke of Max Browne's improved performance in the team's win against Rice this weekend during his press conference. (Photo by Thomas Yang | Staff Photographer)

Pitt football is coming off a victory for the first time since its season-opener, and head coach Pat Narduzzi made it known at Monday’s press conference.

“Obviously it was a much more pleasant Sunday here with our kids,” Narduzzi said. “I couldn’t be happier for our kids. I mean, that’s kind of why you coach this game to be around our guys and to enjoy wins together.”

One of the biggest takeaways from Saturday’s 42-10 victory over Rice was the breakout performance from redshirt senior quarterback Max Browne. Narduzzi took the chance to highlight Browne.

“We hadn’t seen it thrown like that before,” Narduzzi said. “Max is back.”

However, Narduzzi still isn’t committed to naming a long-term starter beyond this week. The question of who will be the starting quarterback has popped up often at press conferences this year after both Browne and sophomore Ben DiNucci have struggled to play consistently.

“Max has got to continue to play well or Ben [DiNucci] will jump back in there,” said Narduzzi. “I trust Max to do that.”

On the defensive side of the ball, Narduzzi noted the play of redshirt junior defensive linemen Dewayne Hendrix and Shane Roy.

“Dewayne Hendrix, I tell you what, he can run and burst. He does some special things out on the field at times,” Narduzzi said. “And Shane Roy has been really, really steady. He was the defensive unsung hero this week just because he does everything right inside and did a nice job.”

Though Narduzzi discussed Saturday’s performance, most of the questions veered toward the upcoming matchup against Syracuse. Narduzzi insisted the team would be more ready for Syracuse’s offense, which confused Pitt last year and led to a 76-61 shootout, though Pitt won.

“We’ve looked at [last year’s game tape] probably 15 times in the last year,” Narduzzi said. “They are going to come out and do some of the same things. They are going to do a lot of things different and you try to prepare for what they possibly could do.”

Pitt’s defense struggled to fend off Syracuse’s fast-paced offense when they ran out of the spread formation. Narduzzi is expecting the same creative offense this year.

“They did some stuff that we had never seen before a year ago … now they’re doing it all the time,” Narduzzi said. “But I’m sure they will have some new creative stuff for us.”

As Pitt looks to win two games in a row for the first time this season, Narduzzi is focused on building on last week’s performance.

“There was better execution. I think our kids stuck with the plan. Overall, even in the run game when it didn’t go, the guys are hitting the right holes,” Narduzzi said. “There was more execution in the passing game as far as doing the right thing.”

Narduzzi emphasized the learning process Pitt is going through, pointing out how young the team is as a whole.

“I think we’re going to be a heck of a much better football team in a year from now if we don’t lose much, and we’re going to have guys that have been through the fire,” Narduzzi said. “It takes time for things to gel and for them to really figure it out.”