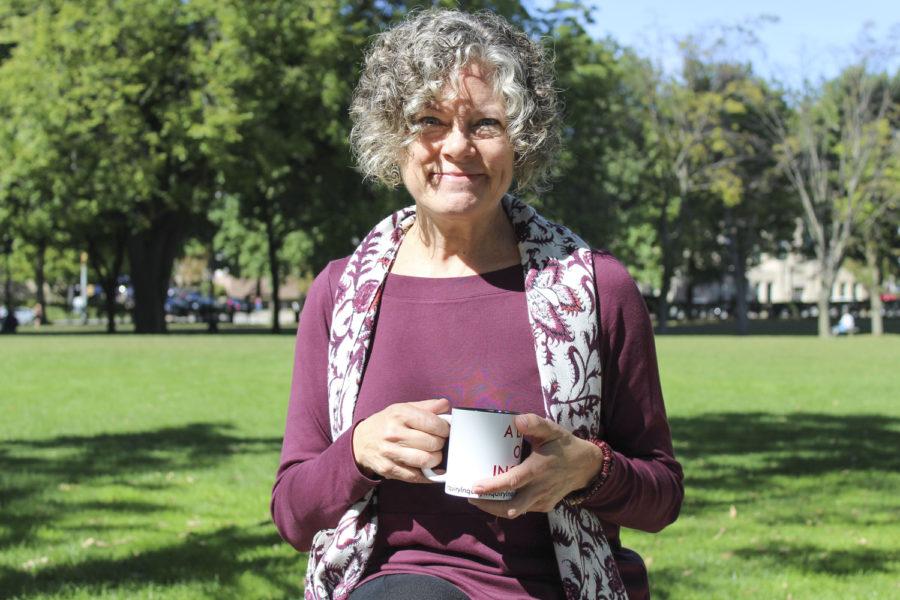 By Nina Kneuer | For The Pitt News

Some professors look like they should be sitting with their students rather than standing in front of them. Others fit the teen movie stereotype of the gray-haired intellectual with wire-rimmed glasses.

Professors on both sides of the spectrum have different ways of using technology and interacting with their students, with their age playing into their ideas about teaching.

Bryan Nelson is a 29-year-old professor in the statistics department. A Pitt alumnus who graduated in 2014, Nelson teaches full-time while taking classes toward a doctorate in instructional technology. While Nelson said that while older professors tend to stick with lectures in the classroom, he prefers to incorporate technology.

“[Older professors] rely on the board a lot,” Nelson said. “As a Ph.D. student … in instructional technology, that’s something I’m really interested in — bringing technology into the classroom.”

Thomas Ricketts, a 68-year-old philosophy professor, has been teaching in the lecture format for 41 years.

“I think my students sort of view me as a Martian, in terms of someone who has very different interests and concerns and tastes than they do,” Ricketts said.

In return, he said he views his students as Martians and is interested in learning what kind of experiences and intellectual interests they have.

Ricketts sometimes wishes he could get to know his students better on more of an individual basis, but since he usually teaches lectures, he doesn’t often get that one-on-one time. He said students today learn differently than he did as a student — specifically, they don’t read and reread books as frequently anymore.

“I can show you some of my old books, and the way they’re dog eared and marked up.” Ricketts said.

Although older professors have decades of experience in their field, Nelson said he wishes they wouldn’t rely as much on the lecture format — which he believes isn’t as effective as other methods of teaching. In the next decade or so, he said we might see more students taking online courses.

The instructor can communicate with students more easily and effectively in online courses, Nelson said, through posting videos, holding online office hours and talking about the material in discussion boards.

“Right now, I think there’s the perception that online courses don’t offer the same quality as a face-to-face course,” Nelson said. “But unless you’ve taken one, that’s kind of a prejudice that I think a lot of students have.”

David de Bruijn — a 32-year-old philosophy professor — is entering his first year as a visiting lecturer at Pitt after being a teacher’s assistant. Like Nelson, he said technology allows classrooms to become more interactive.

But he said the most important aspect of teaching — even with technological changes in the classroom — is communicating with students, which is easier if you can relate to their experiences.

“It’s much easier to introduce [students] to more difficult things when you have a good rapport,” he said.

Matway began teaching in 1982 as an elementary teacher. She taught at Pitt during her graduate years from 1991 to 1999, taught at Seton Hill for four years, then later returned to the Pitt faculty in 2003.

Matway believes younger professors can think of things that professors who have been teaching for a long time don’t think of because older professors, herself included, can get in the habit of doing things a certain way.

“It’s important to hire new faculty — young faculty — because of their new ideas, because they know what the current trends of thought are,” Matway said.

Being only 10 years older than his students, Nelson said he can relate to his students’ social lives. Older professors, he said, need to keep in mind what today’s college student is like.

“I would just say, remember who your audience is,” Nelson said.

Younger instructors need to make sure they pay attention to students and take them seriously, Ricketts said. But as he’s gotten older and more experienced in the classroom, he said he’s become more relaxed and finds himself becoming a better philosopher.

“What I want to say about teaching is that it gets better as you get older,” Ricketts said.

After some reflection, Matway said she would have done things differently as a younger professor based on what she knows now.

“Probably would have slept more, having learned that you actually are more efficient if you sleep than if you stay up all night grading papers,” Matway said.

Regardless of age, Matway said having professors that are excited about their job and excited about teaching is what colleges need for their faculty.

“For me, it’s teaching that energizes me,” Matway said.