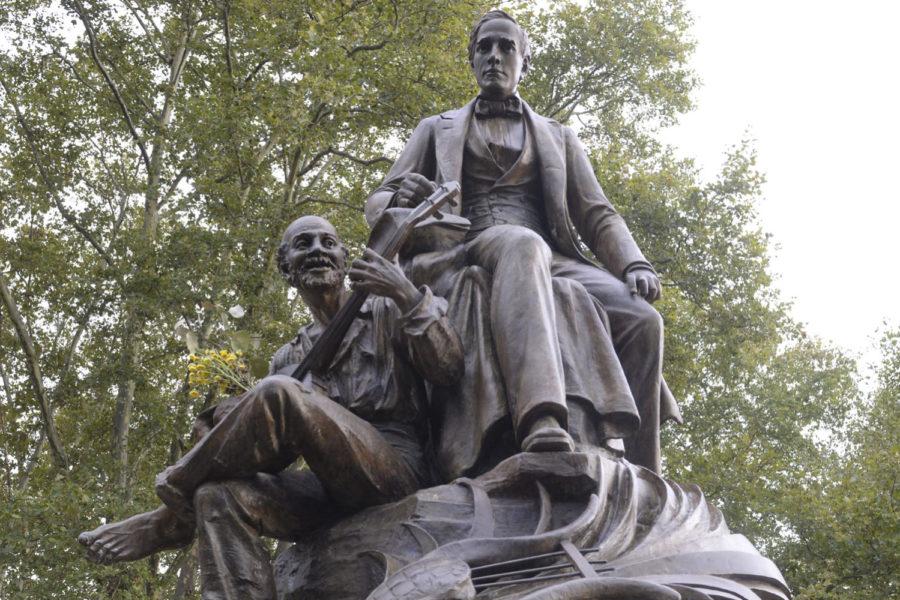 The majority of people in the public hearing agreed that the statue should be removed. (Photo by Kyleen Considine l Visual Editor)

After presenting his viewpoint, Goodwin — an on-and-off resident of Pittsburgh for 50 years who now resides in Schenley Park — asked multiple times to speak again and briefly argued with the chair of the Art Commission, Rob Indovina.

“I was always fascinated and amazed by this person playing the banjo and the smile on his face and [the statue] just, there is something inspiring to me about it,” Goodwin said. “Music has been the one place where race doesn’t matter.”

The City of Pittsburgh Art Commission held a public hearing Wednesday night to hear from community members about whether or not the Stephen Foster statue, which sits on Forbes Avenue near the Carnegie Museum of Art, should stay. Seventeen community members from the audience provided their input at the hearing.

The Art Commission — comprised of seven members appointed by the mayor — is responsible for reviewing works of art owned by the City of Pittsburgh. Commission members sat in a row at the front of the hearing, which took place Downtown at the John P. Robin Civic Building.

Rachel O’Neill, assistant city solicitor at the City of Pittsburgh Law Department, was the first person to speak. O’Neill opened up the meeting by saying the commission has four options to choose from for the statue.

The Stephen Foster statue commemorates Stephen Foster, a Pittsburgh native and musical composer. The statue displays a well-dressed Foster transcribing one of his songs while a black man, toothless and wearing tattered clothing, sits at his feet strumming a banjo. The statue, which has long been controversial in Pittsburgh, has recently gained national attention and criticism.

Following a brief introduction by O’Neill and a PowerPoint presentation by City Archivist Nicholas Hartley about the history of the statue and its controversy, The Art Commission spent the majority of the hour-long meeting listening to commentary from the community members.

President of the Pittsburgh regional section of the National Council of Negro Women Delores Dupree called for the removal of the statue.

“Not only does it depict a white man in a dominant, oppressive posture over a black man portrayed as a slave, submissively playing a banjo at his feet, but it boldly represents the same white man unabashedly claiming the black man’s work as his own,” Dupree said.

And Dupree was not the only person in the room to agree with this — the majority of people in the room agreed the statue should be moved.

Director of the Office of Public Art Renee Piechocki, who attended the meeting, said by allowing the Stephen Foster statue to remain, the City is sending a message that creating a welcoming environment for all is less important than retaining a racist monument.

“More than a hundred years after the sculpture was dedicated, it is time to reevaluate what we value. Please remove the sculpture,” Piechocki said.

Meetings have been called to discuss the Stephen Foster statue four times since 1990, but up to this point no changes have been made. The Art Commission will convene Oct. 25 at 2 p.m. to vote. A two-thirds vote from the commission is required to pass a decision.

Art Commission member Sarika Goulatia commented on the hearings and the statue from her own personal perspective, which she said does not reflect the opinion of the entire commission.

“It glorifies slavery … It’s kind of interesting because they show that it is okay for him to get inspiration from a black artist who he does not consider an artist,” Goulatia said. “I personally am totally for the removal of the statue.”