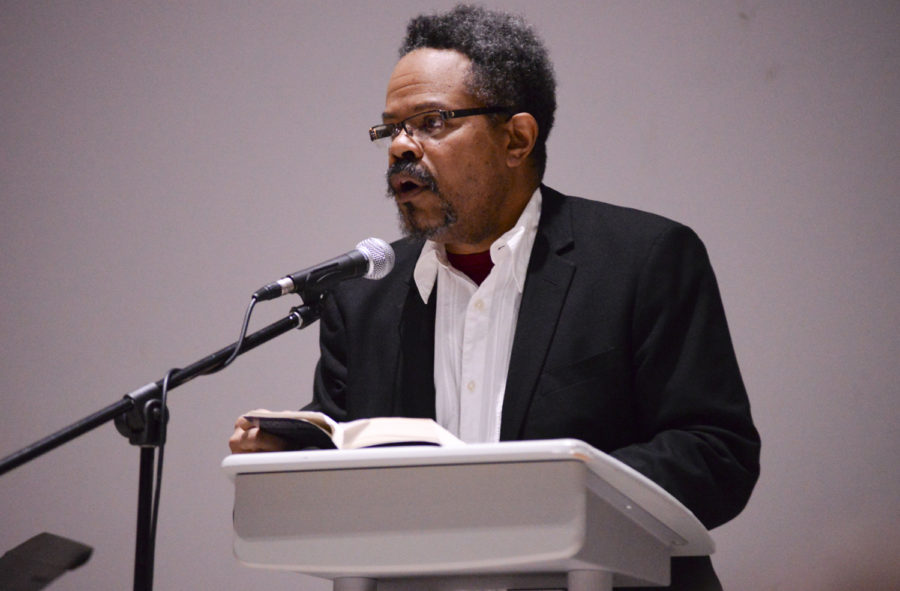 The event was hosted by the Center for African American Poetry and Politics. (Photo by Issi Glatts l Staff Photographer)

Projected onto a screen behind the stage of the Frick Fine Arts building, images of demolition were overlaid with the slow motion image of a woman twirling in a bright blue skirt. Colors shifted from negatives to sepia tone to a washed-out golden color which reflected the clouds of dust and destruction as the building was demolished.

Letasha N. Nevada Diggs and Val Jeanty’s performance filled the auditorium with the rapid pulse of percussion, followed by the softer melody of a string instrument at the Black Futures event this Wednesday as they played to an audience of nearly 100 people.

Hosted by the Center for African American Poetry and Poetics, Black Futures combined poetry readings by John Keene and Renee Gladman with the vocal and electronic art of Diggs and Jeanty. The event celebrated and explored the possibility of black futures — which Gladman described as the spaces, identities and emotions that cannot yet be expressed but are “becoming.”

Jeanty — an Afro-electronica artist — played electronic percussion sounds that correlated with the emotion and tempo of Diggs’ vocals. Diggs, a writer, vocalist and sound artist, ended the piece with a tribute to Geri Allen — the former director of Jazz Studies at Pitt — who passed away this June.

The projected images of destruction in the first performance by Diggs and Jeanty referenced the constant demolition of black churches in Harlem, as well as monuments such as Casa de Fernandez in Lagos, Nigeria. Despite being recognized as a national monument, the building was demolished September 2016.

“These were newly freed Afro-Brazilians who had returned to the continent of Africa and basically constructed their own community and built these buildings. Were there any rights read?” Diggs said. “Looking at the future of black space, is it even there? How do we concern ourselves with these structures?”

Rickey Laurentiis, a CAAPP fellow for creative writing, came expecting to see presentations about the different ideas behind black futures, and said the event evoked his curiosity.

“Blackness is always all the time being erased, so the possibility of looking into the future seems shallow,” Laurentiis said.

Mia Sterbini, a first-year Point Park University student studying acting, said watching the performance inspired her to write about topics like gentrification — which she doesn’t normally think about much.

During the closing Q&A portion of the night, Keene brought up this theme of destruction of history, referencing how it can be particularly harmful to ignore the lingering effects of slavery.

“Rethinking our place in space, in this society, in this world. [We need to] change the narrative from being disposable people,” Keene said.