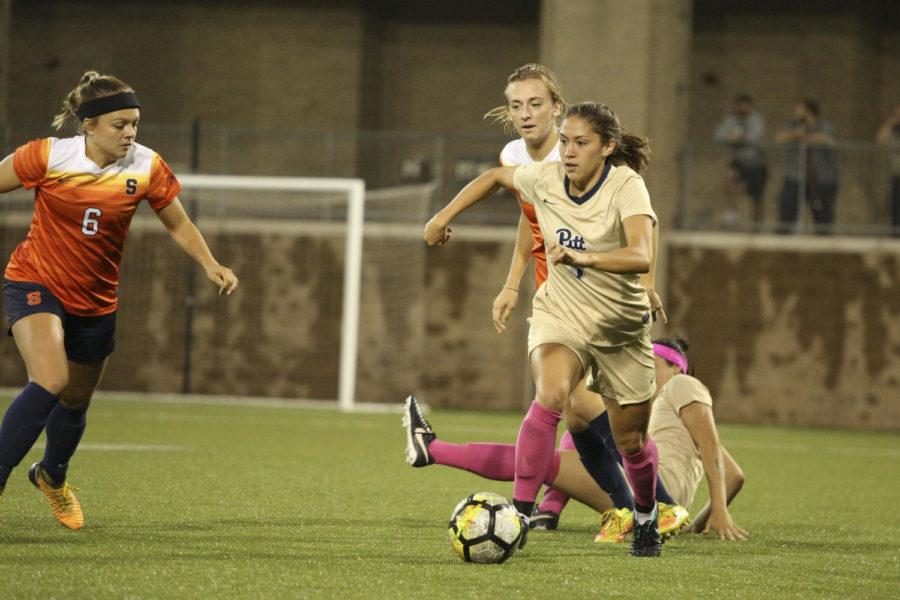 Junior defender Sarah Krause shot three times in the second half, but all attempts were saved by Syracuse. (Photo by Thomas Yang | Staff Photographer)

Though the Pitt women’s soccer team led the game with 15 shots to Syracuse’s eight, the Panthers couldn’t find the mark and dropped Thursday night’s game, 2-0.

“We just have to take it one game at a time,” Pitt head coach Greg Miller said. “And we have to pluck out the good things from this game.“

The game quickly tilted in Syracuse’s favor when the Orange scored in the fifth minute. Syracuse senior forward Alex Lamontagne got the ball in the box and passed it to sophomore forward Sydney Brackett. Initially, Pitt redshirt freshman goalkeeper Katelyn McEachern blocked Brackett’s shot but Brackett powered the rebound into the net and secured the lead, 1-0.

The Panthers’ momentum picked up when first-year midfielder Kendall Higgs tried twice to decrease Pitt’s deficit. Her first shot went high and her second went wide. Pitt redshirt junior forward Taylor Pryce followed Higgs’ shots with her own, but was just as unsuccessful. The Panthers remained down by two with just over 10 minutes left in the first half.

Higgs took another shot, this time on goal, but Brosnan came through with another save. The Panthers spent the remainder trying to gain control of the ball, but when the half closed, they were still down 2-0.

The Panthers opened the second half with a massive change in play. Instead of playing a defensive game, they moved players around and kept the ball in Syracuse’s half for most of the second 45 minutes of the game.

“There was a change in mentality,” redshirt junior midfielder Ashley Moreira said. “Down 2-0 we have nothing to lose at this point. We have to try and get a goal in, try to get a win.”

Pitt junior forward Bel Van Noorden took a shot less than one minute into the half, but kicked it over the post. She also hit one of the game’s strongest shots in the 50th minute, striking the ball from outside the box and forcing a corner.

Pitt took the next three shots of the half. Moreira shot the ball from outside and hit the bar, almost sending the it in behind the keeper.

Moreira played the full 90 minutes and was instrumental in getting the Panthers back into the game, but was still disappointed with the performance.

“We haven’t won a game in the ACC,” Moreira said. “I think today we all hoped this would be our first win, so for it to not be our first win— it’s even more disappointing.”

Junior defender Sarah Krause followed Moreira’s shot with two of her own — one in the 57th minute and another in the 60th minute. She drilled the first shot from outside the box, but it was saved. The second was a long shot which Brosnan punched out of play to deny the Panthers a goal.

Kardesler took her second shot of the game with less than 15 minutes remaining in the half. Brosnan saved her attempt, and when Krause followed up less than a minute later, she saved that shot too.

The Panthers tried desperately to get on the board, with a shot from redshirt junior defender Seyla Perez and another from sophomore forward Christiana Davey. She shot toward the top right corner of the goal, but her efforts were squashed when Brosnan sent the ball sailing over the goal.

The Orange took their final shot in the 83rd minute, but McEachern made one last save. Neither team scored for the remainder of the game, and when the half closed, Syracuse stood victorious, 2-0.

Although Miller was disappointed with the loss, he acknowledged it could have been worse.

“I think being down two goals it would’ve been easy for us to give up a third or fourth or whatever,” Miller said. “They showed some real fight and some perseverance, so I’m proud from that standpoint.”

The Panthers take on the NC State Wolfpack in their next game Sunday, Oct. 8, at Ambrose Urbanic Field.