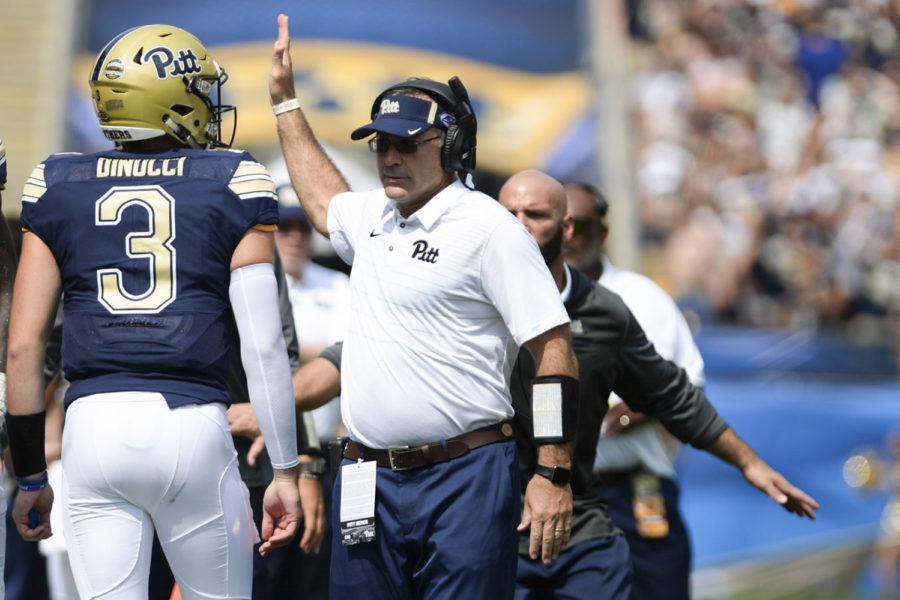 Redshirt senior Max Browne sustained an injury to his throwing arm in the weekend’s loss to Syracuse. Unsure of how long that injury will put him out, Narduzzi is making some changes.

“I feel bad for Max,” Narduzzi said. “We’re still evaluating his body, so that’s still in evaluation, but Ben DiNucci is the guy … we’ve got faith in Ben, and Kenny Pickett will be his backup.”

Even though Narduzzi assured the room of his faith in DiNucci, he also challenged the redshirt sophomore to step up in the upcoming game.

“Everybody can give you more, and I just told [DiNucci], ‘Listen we need more. What you’ve done so far is OK, but you need more,’” Narduzzi said. “It’s the same thing for everybody. Everybody needs to give more.”

The other player who will need to give more is Pickett — the first-year who is now DiNucci’s backup. At the moment, he holds a 100 percent passing completion, but that is only because he threw his sole completed pass in Saturday’s game against Syracuse.

Pickett entered the game when DiNucci’s helmet fell off and resulted in him being removed for a play. Even with so little playing time, Narduzzi has ample confidence in the first-year.

“Kenny is probably as mentally prepared as any freshman quarterback in the country, I think,” Narduzzi said. “He’s way ahead of where DiNucci was when he was a freshman mentally, so he’s a guy that we had confidence in from the beginning … So he’ll be our backup, and we’ll progress that way.”

Pitt’s quarterback dilemma was far from the only issue Saturday. The Panthers surrendered their fourth loss of the 2017 season, remaining winless in ACC play. Narduzzi didn’t come across too upset about the loss — he actually paid homage to the Orange following his team’s loss.

“Syracuse continues to get better,” Narduzzi said. “They’re a good football team. It was a great game for sure for the fans to watch. Much better than last year, I might add, as far as just watching a game and being competitive and more of a defensive game than an offensive game.”

“I think we started off with a bang, and then 98 plays later, we’re a little tired,” Narduzzi said. “Jordan Whitehead — probably gave him too many reps … You don’t see it because he keeps going … But when you start missing tackles, then it affects everybody.”

Once Narduzzi finished with the overview of Saturday’s performance, he took the normal shift to the next game — No. 20 North Carolina State.

“We play a fantastic North Carolina State team, a team that, as a voting member of the USA Today, I’ve been voting for them since week one,” Narduzzi said. “I voted for them all along because I watched what they have done during the summer on tape.”

He acknowledged NC State’s depth throughout its ranks and how that translates on the field. NC State’s experience could be highlighted even more considering Pitt’s quarterback situation.

“Finley is a very smart quarterback,” Narduzzi said. “I don’t think he’s thrown a pick this year. He manages the game well.”

Even with more ACC play looming in the future, Narduzzi assured everyone the Panthers’ focus is on the NC State matchup. They’re not getting ahead of themselves.

“One at a time. If we start looking ahead, we’re going to be in big trouble,” Narduzzi said. “We’ve got to focus on North Carolina State. We’ve got a great football team coming in homecoming weekend, and it’ll be a great challenge for us this football team.”