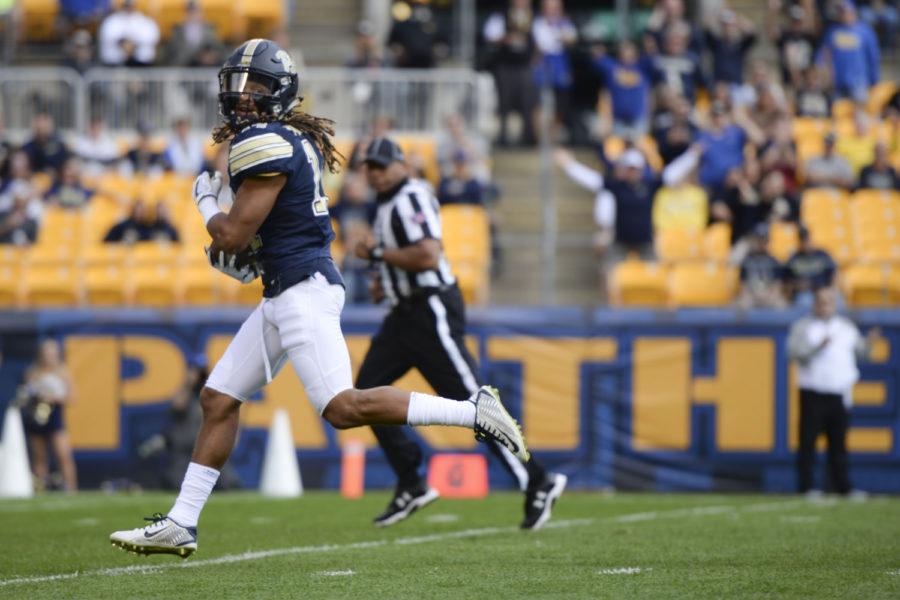 Pitt football lost to Syracuse on Saturday with a final score of 27-24. (Photo by Thomas Yang | Staff Photographer)

Pitt’s defense — particularly the secondary — has become an easy target for criticism during the last two years. There have been low moments, such as last year’s 37-36 loss at North Carolina and this year’s 59-21 loss to Oklahoma State, but in Saturday’s loss against Syracuse, the Pitt defense earned some long-awaited praise.

Coming into the game, Syracuse’s high-powered offense was expected to carve up an overmatched Pitt secondary. Throughout the first half, though, the Panthers defense kept pace with the Syracuse offense, holding them to just 10 points at halftime.

The Panthers’ first-half defensive success was in large part thanks to the pressure that defensive linemen and linebackers put on Syracuse junior quarterback Eric Dungey. Junior linebacker Oluwaseun Idowu consistently rushed the quarterback and contributed both of his two sacks in the first half.

Junior lineman Dewayne Hendrix and senior lineman Allen Edwards both turned in solid performances as well. Pitt head coach Pat Narduzzi singled out Edwards and Hendrix two weeks ago on his radio show as key contributors, and the two have continued to make a difference on defense. Hendrix created a lot of pressure off the edge of the offensive line, forcing Dungey to step up in the pocket and helping the Panthers pressure him early.

While the front line did its job for the most part, the biggest stars of the Panthers’ defense were senior cornerback Avonte Maddox and junior safety Jordan Whitehead in the secondary.

Maddox shadowed Syracuse receiver Steve Ishmael, tallied up less than 100 yards receiving for the first time this year. While Ishmael did break loose for a 35-yard touchdown in the fourth quarter, he was obviously limited by Maddox’s coverage.

Whitehead made his impact all across the field, leading the team with six tackles. He was a commanding force throughout the whole game, his performance highlighted by a pass breakup over the top of Syracuse senior wideout Ervin Philips with six minutes remaining in the first half.

Pitt’s defense was so significantly better than its own offense that Whitehead was the Panthers’ best player on the offensive side of the ball as well. In addition to his pass deflection and 13 tackles, Whitehead led the Panthers in rushing with 73 yards and a touchdown on seven carries.

The Panther’s second-half performance wasn’t nearly as impressive, as Dungey completed an imposing 15 of 17 passes. The play dropped off because of Syracuse’s dominant possession.

Pitt’s longest drive in the second half lasted nine plays — Syracuse didn’t have a single drive under 10 plays long for the half. Pitt’s inability to sustain any real offensive threat forced the defense to take the field for nearly 18 minutes of the second half. Syracuse’s dominance exhausted the Panthers’ defense, culminating in a 15-play, six-minute 23-second drive that left Pitt with only 52 seconds to tie or win the game.

Dungey finished the game with 365 yards and three total touchdowns, but those numbers aren’t indicative of Pitt’s defensive performance, especially considering the expectations. After last year’s 76-61 shootout, and Syracuse’s hot start to this season, keeping the Orange’s high-powered offense contained for most of the game was a victory in itself.

While the Panther defense still may not be dominant, Saturday’s game certainly showed it has made great strides this season. And with the way Pitt’s 2017 campaign has been going, that’s actually impressive. Now, if the Panthers can maintain a solid performance for the entirety of a game, they stand a chance of making this season — and future seasons — worth watching.