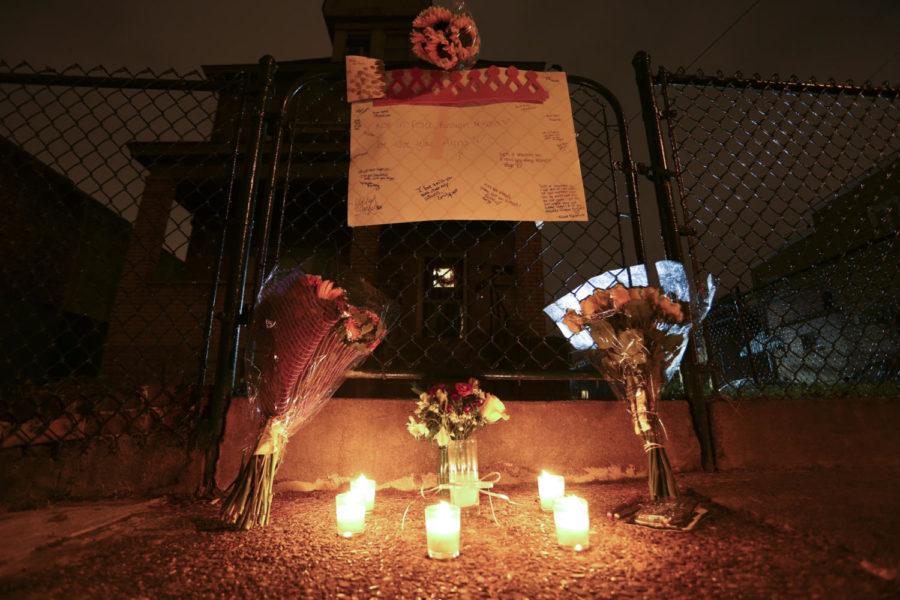 A homicide investigation is underway after Pitt student Alina Sheykhet was found dead in her Oakland apartment Sunday morning.

Pittsburgh police have obtained an arrest warrant for 21-year-old Matthew Darby — Sheykhet’s ex-boyfriend whom she filed a protection-from-abuse order against in September. His charges include homicide, burglary, theft, flight to avoid apprehension and possession of instruments of crime, according to an email statement from Pittsburgh police spokesperson Sonya Toler.

[Latest: Darby’s attorney calls on his client to turn himself in for questioning]

Detectives are asking for the public’s assistance with locating Darby and said to call the Violent Crime Unit at 412-323-7800 with any information.

“We do not believe at this time that this was a random act of violence,” Pittsburgh Police Chief Scott Schubert said in a statement. “There is no continued threat to Oakland residents and the University communities.”

The Allegheny County medical examiner’s office called the death a homicide Monday and said the cause of death was “sharp/blunt trauma of the head.”

Police and paramedics were first dispatched to the scene Sunday at 8:56 a.m. They arrived at a residence on the 3500 block of Cable Place and discovered a female victim on the second floor of the residence. Paramedics pronounced her dead at the scene, according to a release.

Weeks earlier, on Sept. 26, Darby was arrested for breaking into Sheykhet’s Cable Place residence, according to a Police statement. Darby was a student at Pitt’s Greensburg campus but withdrew from the University earlier this month, according to Pitt spokesperson Joe Miksch.

Sheykhet wrote in the restraining order request that Darby climbed up the gutter on the side of her house and broke through the second-floor window because she stopped returning his calls after they broke up. She also described past incidents of “grabbing, pushing” and “emotional abuse.”

The temporary restraining order was issued Sept. 21 with a final hearing set for Oct. 5, but it’s unclear from Allegheny County’s online records if the hearing took place. Darby was arrested Sept. 26 and posted the $10,000 bail — but that bail was revoked for a violation of bail release conditions on Sunday, the day Sheykhet was found dead.

Darby was also arrested in March on charges of rape and sexual assault in Indiana, Pennsylvania. He posted the $10,000 bail March 23 in the active case. Darby’s attorney, David Shrager, told The Pitt News he is currently investigating and is not ready to comment on the case.

The Sheykhet family declined to comment when The Pitt News contacted them Monday evening.

The Pittsburgh Post-Gazette reported that Yan Sheykhet, Alina’s father, discovered her body when he and his wife were picking her up to go on a breast cancer awareness walk in Allison Park.

“She didn’t answer the phone. She didn’t text us,” Mr. Sheykhet told the Post-Gazette Monday. “So we tried to open the door. It was locked. I pushed the door and I found her laying on the floor.”

The University expressed condolences to Sheykhet’s family and said they are focused on cooperating with police and supporting the Pitt community.

“The University of Pittsburgh community is heartbroken over the loss of Alina Sheykhet, and we send our deepest sympathies to her family and all who knew her,” Miksch said. “The University Counseling Center will be open for walk-in appointments beginning Monday and can be reached around the clock at 412-648-7930.”

Hunter Smith, a Slippery Rock junior political science major, first met Sheykhet when they took a musical theater class together when they were about 13 years old. They became closer friends when they both attended Montour High School, and Smith said their friendship continued through college.

“She was always the person that someone wanted to be around. She was always the one who was happy and laughing and smiling,” Smith said. “People just gravitated toward her. And she was friends with everyone. I don’t think I could name anyone that was like ‘oh, I don’t like her.’”

Johnny Abel, a junior sports management major at West Virginia University, was friends with Sheykhet all four years of high school. He said those who knew her will miss her enthusiasm and ability to lighten everyone’s mood. Abel said he was shocked to hear of Sheykhet’s passing.

“I couldn’t believe it. I was devastated,” Abel said. “It just doesn’t seem real to me.”

Editor’s note: This story has been updated.