Pitt Students Pitch Against the Clock 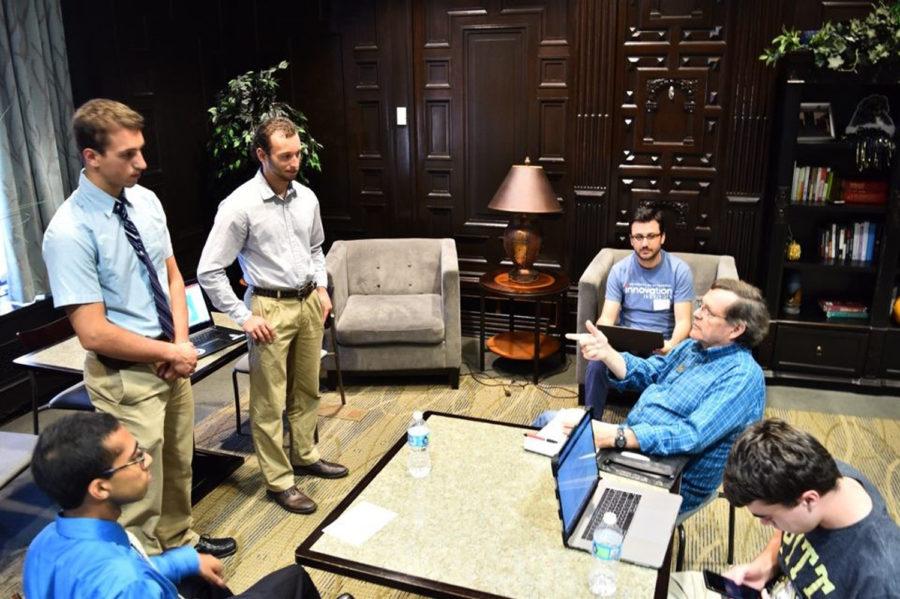 In the corner of the O’Hara student lobby Saturday morning, Jacob Saletsky practiced his pitch for an app, stopping to listen to the critiques and suggestions of his teammates.

“You speak too much on this slide,” Veysel Gokbel said.

“Can I just — real quick — we never directly asked that, maybe just say we were able to ascertain,” Andrei Mihailescu said.

The junior mechanical engineering major would then resume his speech about Tag Along: The Plus One Shopping App, a peer-to-peer shopping network that would allow users to pay someone to pick up groceries they forgot to get.

First place went to Maternal Assistance Programming — an algorithm designed to detect bleeding in pregnant women. Common Sense — a team that pitched a portable, handheld breath sensor to detect cancer — came in second, and Ghost Trekkers, with an idea for a YouTube show devoted to ghost hunting, came in third.

The Startup Blitz is a business innovation competition held every fall and spring and is open to all Pitt grad students and undergrads. Participants show up the first night, some with their own pitches, others looking to see which pitches pique their interest. Once people present, their peers vote to select the 10 most intriguing and well-presented pitches. If a person’s idea isn’t chosen or they didn’t pitch, then they can join up with one of the winners to work on their idea.

Participants then have the rest of that night and the next morning to research their idea and prepare a PowerPoint presentation to be judged by a group of business professionals. First, second and third place winners receive $1,500, $1,000 and $500, respectively, and are allowed to move on to the Blast Furnace Competition — the Innovation Institute’s student accelerator that provides student entrepreneurs with the knowledge and skills they need to commercialize their ideas — without application.

Tag Along was one of nine pitches voted from the original 19 pitches on Friday to move on to Saturday’s final round — the disparity between ninth and 10th most popular pitches was too large to go with 10. Competition narrowed to eight when one student with a pitch became ill Friday night and chose not to proceed to the next round. Ideas allowed to move on ranged from a device for predicting PTSD episodes to a tool that tests a person’s saliva for traces of food they are allergic to.

Mihailescu said the Tag Along team is looking for as many ways as possible to get publicity and funding for their idea — Startup Blitz being one of them.

“It’s something [Saletsky, Vulimiri and I] started maybe two or three weeks ago, honestly, so it’s something very new that we have,” Mihailescu said. “Given the opportunity and some sort of funding, we’d really like to make this a reality.”

Gokbel came to assist the three engineering undergrads with their pitch after they presented it Friday night. He originally came to the Blitz to pitch his own idea for an app that connects students with available freelance proofreaders and editors. His idea did not move to the next round, so he stuck around to lend a hand to the Tag Along team.

But Gokbel is currently participating in the Blast Furnace program and credits the Institute’s programs with helping him develop his idea.

“We have a lot of ideas that are killed in our minds,” he said. “[Institute events] provide an environment for motivation, strategy and networking to bring them to life.”

Babs Carryer, director of education and outreach at the Innovation Institute, said students from across the University — from the Dietrich School of Arts and Sciences to the School of Public Health — come to participate in the Blitz and bounce their ideas off people with different skill sets than their own.

“[A lot of students] don’t have the chance to interact with students outside of their discipline, and so this gives them a platform to do that,” Carryer said.

Four entrepreneurs-in-residence — Don Morrison, Randy Eager, Jeanine McCreary and Joanna Sutton — were present both days to help students understand what should go into their presentations and finalize their pitches.

Eager is a first-time Blitz EIR and said pitching in the business world is “like the oxygen” needed to keep an idea alive.

McCreary said this is her second year serving as an EIR and she was thrilled by how hardworking and invested students were in their ideas.

“I was asked by students who wanted to work with me to do conference calls at 10, 11 p.m. [Friday night],” she said. “It’s a challenge … but they wanted to work so I’m supportive.”

McCreary started her first business — a shopping service — while she was in college, and said the approach to student business has changed since the years she did it.

“Not a lot of people did this kind of thing when I was in college, and now you have students coming up with ideas in tech and medicine,” she said. “They’re gonna change the world.”

Judging began at 1 p.m. Saturday. Presentations were examined based on three categories — how remarkable the idea is, its marketability and the team’s presentation.

The winning pitch earned co-founders Michelle Pressly and Kutay Sezingel — graduate students in chemical engineering — $1,500 to further develop their idea, which will utilize an algorithm to predict and prevent maternal hemorrhaging during childbirth.

Pressly said the idea originated at a conference in the spring of 2016, when a clinician approached Pressly about taking her research on modeling how blood clots and applying it to treatment of actual patients.

After approaching Sezingel about joining the endeavor, Pressly sought advice from her professors and academic advisers, who referred her to the Startup Blitz to advance the pitch.

“I wanted to do this because it would force me to get better at communicating the idea, and that’s exactly what I need to do for grants, for start-up reasons,” Pressly said.

The duo took on two new members on the first night of the Startup Blitz — Toby Sheung, a senior neuroscience major, and Alex Wallace, a senior mechanical engineering major.

“It’s really good to have other people come in that are more skeptical, that haven’t read as many papers as you about it,” Pressly said. “You have to get them up to speed in a way that’s tangible and accessible, and they helped me get there.”

Carryer said passion is a key element in being able to pitch an idea and then make something out of it, but besides that, aspirational entrepreneurs need to have intelligence and grit.

“You do need to have passion … but it’s not the key component,” Carryer said. “You’re gonna need to have the smarts to be able to do it, you’re gonna have to have a lot of tenacity and what I call stick-to-itness where you don’t give up.”