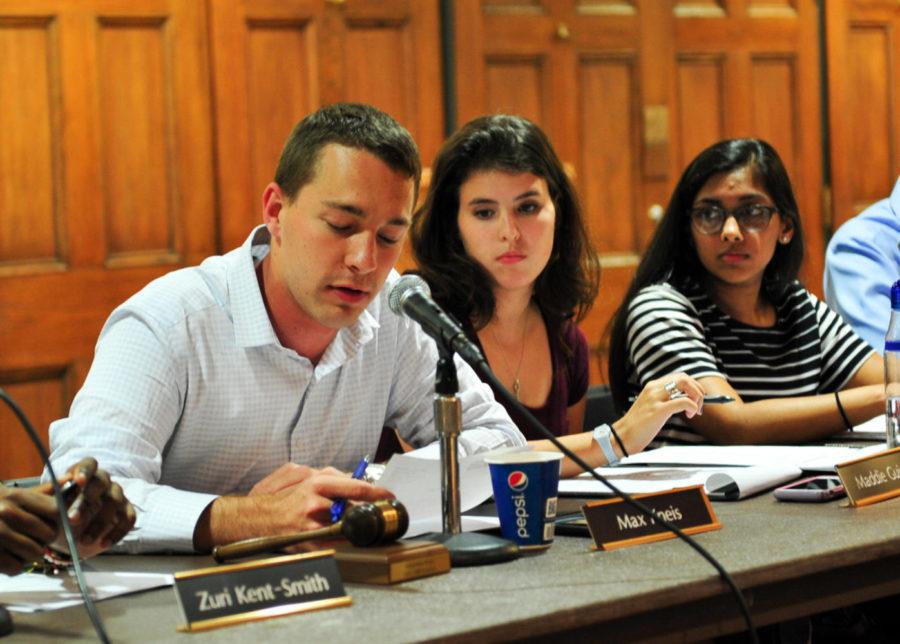 While it’s common at Student Government Board meetings to hear from students, Associate Dean of Students Steve Anderson took the opportunity to address the recent death of Pitt junior Alina Sheykhet at Tuesday night’s meeting.

“I just wanted to obviously take a short minute here to acknowledge what happened this weekend, the tragic passing of Alina,” Anderson said. “If you see something, say something. Speak up. Don’t hesitate to reach out.”

SGB did not make a statement at the meeting after consulting with the dean prior to the start of Tuesday’s meeting.

“I just didn’t feel comfortable with an ongoing investigation to kind of bring it up,” SGB President Max Kneis said in an interview after the meeting. “[Anderson] and I agreed that he would be the best person in the room to speak upon it.”

The board also announced an initiative where they will give students a slice of pizza if they call lawmakers to pressure them to pass a state budget and approve Pitt’s state funding.

Kneis said Pitt was promised $150 million by the state government back in June. But the Pennsylvania House has yet to pass a revenue package, which the government must pass before funding Pitt.

Kneis said a phone banking event will be held this week on Wednesday, Thursday and Friday from 11 a.m. to 1 p.m. in front of the William Pitt Union to pressure lawmakers. Three landline phones will be set up for students to call their representatives and encourage them to approve the state budget. Kneis said students will be given a script, and calls should take about 30 seconds each. Participants will receive one slice of pizza for each call they make.

“Our goal is to generate a significant volume of calls and make sure students voices are heard,” Kneis said.

Continuing SGB’s pressure on lawmakers, Executive Vice President Zuri Kent-Smith announced a new project he is overseeing, which intends to show support for recipients of Deferred Action for Childhood Arrivals — an Obama-era executive order that allows young immigrants brought to the country illegally by their parents to stay in the country and receive an education. President Donald Trump said he plans to rescind the order.

Kent-Smith is unsure when or where this “DACA drive” will take place, but it should be decided in the next few weeks. When the event is established, students should be able to walk up to a table and sign pre-written letters asking that DACA not be rescinded. These letters will then be delivered to the students’ respective state representatives with help from the Office of Community and Governmental relations.

“I think it’s important not to punish [DACA recipients] for setting up a life in a country that they were brought to,” Kent-Smith said. “They had no say whether they were going to come or not.”

SGB also announced that its partnership with Pitt’s Rainbow Alliance for a fundraiser to counteract the Westboro protests Friday — which aimed to raise $20 for each minute the WBC protesters spent on Pitt’s campus — raised twice its initial goal of $600. The $1,200 will go to Proud Haven to support homeless LGBTQ+ youth.

“We want to thank everyone who donated and gave messages of support,” Kneis said. “We’re proud Pitt responded in such a positive and impactful way.”

Board Member Maddie Guido also announced that the Panther Program of the Month — an adaptation of Panther of the Month highlighting a Pitt organization’s event or activity —  had decided its prize will be a $50 credit to Sodexo and advertising through the Student Affairs office.

Board Members Ami Fall and Alex Spenceley were absent this meeting since they were attending “The Haze” —  a one-woman play about sexual violence by playwright Heather Marlowe. The event was sponsored by SGB, Title IX and the Office of Sexual Harassment and Assault Response and Education as part of Mental Health Awareness month.

SGB will not meet Oct. 24 because the board will be in Washington, D.C., for the Atlantic Coastal Conference Advocacy Days.

Mock Trial Organization requested $1,743.59 for competition expenses. The board approved in full.

National Society of Leadership and Success requested $476.63 for a conference request. The board approved in full.

The Songburghs requested $250 for competition expenses. The board approved in full.

Hindu Student Council requested $6,136 for a program expense. The board approved in full.

Pitt Racquetball Club requested $800 for a competition request. The board approved in full.

Project Potter requested $145 for general travel. The board approved in full.