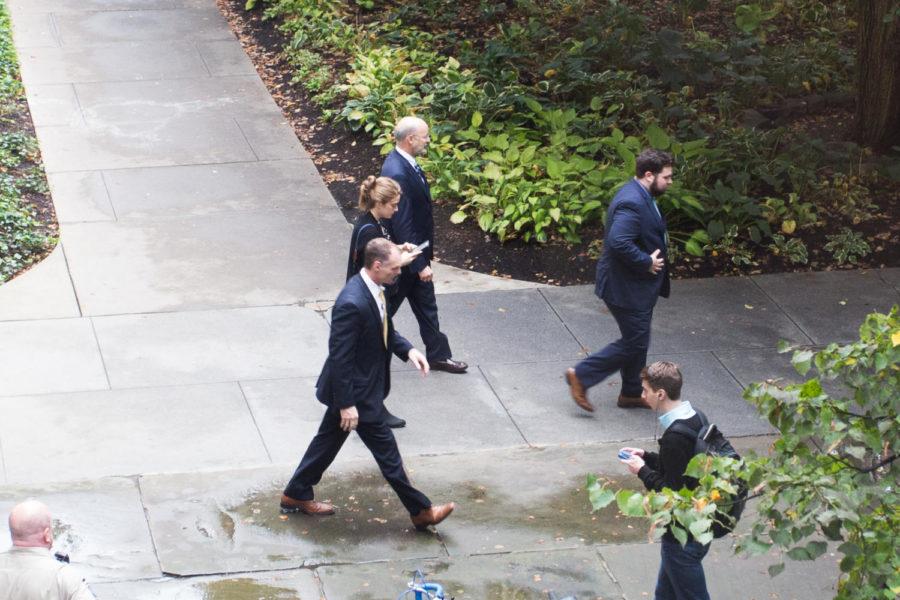 Wolf met with Gallagher to “reassure him of his commitment to the state-related universities,” Wolf’s Press Secretary J.J. Abbott said in an email. The meeting comes as Pitt’s state funding is becoming more and more uncertain. Pitt receives $147 million in state funding per year, which helps reduce tuition for in-state students. But state lawmakers have yet to pass a revenue package, which must happen before approving funding for state-related universities — Pitt, Penn State, Temple and Lincoln.

Gallagher sent an email to the Pitt community early Tuesday warning of a possible mid-year budget amendment, including tuition increases.

“State funds enable us to lower the cost of in-state tuition by about $11,000 per student,” Gallagher said in the email. “Without this support, thousands of students from Pennsylvania would see tuition rates rise at Pitt and other flagship institutions.

No state funding for Pitt will be devastating. Join me in telling Harrisburg that you stand #WithPitt https://t.co/CcsRvUkQdB pic.twitter.com/7fn51oBahb

Even if Gov. Tom Wolf borrows more than $1 billion, as he has promised, Gallagher is worried the fate of spending bills to fund the four state-related universities — Pitt, Penn State University, Temple University and Lincoln Memorial University — will remain uncertain.

While there does not seem to be active opposition from Pennsylvania legislators to fund state-related universities at this time, state-related funding is essentially frozen until additional means of gaining revenue are passed by the state congress.

“Amid budget delays and ongoing debate, we did not want to pass Harrisburg’s uncertainty along to our students and their families,” Gallagher said. “However, with our first semester approaching the mid-way point—and no state revenue plan in place—we may be forced to assume that no state funding is forthcoming and amend our University’s budget accordingly.”

Though Gallagher avoided partisan politics in his statement, Wolf’s office put the blame for the budget impasse directly on Republican lawmakers.

Urgent! We may lose ALL state funding this year & we need your help. Let PA officials know you stand #WithPitt: https://t.co/Q1UUC7xVZf https://t.co/92uHagLKbU

The chancellor sent another campus-wide email in early September to faculty, staff and students urging people to contact leaders in the Pennsylvania House of Representatives. Text within the email linked to the with Pitt portal, a website created by the University that includes ways to contact state lawmakers and information about Pitt’s impact on Pennsylvania and its economy.

Students are involving themselves in lobbying efforts as well. Pitt’s Student Government Board kicked off a phone banking initiative Wednesday to push for funding. The event — held from 11 a.m. to 1 p.m. outside the William Pitt Union —  offered a free slice of pizza to anyone who called a state representative and read a prepared prompt.

With about 10 minutes to go in Wednesday’s phone banking event, Jessica Chong, the chair of the community and governmental relations committee for SGB, said roughly 90 people had already made calls.

“Right now we have $0 from the state,” Chong said. “We’re pretty much just calling to annoy them essentially into really sitting down and passing this and figuring out a compromise.”

SGB will phone bank again Thursday and Friday of this week from 11 a.m. to 1 p.m.

As part of the campaign, SGB is also encouraging people to use two hashtags — #keepPittpublic and #withPittPAwins.

Without state funding, Gallagher said the University would effectively become private, which would shift the University’s focus more toward national recruitment and branding. This new focus would alter the composition of Pitt’s student body, he said in the Post-Gazette article.

Katelin McLaughlin, a sophomore political science major and in-state student, was one student that participated in SGB’s phone banking event. She said the cause motivated her more than the pizza.

“I think being politically active is really important,” McLaughlin said. “We’ll be paying the cost if we don’t get the funding we need.”