Big changes may come to Bigelow 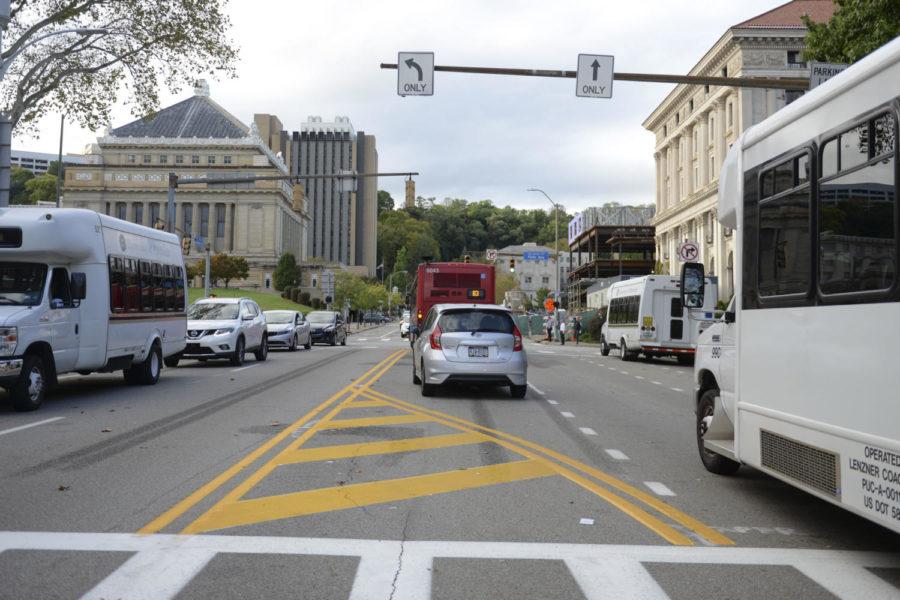 Pitt is trying to create a plan to make Bigelow a safer street for drivers, pedestrians and cyclists. (Photo by Isabelle Glatts | Staff Photographer)

By Madison Hook | For The Pitt News

The City of Pittsburgh closed Bigelow Boulevard in 1996 for 29 days. Then-Mayor Tom Murphy said they felt closing Bigelow “would make for … a more attractive campus.”

The trial program didn’t continue after those 29 days. According to city councilman Dan Gilman, “it posed a lot of issues for traffic.”

Though Bigelow isn’t going to be closed any time soon, Pitt has partnered with the city’s Department of Mobility and Infrastructure, Public Works and City Planning to create a plan to make Bigelow a safer street for drivers, pedestrians and cyclists.

It comes as no surprise to Oakland residents that Bigelow — which serves as one of the quickest routes from Forbes Avenue to Fifth Avenue — experiences heavy amounts of traffic throughout the busy workday. Numerous cyclists and stressed students flooding the intersection only add to this controlled chaos.

Gilman, who represents the Eighth district, which includes Oakland, is an advocate for the efforts to make Bigelow a safer road. He stressed the importance of renovations throughout the various streets, crosswalks and bike lanes in Oakland — especially when it comes to Bigelow.

“Our goal is to reboot the street to make it safer for everyone,” Gilman said.

The city installed interim bike lanes along Forbes in August, hoping to help cyclists’ safety in  Oakland. Paul Supowitz — Pitt’s vice chancellor for community and government relations — said the short term installments have opened the conversation between the University and the City in hopes of making more permanent changes to benefit the community.

“We’d like to consider a more long-term solution,” Supowitz said. “Making the street safer for all modes.”

Dylan Broschart, a junior exercise science major, often rides his bike to and from classes and said improvements to traffic control and bike lanes would be beneficial.

“I listen to music a lot when I ride, which could sometimes cause dangerous situations in the busy streets of Oakland,” Broschart said. “I think increased bike lanes, like those near Schenley, will assure my safety as I cruise along this beautiful campus.”

Supowitz hopes they can create an improved version of the street to make it safer for people like Broschart. This time, it won’t involve closing the street, but rather several smaller changes.

“We would take the crosswalk [in front of the Cathedral] and move it to the middle of the block to ease traffic flow,” Supowitz said.

He said the change would minimize congestion by giving motor vehicles more space along Bigelow when making the left turn from Fifth.

While Gilman and Supowitz said all ideas are conceptual at this point, they both said the current plan includes the addition of left turning lanes for cars and bump-out curbs that would decrease the length of the crosswalks along both Forbes and Fifth.

As for the estimated cost and start of the plan, Gilman said both aspects are dependent on how much the state allots toward the project through grants. The safety renovation costs are hard to pinpoint, he said, but he estimated they would be “over a million [dollars] and under five.”

Gilman and Supowitz said the plan for Bigelow stands in the development stage for now, and is open to receiving comments from community members regarding the renovations.

“We believe our streets should be safe for all modes of transportation,” Gilman said. “And no better street to fix than Bigelow.”