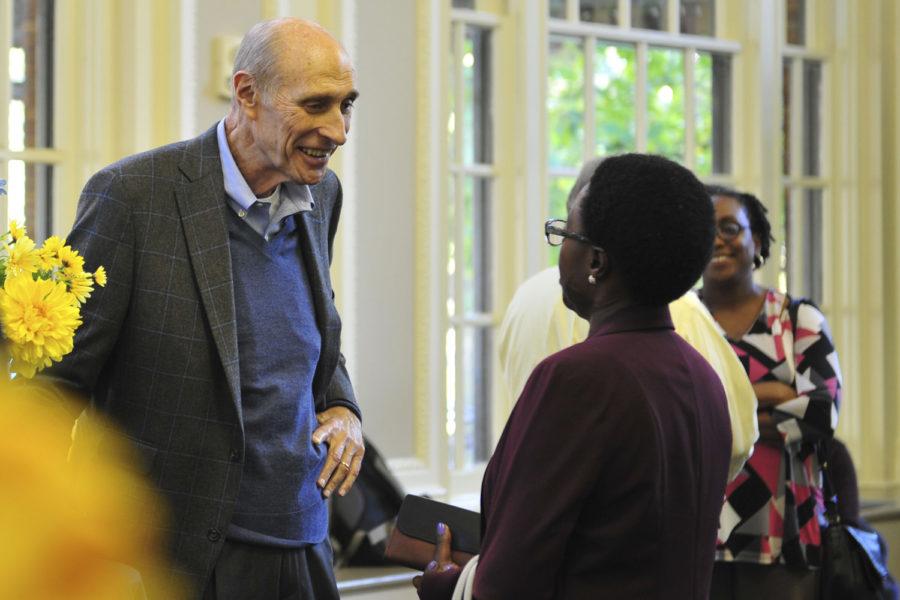 About 50 people gathered in the William Pitt Union Monday at a kickoff event for the Interfaith Dialogue and Engagement Office. (Photo by Roger Tu | Staff Photographer)

By Sarah Frumkin | For The Pitt News

Kyle Wyche was peacefully meditating in the prayer and relaxation room on the third floor of the William Pitt Union when a group of Muslim students walked in to pray.

The junior ecology major struck up a conversation with one of the Muslim students afterward, who turned out to be as interested in Wyche’s meditation as Wyche was in his prayer rituals. The two exchanged numbers and went to lunch together the next day.

Wyche said he’s still friends with the student he met, and the two meet often for meals and coffee.

“That one instance opened us to different experiences and created a friendship,” Wyche said.

Wyche shared this story of shared spirituality at the kickoff for Pitt’s newest division — the Interfaith Dialogue and Engagement Office. The creation of the office will serve as an opportunity to exchange ideas about how Pitt students, staff and faculty can engage in more conversations about religion and secular spirituality, explore their beliefs and have an impact on the community, according to Summer Rothrock — director of the Office of Cross-Cultural Leadership and Development and member of the Interfaith Dialogue Planning Committee.

“I think … this is something the University community is going to embrace and welcome. Everyone seemed really positive as we sent information about the event,” Rothrock said. “The fact that people were hanging around and talking makes me think we’ve already sparked some dialogue.”

Vice Provost and Dean of Students Kenyon Bonner spoke at the kickoff on behalf of the University. He called the Interfaith Dialogue and Engagement Office a representation of Pitt’s commitment to diversity and inclusion.

“We have always believed that diversity and inclusion are central to our mission. But we realize that, in today’s climate, simply embracing those values is not enough,” he said. “Now — perhaps more than ever — we must actively seek to promote a climate of understanding and mutual respect.”

In an interview after his speech, Bonner said the office does not have concrete plans yet, but will invite speakers and create programs designed to encourage discussion across faiths.

“This has been a year in production,” Bonner said. “It’s still engaging students and still growing, this is just the public launch.”

Rothrock said the new office is currently taking student suggestions on how to operate and what to include.

“I think the beauty of a new office is that it’s only limited by students’ creativity. At our first coffee and conversation, one student asked to see a panel and I already set up a meeting with her to talk about that panel,” Rothrock said.

The program was inspired by a number of alumni who believed in the importance of spirituality as a dimension of student wellness, Rothrock said. Pitt emulated similar work done by Xavier University, a Jesuit college.

Linda Williams-Moore, associate dean of students and a member of the planning committee, said while Xavier’s program inspired Pitt’s, there are differences between the two.

“We didn’t want to duplicate Xavier, but make it fit to Pitt,” she said. “We are not a religious school like Xavier University and we have a wide variety of different faiths.”

Sophie Tannenbaum, a junior anthropology and architecture student and resident assistant, said she was invited to the event by her resident director and came not knowing what to expect, but found it “right up her alley.”

“My coworkers and I talk a lot about our faiths,” she said. “We’re pretty religiously diverse.”

Tannenbaum was raised Roman Catholic like her mother but has been exploring her father’s Jewish faith more at Pitt. She works with a person who has converted to Islam since coming to college and another who identifies as nondenominational.

“College is a nice vessel for exploring faith, you get away from parents and you’re on your own and can explore different faiths and figure out what works for you spiritually,” she said.

Tannenbaum said having an office at Pitt that encourages discussion across religions will help promote tolerance and address biased or skewed perceptions of other religions.

“There’s so many benefits to this, especially in today’s society and culture, there’s so many issues that comes with talking about religion,” she said. “I hear a lot about Israel-Palestine, and … stuff like the War on Terror is based in religious intolerance.”

Wyche said he believes the office is something that Pitt, a religiously diverse school, is in need of.

“I feel right now there are lots of faiths on campus but they’re secluded from each other,” he said. “I hope this office becomes a hub for people of different religions to come together and talk.”