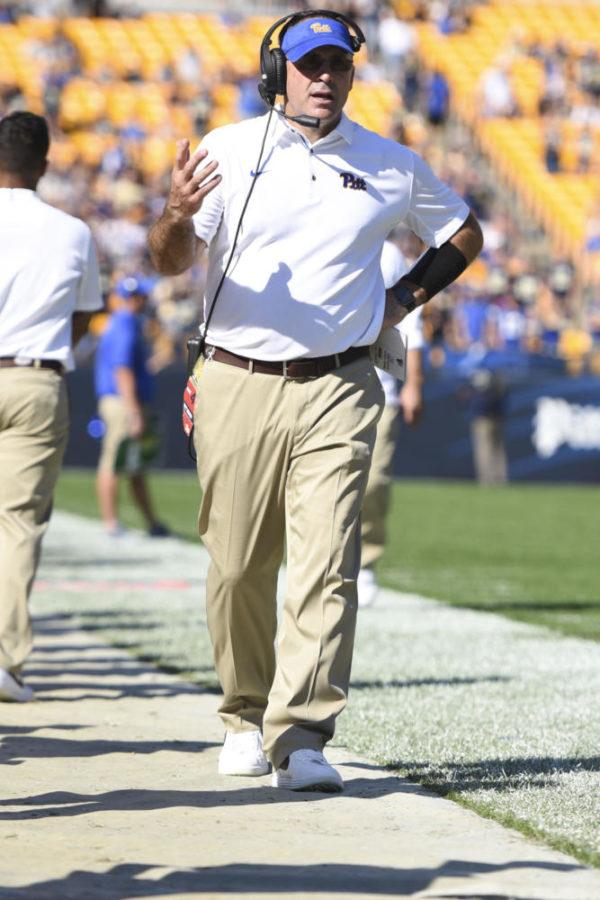 Narduzzi pulled redshirt sophomore quarterback Ben DiNucci in the third quarter of Saturday’s loss to North Carolina State. Though DiNucci was playing a solid game, Narduzzi opted to give his young quarterback, first year Kenny Pickett, some experience. Though he looked poised in his debut, Pickett failed to keep the Panthers in the game.

Things certainly went awry in the Panthers’ quarterback shuffle, but Narduzzi said in his Monday press conference he doesn’t appreciate being tested on the matter by members of the media.

“We get paid to make those decisions. You say it looked good, okay,” Narduzzi said. “If I wait two more series, you might be going, ‘Why did you wait so long to put Kenny in?’ We’re having a different conversation, so it’s easy to sit there with your arm on that armrest and say that stuff.”

He then went on to elaborate on his plan for Pickett and how talent at the quarterback position is delegated after senior Max Browne’s season ending injury.

However, Narduzzi did manage to name a starter for the matchup against Duke. Narduzzi made it clear that DiNucci is his guy, but he also said the quarterback position is no different from any other position on the field.

“Ben is our starting quarterback without a question,” Narduzzi said. “If things aren’t going good, he knows that, we know that, whether you want to hear it or not. Sometimes you have selective hearing on what you want to hear and what you don’t want to hear.”

Narduzzi attempted to put the loss against NC State in the rearview mirror but left the door open for speculation on game-planning and execution.

“We did some really good things on Saturday, both offensively and defensively,” Narduzzi said. “Didn’t stay as consistent as we’d like to be. Still haven’t played a complete game. Need to pay attention to details a little bit more than we have.”

The run game on both sides disappointed Narduzzi, but he did not believe the box score and the 248 yards given up on the ground told the whole story defensively. The defense stuck to its assignments but was still gave up some big plays.

“Look at the run game defensively,” Narduzzi said. “We did some great things … and even the run that went 83 yards, we saw that play before and afterwards, and we were successful in stopping it.”

The Panthers’ inability to run the ball inside or use some of their more versatile and speedy players to get outside led to the team’s poor ground game, Narduzzi said.

“I don’t feel like we’re running good inside or outside, how about that?” he said.

Even though Narduzzi’s focus was mostly on the details of Saturday’s performance, he did spend a moment drawing a comparison between the Blue Devils and the Panthers before hinting that the matchup could be a challenge for his team.

“Obviously they’re young at the quarterback spot as well,” Narduzzi said. “But Duke is a good football team, and when you watch it, Duke can hang with anybody.”