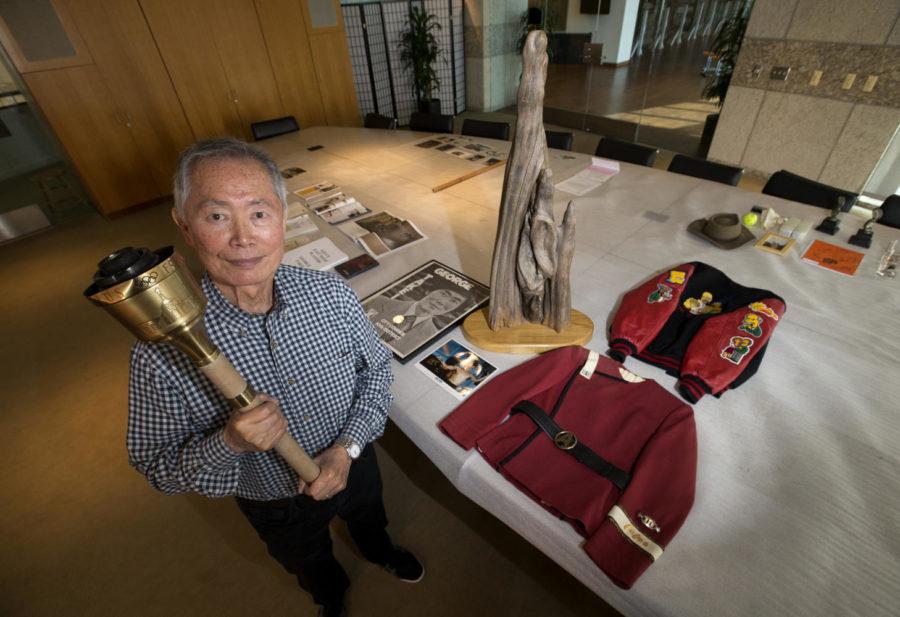 Shortly after his fifth birthday, in 1942, George Takei and his family were forced out of their home in Los Angeles at gunpoint. Along with 120,000 other Japanese Americans, Takei’s family was sent to a Japanese internment camp.

Takei and his family spent a few months in a camp on the West Coast before moving to another internment camp in the distant swamps of Arkansas. In each camp, every family was assigned to one narrow horse stall that reeked of manure. But despite the camps’ poor living conditions, all of the children still attended school.

“I could see the barbed wire outside the classroom while I was reciting ‘liberty and justice for all.’ I was too young to understand the irony of those words,” Takei said.

More than 1,000 people gathered in Soldiers and Sailors Memorial Hall Tuesday night to hear Takei’s personal story of activism and displacement — the theme of this year’s Pitt International Week.

Takei, 80, has reached international stardom for his role as Hikaru Sulu in “Star Trek,” but as a guest of Pitt’s International Week, he didn’t focus on discussing his sci-fi persona. Instead, he spent the two hours on stage speaking about his experience in Japanese internment camps in the United States after Pearl Harbor.

Lynn Kawaratani — acting associate director of Pitt’s Asian Studies Center — organized the event. She said she had personal ties to Takei’s childhood experience — her own father was held in a Japanese internment camp. Kawaratani said she admired Takei’s ability to use his fame as a platform to speak out against injustice.

“[Takei’s] not just someone who experienced it, but someone who took those experiences and felt inspired and motivated to speak out and to become an activist,” she said.

Kawaratani said she planned the event with relevant political issues in mind — particularly how recent executive orders could play a role in the 65 million displaced people worldwide.

“Now more than ever, with the current administration, we think those things will never happen again. We think American citizens are protected, but we have to be vigilant,” Kawaratani said.

Takei explained the widespread discrimination of Japanese Americans as a visceral reaction to the Pearl Harbor bombings.

At the end of the war, Takei and his family members were each given $25 and a one-way ticket to any destination in the United States. His family returned to Los Angeles where they lived on Skid Row, an area in downtown Los Angeles known for its large population of homeless people.

“We were free but we were impoverished,” he said. “They took everything from us.”

As a teenager, Takei took an interest in civics and activism after discovering the lack of attention given to the history of Japanese internment camps in the United States.

Joseph Lehman, a first-year political science major, attended the event as a fan of “Star Trek,” but said he would remember Takei’s message of activism.

“The thing that really stuck out to me is when he talked about how you’re not really practicing citizenship if you’re not doing it actively,” Lehman said.

Sophomore Olivia Newport, a marketing major, said she left with a better understanding of Japanese internment camps, and was inspired by Takei’s ability to voice his opposition.

“His encouragement to speak up and fight for what you believe in is important for college students,” she said.

Takei said he confronted his own obligation to advocate for LGBTQ+ rights in 2005 after former Governor Arnold Schwarzenegger vetoed a bill which would have allowed same-sex couples to marry. Takei said even though he and his partner, Brad, were as outraged as the young people protesting on Santa Monica Boulevard, they weren’t expressing it from the comfort of their home.

“For the first time, I spoke to the press as a gay man, and I went and blasted Arnold Schwarzenegger’s veto,” he said.

Takei credits his father as the source of his own optimism toward American democracy, a sentiment he imparted to the audience toward the end of the event.

Editor’s Note: The year that Takei’s family was sent to an internment camp was added after initial publication.