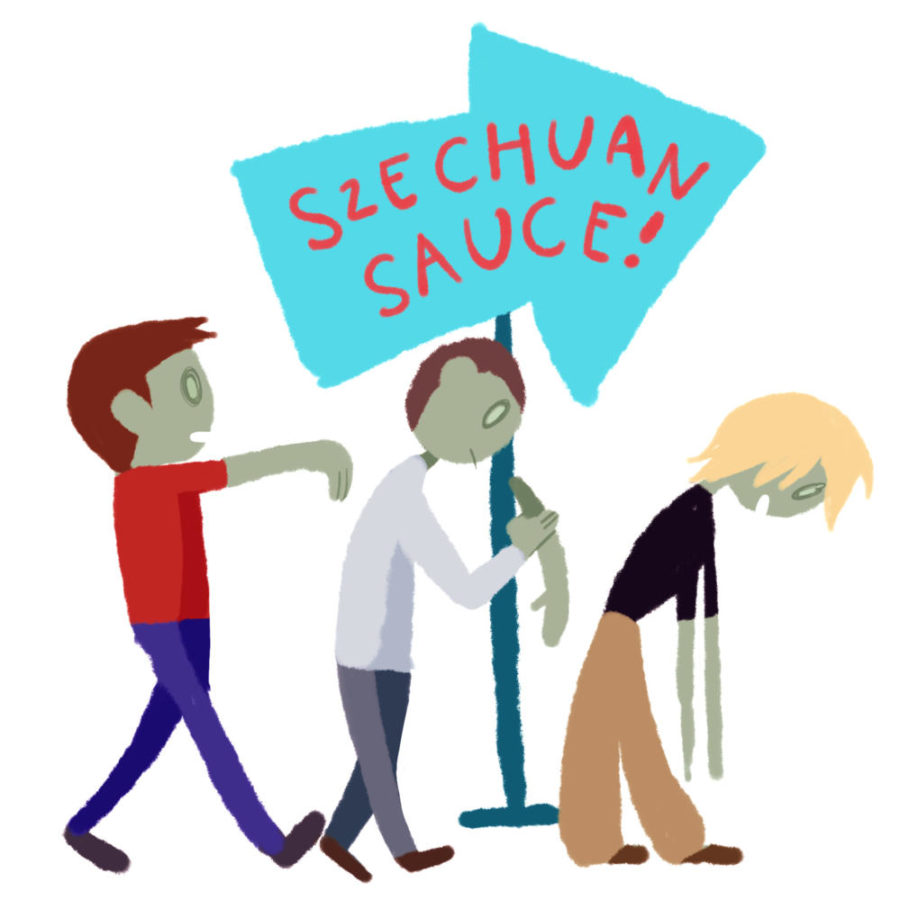 Hundreds of people stood last weekend outside a big business to protest. They raised their fists, chanted at the representatives and demanded they provide for them. What were these people so furious about? A 19-year-old sauce for McDonald’s Corp. chicken nuggets.

“Rick and Morty” made headlines with McDonald’s last week when the fast-food chain rereleased its Szechuan sauce, a promotional collaboration with Disney for the 1998 release of “Mulan.” After a few months, the promotion ended and people forgot about Szechuan sauce.

That is, until the surprise season three premiere of adult cartoon “Rick and Morty.” The show is about the intergalactic adventures of Rick, an alcoholic supergenius, and his high school-aged grandson, Morty. In the premier, Rick is trapped inside his own mind back in 1998, when McDonald’s provided the sauce. Later, Rick says he’ll do whatever it takes to get more of it, even if it takes nine more seasons.

Since that episode, “Rick and Morty” fans petitioned McDonald’s to bring back Szechuan sauce. So when McDonald’s announced they would bring back the sauce for a one-day special event at a select number of restaurants across the United States, fans were excited. But when McDonald’s was unable to supply all the fans with the sauce, the fan base went berserk.

When employees told the growing lines they had run out of Szechuan sauce, angry fans started chanting and rioting over the fiasco, all the while the employees, who were being paid minimum wage, were just trying to do their jobs. One fan even jumped on the counter, screamed “I’m Pickle Rick” and “Wubba Lubba Dub Dub” — two of Rick’s catchphrases —  and rolled around on the floor before running out of the store.

Fans like this have given the “Rick and Morty” fan base a bad reputation. Series creator Dan Harmon even acknowledged this when sexist fans harassed female writers Jane Becker and Jessica Gao on the internet that didn’t like the episodes they wrote.

“It’s offensive to me as someone who was born male and white, and still works way harder than them, that there’s some white male [fan out there] trying to further some creepy agenda by ‘protecting’ my work. I’ve made no bones about the fact that I loathe these people,” Harmon said. Couldn’t have said it better myself.

This sauce fiasco isn’t the only thing that makes the fan base so terrible. There are fans who seriously think watching “Rick and Morty” makes you smarter than other people, such as one unnamed fan who went viral after a post they wrote was copied and spread on reddit by popular user Niekish.

“To be fair, you have to have a very high IQ to understand Rick and Morty,” the user wrote in a July 29 post. “As a consequence people who dislike Rick & Morty truly ARE idiots.”

Now, it’s true that “Rick and Morty” is smartly written — The Pitt News culture editor Lexi Kennell pointed this out in an article last month.

“While ‘Rick and Morty’ exhibits traits seen in Neo-Dadaism, the show mainly wrestles with the idea of humans trying to seek their life’s purpose,” she said. “The show’s dialogue is quite possibly its most nihilistic aspect, often laden with existential realizations or breakdowns.”

But just because fans spend hours analyzing every single scene and reference doesn’t mean they are smarter than other people. In fact, other cartoons such as “Bojack Horseman” do the same thing, yet don’t have the overtly toxic fanbases that “Rick and Morty” does.

It’s unbearably arrogant for people to think watching a cartoon makes them more intelligent. A show as popular as “Rick and Morty” doesn’t require a high IQ to understand it — if it did, it’d probably be inaccessible and people wouldn’t watch it. For a channel like Adult Swim that cares about viewership numbers, that would be bad for business.

And if “Rick and Morty” fans truly had high IQs, they wouldn’t be standing outside for hours complaining that they didn’t get teriyaki sauce from a fast-food restaurant or trading their car for a single packet of the sauce like one woman in Michigan did. In retrospect, I wish I had gone to get some of that sauce so I could sell it online for thousands of dollars to pay off some student loans.

But these fans completely missed the point of the series. Despite Rick’s infinite power and intelligence, all he wants is some sauce — and he can’t even accomplish that. He pretends like nothing matters because of his ability to travel to any dimension, but in reality he is miserable. And I think deep down, despite Rick’s aggressive apathy and narcissism, he knows it.

In the end, all I want is to say is I like “Rick and Morty” without being ashamed of it.