Israelis and Palestinian find common ground in the environment 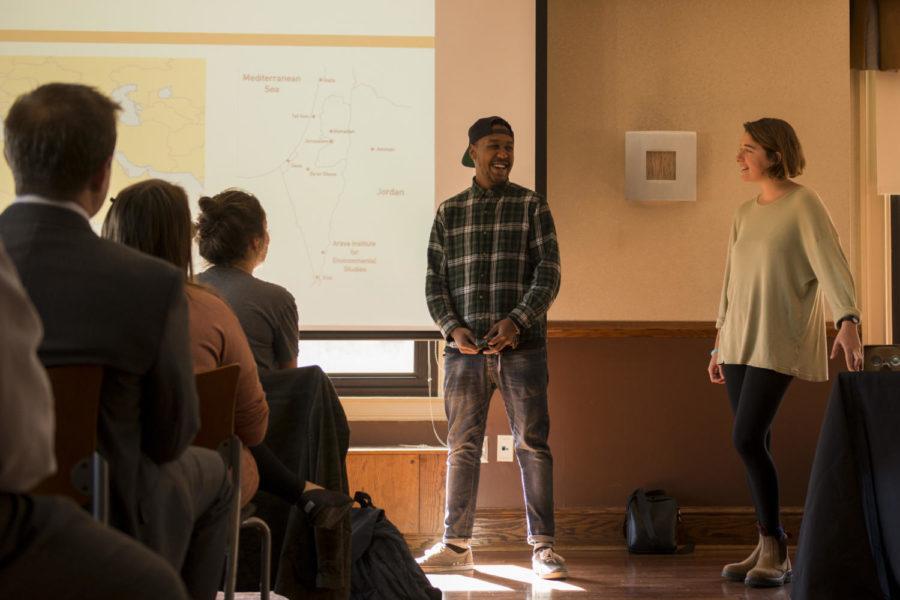 Students and faculty from the Arava Institute for Environmental Studies — a university that focuses on intercultural research and environmental work — led a discussion, called Crossing Borders: Environmental Cooperation in Israel and Palestine, in the William Pitt Union Thursday as part of Pitt’s International Week.

Ari Massefski, the Arava Institute University relations manager, introduced the discussion and said the school has enrolled students from more than 45 countries. About a third of the students have Jewish or Israeli backgrounds, another third come from Arab countries and the remaining third are students from outside the region — from places such as America and Europe.

Shadi Shiha, a 25-year-old 2014 graduate who studied autotronic engineering, was among the Arab third of students to come to the university. He said cooperating to solve environmental issues is a cause that can link Palestine and Israel.

The state of Israel was created at the end of World War II. Palestinians are the Arab population who occupied the land before Israel’s creation. Though there have been numerous peace attempts, the two sides are in conflict over who controls the land.

Shiha is a refugee from Jordan — Shiha’s father fled from Palestine to Kuwait in 1948 and his mother did the same in 1967. His mother and father met in Kuwait and migrated again to Jordan as refugees during the Persian Gulf War in 1991.

Shiha interest in environmental work evolved at the Arava Institute through his involvement in environmental events in Jordan — he worked on green roofing, recycling and upcycling. At Arava, Shiha and other students work on research involving water conservation, renewable energy and sustainable agriculture, Massefski said.

Shiha spoke about a project he worked on to conserve water. Shiha said because Jordanians love to wash their cars, he helped create a thin wax top layer for cars to keep off dirt, oil, water and other particles to reduce the amount of water wasted from frequent car washing.

“It made me feel like I had a responsibility to help Jordan,” Shiha said.

A former Arava student who also attended the discussion, Eve Tendler, is a 23-year-old Middle Eastern studies and geography student at Ben-Gurion University of the Negev. She was born and raised in Tel Aviv, Israel, where her family, who were Holocaust survivors, settled in the late 1970s. Like Shiha, she believes that environment is one thing that can make a strong connection between Israel and Palestine.

“Environment is … something that almost each person can relate to when you talk about food and water,” Tendler said.

Environment isn’t the only thing that has the power to bring people together, she said. It’s easier for people to talk about things that are strong parts of their identities — such as a mutual love of football. It’s more important to make personal connections than to make formal and political connections to mend the conflict, she said.

“I do think that any type of interest can bring people together,” Tendler said. “I think religion can be something that’s very interesting to look into, between Muslims and Jewish, especially because there is so much in common between the two religions.”

Annie Linden, a 24-year-old research intern at Arava, graduated from Bard College in 2016. As someone with a Jewish background, Linden welcomed the opportunity to work on solutions to the conflict.

“It was a unique opportunity … to live with both Israeli and Palestinians and people from all different types of backgrounds,” Linden said.

She said that especially the people living in Palestine, Israel and Jordan, who are in a desert climate, need to be aware of their access to water because in the future they may face a lack of clean water if they do not take action to become more environmentally friendly.

“People that have these geographic specific borders, they come in one room together and they realize they have similar environmental problems,” Linden said.

Tendler said when she was young she was given one-sided information about the ongoing Israeli-Palestinian conflict in school. One day she was watching the television and saw bombs being dropped in Gaza — a self-governing Palestinian area of land located between Israel and the Mediterranean Sea. That’s when Tendler became interested and started asking questions about the conflict.

“The media is showing a war zone, which can make people forget that it’s actually humans that are living their lives there, and raising their children in this reality,” Tendler said.

It took Shiha four months to convince his parents to let him go to university at the Arava Institute because it is located in Israel. Growing up around Palestinian culture, he said all he knew about Israel was that there was a lot of military activity. So, when he crossed the border, he was expecting to be shot at.

“As my mom said, [Israelis] will put you in a bagel and eat you,” Shiha said.

Shiha instead discovered a country with students like him who had different views but were open to listening to one another. Shiha said he wishes people would become more educated about the struggles that people are going through in Palestine.

“Let’s say we talk to a million people, maybe one or two of these million people some day will be decision makers and will do something actual about this conflict to solve it,” Shiha said. “Hopefully one day someone will do a change, any change, about it.”