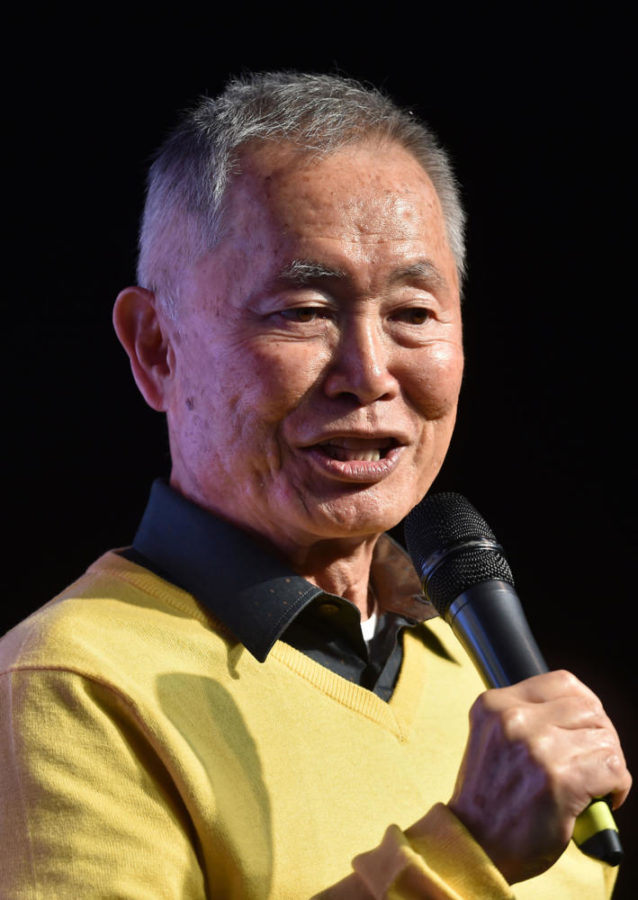 By Alexis Buncich | For The Pitt News

George Takei, actor and activist, has seen a lot of discrimination in his life. At 80 years old, he has lived through a Japanese internment camp, the LGBTQ+ civil rights movement and countless other protests. He may be originally known for his role in “Star Trek,” but he’s used his fame to become a world-renowned political and social activist.

And when he came to Pitt Oct. 18 for a speech at the Soldiers and Sailors Memorial Hall and Museum, he seemed proud in the face of these struggles. He reminded the audience they themselves should seek the change they desire, rather than blame the individuals who make the final orders.

In our new political reality, it sometimes seems like our calls for change go completely unanswered — which is why Takei might be onto something. When asked about the root of any problem, those disappointed with America today have a tendency to simply say, “Trump.” But President Donald Trump is not the single crack in a flawless structure. We all need to make like Takei and stand up for our own beliefs, rather than merely criticizing a single person at the top.

Of course, this mindset seems tough to achieve for anyone — but for Takei especially, it seems miraculous. When Takei was just five years old, former President Roosevelt signed a 1942 executive order relocating anybody of Japanese ancestry to internment camps. He told the crowd a story about reciting the Pledge of Allegiance while in an internment camp elementary school, but was too young to understand the irony in his words.

In response to his experience in the camps, he developed an avid interest in civics and political engagement. He began voraciously reading, learning everything he could about the political system — presumably so that if the tide swelled toward injustice again he would have the tools to fight against it.

And Takei eventually had his chance. As an actor in the popular TV series “Star Trek,” he had a fan base and audience he could potentially use for political reasons. When then-California Governor Arnold Schwarzenegger vetoed an already-passed 2005 marriage equality bill, Takei felt compelled to publicly embrace his sexuality and use his platform to promote LGBTQ+ rights.

In his speech he told gripping stories of difficult times like these — but what surprised me most was his refusal to blame any one individual for the injustices he encountered. Throughout the evening, Takei reinforced the idea that each leader is only human, and every human has fallacies.

“Ours is a people’s democracy made up of fallible people,” he said. “Fallible people who have potential to do great things.”

But our current president often seems hell-bent on doing exactly the opposite. So instead of attempting to single-handedly change the mind of the president, we need to take smaller steps first. Local politicians are much more accessible, and it is entirely possible for an ordinary civilian to get a one-on-one appointment with one. By spreading grassroots movements, the voice of the people will work its way up to the Oval Office. Rather than build a wall against the higher-ups who make policy adjustments we don’t like, we need to build a bridge encouraging them to consider our opinions.

Across our country it’s easy to find information to start individual political action — take Pennsylvania, for example. The Pennsylvania General Assembly website makes it easy to contact your local politicians, and has a comprehensive list of every Allegheny County legislator. This list includes the names, websites, biographies and contact information of each representatives.

For those whose hometowns are elsewhere in Pennsylvania, there is an easy Find Your Legislator tool available, and across the nation, most states have similar tools available.

For Pitt students, there are several organizations dedicated to getting students involved in politics — Pitt reports there are at least 65 distinct political student groups on campus. If you’ve always wanted to be involved in activism but never knew where to start, there’s probably a group already on campus for you.

But that’s the key part — for you. Everybody’s style of activism is different and effective in different ways. Takei wasn’t telling us to stop holding our leadership accountable. He was trying to remind us that even if everything goes right and our favorite politicians get elected, they are still fallible and liable to make mistakes.

So let’s stop engaging in politics of accusation and instead pursue politics of policies. Pick issues that are engaging to you and that you could provide unique commentary on, or topics you feel particularly passionate about it — regardless of your reasoning for wanting to get involved, take Takei’s advice. Start small, and see the power of grassroots activist organizations, political clubs on campus or weekly debate meetings.

And perhaps this new viewpoint will give you some peace of mind if you’re frustrated with the political system today. At the very least, it’ll give you a way to express your anger other than ranting on your Facebook timeline.