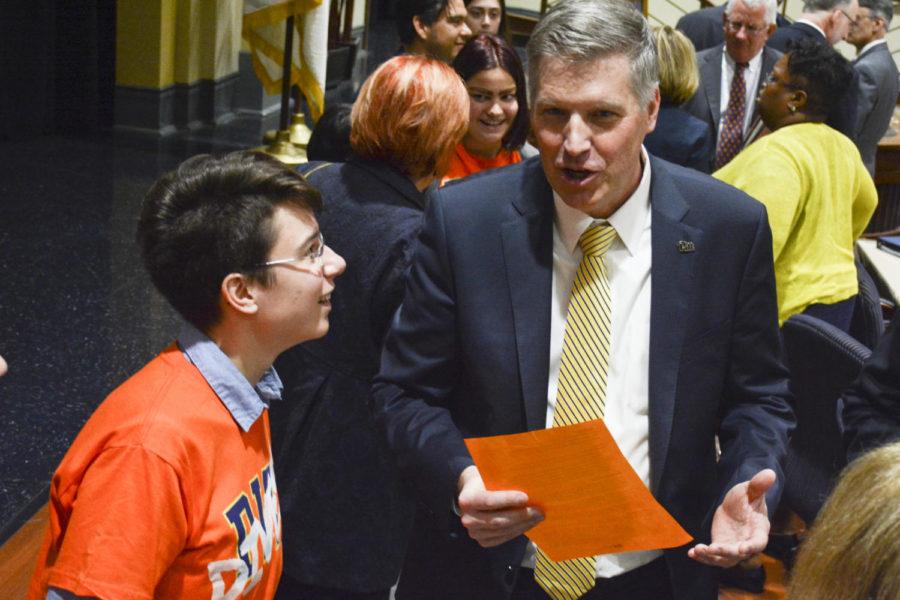 At the Fall Sustainability Fair this October, Mayor Bill Peduto signed our petition demanding the University of Pittsburgh divest its holdings from fossil fuel companies, expressing his support as an alumnus and as the mayor of our city. This is consistent with his commitment to divest the City of Pittsburgh from fossil fuels by 2030 as laid out in his Climate Action Plan 3.0. The mayor has expressed great enthusiasm regarding the Pittsburgh’s future as a leader in sustainable infrastructure.

As one of the City’s largest institutions, the University needs to not only make a verbal statement in support of divestment, but also commit to divesting. Pittsburgh is moving toward a sustainable future and we do not want Pitt to be left behind.

The Fossil Free Pitt Coalition is a group of students, faculty and community members who demand Pitt divest from fossil fuels. We finally got our first big win with the administration this month. The Faculty Assembly passed a resolution leading to the creation of a Socially Responsible Investing committee that would ensure students, faculty and staff have input on the University’s investments, rather than just the Board of Trustees. This is the fourth ask on the divestment petition, and the progress made is because students are demanding it. The same resolution calls the effects of climate change “catastrophic.”

While we appreciate these first steps taken by the University and are excited to see what the committee will look like moving forward, the University cannot stop here.

As the resolution acknowledges, climate change is indeed “catastrophic.” The cost of climate change grows more evident by the day. Rising sea levels worsen the scale of natural disasters like Hurricane Harvey — an MIT study predicts high intensity hurricanes will only become more common in our future.

Divestment isn’t just about melting ice caps or dying polar bears. It’s a movement to stop industries from creating irreversible damage to people and communities for the sake of a profit margin. The United Nations Refugee Agency has initiatives specifically for “climate refugees,” or people who are displaced by climate issues. With educational institutions investing in fossil fuels that add to the problem by ruining air and water quality, setting a precedent of transparency is more important than ever. In signing our petition, Peduto showed he is taking steps to put people over profit. We are asking you, Chancellor Gallagher, to do the same.

So far, with the creation of the SRI Committee, the Fossil Free Pitt Coalition has achieved only one of four initial asks, which are:

Immediately freeze all new endowment investments on Carbon Underground Top 200’s list of the top 100 coal companies and top 100 oil and natural gas companies according to the size of their fossil fuel reserves.
Divest the endowment’s direct holding in the Top 200 within three years.
Divest and screen our endowment’s direct holdings and commingled funds from the entire fossil fuel industry within five years.
Institutionalize a collaborative process between students, faculty, the administration and the investment committee to address future divestment proposals and work to make sure the endowment is invested in a socially and economically responsible manner.

We are closely observing the University and will continue to demand the rest of our asks be met in a timely manner. Considering the catastrophic pace of climate change and its consequences, which will be borne for many generations, we cannot afford to move at the bureaucratic speed that is traditional of institutions such as the University of Pittsburgh.

As a member of the executive committee of the Board of Trustees, you, Chancellor Gallagher, have a tremendous influence on the decisions agreed upon by the board. As the chancellor for the University of Pittsburgh, you represent more than 28,000 members of the Pittsburgh community. We have more than 5,000 signatures from students, faculty, staff and alumni and 49 SORC-recognized clubs signed on as coalition members. This is your chance to use your position and prove to the Pitt community that you truly represent the student body. The mayor of Pittsburgh has spoken, the Pitt student body has spoken and all eyes are on you.

Chancellor Gallagher, it is time for you to make a statement of support for the divestment of fossil fuels for the University of Pittsburgh. Regardless of the views of the board, the University has spoken. We demand that you admit that climate change is real, that fossil fuels are a huge contributing factor and that divestment is a feasible means of tackling the problem, thus proving Pitt cares about the future of their students and the rest of the communities that will be affected.

Your claim that you cannot lobby against your own board is a cop-out. We ask that you demand they treat climate change as the pressing issue we all know it is.

Collective power will mobilize and cause change when institutions cannot alone, but we want Pitt to be an institutional leader in this battle. In the spirit of “Veritas et Virtus,” this is an opportune juncture to lead by example and not to skulk in the shadows.