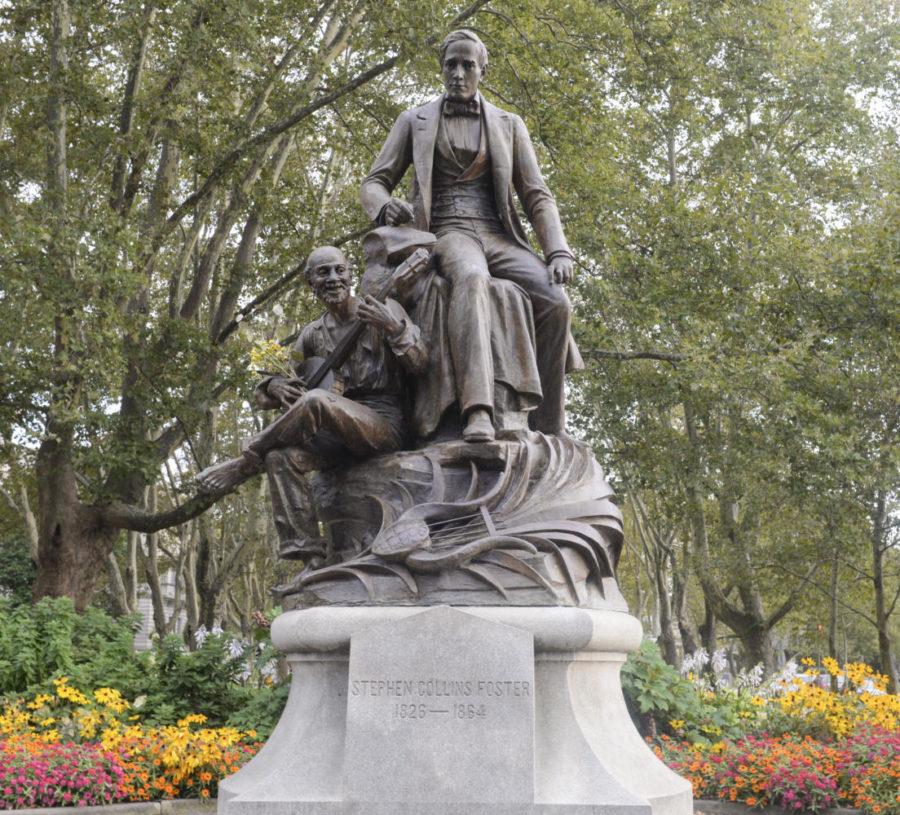 Dippy the Dinosaur might be losing a pal in the near future.

The Pittsburgh Art Commission reached a unanimous decision Wednesday to recommend the removal of the Stephen Foster statue — located on Forbes Avenue next the Carnegie Museum of Natural History’s diplodocus dinosaur statue. Sarika Goulatia, a member of the art commission, said the issue now falls to the Office of Public Art, which will consider the logistical and financial groundwork behind the recommendation before reconvening with the commission in about three months.

The Art Commission hopes the statue will be removed within six months, though this is dependant on several factors, including securing a venue to relocate the statue. The commission recommended the new location be private — some online suggestions included the Heinz History Center, the Stephen Foster Memorial and the Carnegie Museum — as opposed to its current public placement.

“As public art commissioners, it is our job to make sure that no public work of art is offensive or painful to any community, and that was a main reason for its removal,” Goulatia said.

The Stephen Foster statue depicts Foster standing, tall and luxuriously dressed, with a black man sitting at his feet. The black man is toothless, wearing tattered clothing and strumming a banjo while Stephen Foster transcribes one of his iconic songs — “Uncle Ned,” a song about a slave.

While Stephen Foster’s contributions to American music are celebrated and honored by the Stephen Foster archives — located at the University of Pittsburgh — two public meetings this month encouraged community members to voice their opinions on the statue. These meetings showcased the hurtful message of black subjugation the statue harbors for some people.

Those who spoke against the statue were primarily African-American, Goulatia said, but also included a variety of professors and community members of all races who found the statue offensive — an argument Goulatia agrees with.

“I really feel that the African-American community should not have to bear the burden of the pain that the statue causes on a daily basis for them when they have to cross it,” Goulatia said.

As an artist herself, Goulatia said she thinks the statue should be studied in a museum for its aesthetic and historical value — but that a public setting is not the proper context for this.

“We need to represent the right intent for any piece of public art, it cannot be something which makes a statement and endorses and celebrates white supremacy,” she said. “I think our removing it, we really stand on the right side of history.”

Although Laurence Glasco, a history professor at Pitt and an African-American, understands the commission’s decision and the reasons behind it, he said he would prefer the statue remain in a public space because it forces people to confront history and its complexities.

“I think it’s a great learning opportunity we’ve lost,” Glasco said. “I don’t know how many people are going to make a trip to the Carnegie Museum or the Stephen Foster Memorial auditorium to see the statue and read up on it.”

Glasco said the Stephen Foster statue is different from other controversial statues such as those that depict confederate soldiers — which Glasco said are truly offensive. He said Foster was not the type of person to be interested in white supremacy and did not consciously denigrate black people. Even Frederick Douglass, a black abolitionist and former slave, admired Stephen Foster, Glasco said.

“In some ways I think we’re losing sight of that, the historical context of a person and his time. That somebody who’s progressive for those times today looks regressive,” he said. “And so we’re sort of judging him by our standards of today.”

Glasco uses the statue as a teaching tool in his History of Black Pittsburgh class. He said this year when he took his class, the statue generated good conversations and discussions. As part of the class, students even voted on whether or not the statue should be removed.

“They all wanted it gone,” Glasco said, laughing. “So I knew Foster was toast at that point.”

While Glasco would have preferred a different verdict, he said the art commission’s attention to public input was a good thing. Deane Root, a music professor at Pitt and a curator for the Stephen Foster collection, agreed, describing the process the commission used as a fair and open one.

“I’m glad that the City has deeply engaged in listening to the citizens and has heard [their input],” Root said. “They have responded, I think, to the expressions of pain, anguish, anger and the hurt that members of the public express about the message that they read in that statue.”

Root commended Pitt students for their role in catalyzing the review process for the statue by voicing their concerns.

“Hats off to them for speaking up, speaking out and starting the ball rolling on something that I think has a really productive outcome in terms of the issues that they raised at the outset,” Root said.