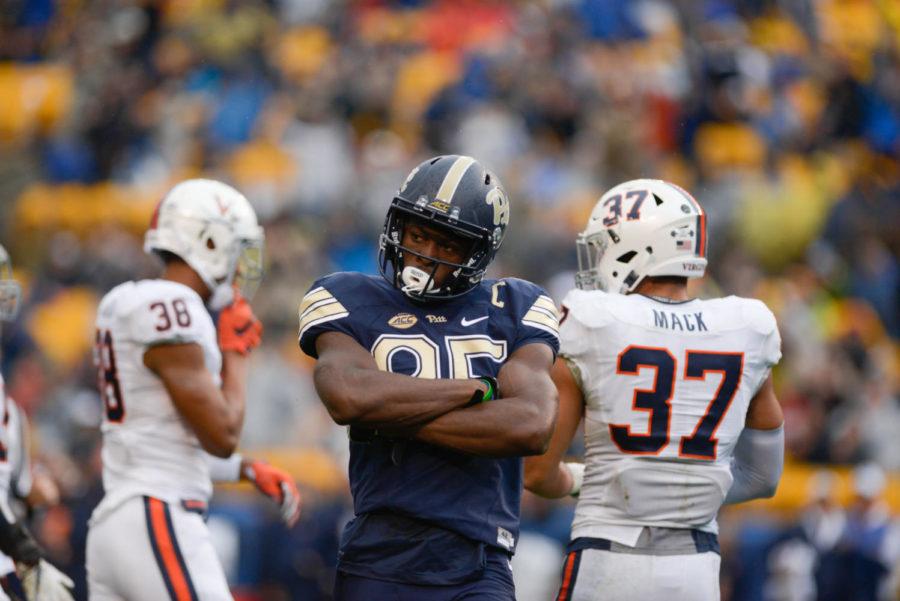 The Cavaliers lined up at the Panthers’ 1-yard line, prepared to close their deficit, but the Pitt defense held steady, effectively eradicating Virginia’s chance of winning. The Panthers stood victorious when the game ended, 31-14.

“We focused on two major things today, running the ball and stopping the run,” head coach Pat Narduzzi said. “I felt that we did that today.”

The Panthers received the ball to start the game, but failed to accomplish anything on the first drive. Their quick three-and-out gave possession to the Cavaliers.

With a combination of pass and run plays, Virginia moved from its own 36 to Pitt’s 38. Redshirt sophomore linebacker Saleem Brightwell foiled Virginia’s play, though, when he intercepted senior quarterback Kurt Benkert’s pass after tipping the ball to himself. Brightwell returned the ball for 16 yards to the Pitt 49.

“[Time] was going slow when I tipped it,” Brightwell said. “Then I got it and I just started running.”

Pitt took advantage of the good field position as redshirt sophomore quarterback Ben DiNucci led the Panthers on a 51-yard drive. Junior running back Darrin Hall ended the drive with a 14-yard touchdown rush with 8:25 remaining in the first quarter. 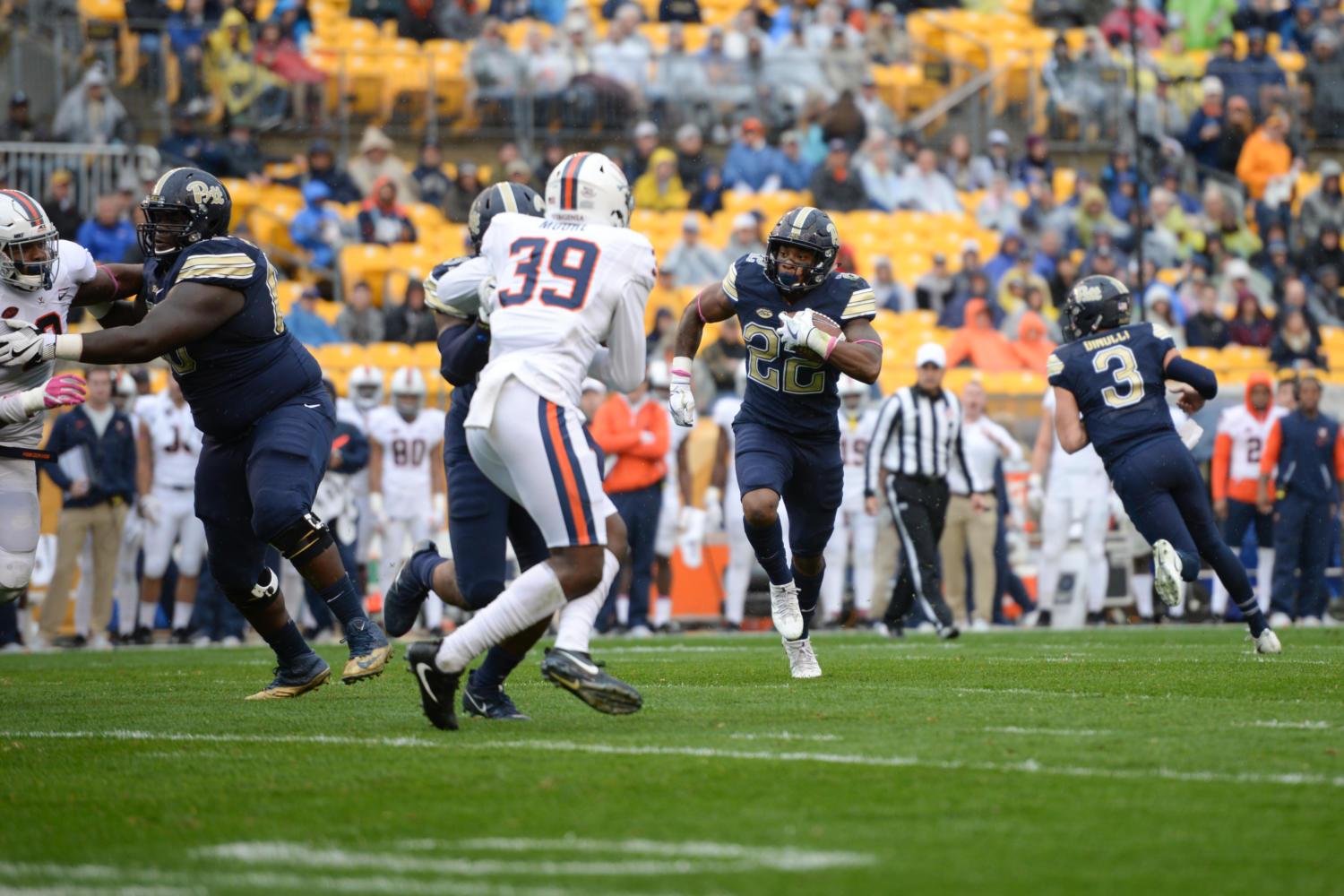 “As the game went on, I was able to recognize what the defense was going to do,” Hall said. “The game is a lot slower now for me.”

The Panthers nearly let Virginia back into the game when they gave up a 69-yard kickoff return to sophomore wide receiver Joe Reed. When Pitt forced a Virginia three-and-out, the Cavaliers opted for a field goal but missed, keeping the score 7-0 with 6:47 remaining in the quarter.

After an impressive defensive performance, Pitt took over on downs. Following some tough running from Hall and redshirt junior running back Qadree Ollison, DiNucci connected with sophomore wide receiver Maurice Ffrench to put the Panthers deep in Virginia territory.

Hall stepped up his running game and picked up a crucial third down to put Pitt at Virginia’s 22-yard line. DiNucci completed a pass to redshirt senior Jester Weah, who broke two tackles for a 19-yard touchdown pass, making the game 14-0.

Following a quick three-and-out, the Cavaliers decided to punt to junior wide receiver Quadree Henderson. Virginia’s decision proved to be the wrong choice, as Henderson sprinted down the right sideline for a 75-yard punt return touchdown to put the Panthers up 21-0 with 6:14 in the half. 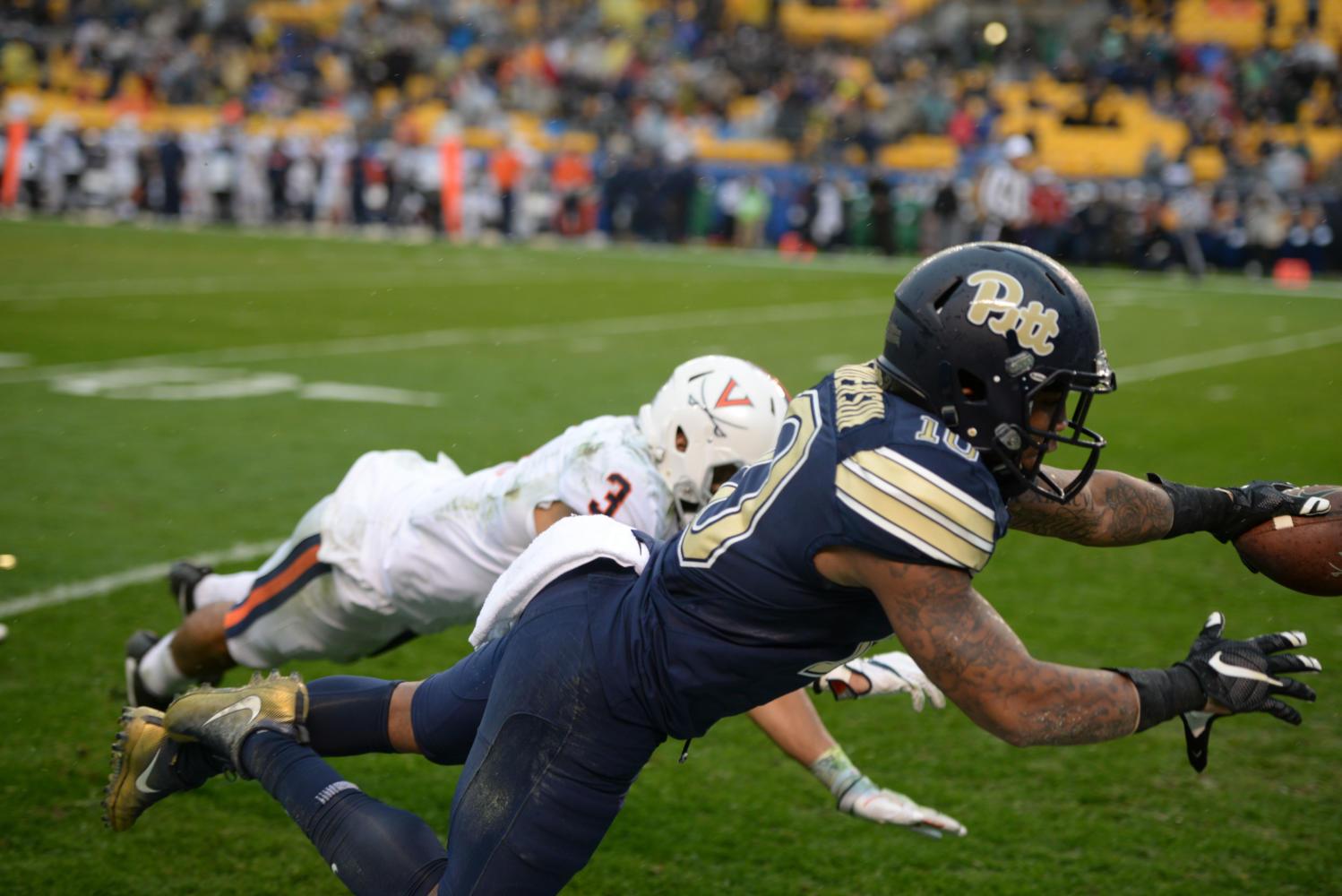 Quadree Henderson dives into the endzone with the ball. (Photo by Thomas Yang | Senior Staff Photographer)Virginia nearly capitalized following Henderson’s touchdown when Kurt Benkert connected with junior halfback Olamide Zaccheaus for a 33-yard gain, putting the Hoos in Pitt territory. But the Panthers’ defense held firm again, forcing the Cavaliers to another turnover on downs.

Benkert threw to senior wide receiver Andre Levrone in the end zone on fourth down, but redshirt sophomore defensive back Dane Jackson broke up the pass and saved a touchdown.

Pitt’s defense didn’t hold for the entire half, though, giving up a 71-yard drive in the span of 90 seconds late in the second quarter. After moving into Pitt’s red zone, Benkert threw a 19-yard touchdown pass to sophomore wide receiver Hasise Dubois, making the game 21-7 with 1:13 remaining in the quarter.

The Panthers closed the quarter with the ball and ended the half holding onto their 21-7 lead.

After Pitt stopped Virginia on its first drive, the Panthers’ ground game exploded. Pitt picked up four of the five first downs on the drive, and Ollison capped off the Panthers’ play with 7:15 left in the third quarter by rushing for a 25-yard touchdown, 28-7.

Pitt gave up one first down by a penalty on Virginia’s next drive. Consecutive sacks by redshirt junior Shane Roy and redshirt freshman Rashad Weaver caused the Cavaliers’ drive to stall and forced them to punt.

DiNucci put the defense at a disadvantage by throwing an interception on the following drive. Virginia took over at Pitt’s 42 and used its running game to progress downfield before facing a fourth-and-1 at Pitt’s 2.

Virginia head coach Bronco Mendenhall decided to go for it and the risk paid off. Benkert rolled left and found sophomore tight end Richard Burney in the end zone to make the game 28-14 with 14:54 remaining in the game.

Virginia tried a surprise onside kick, but senior tight end Matt Flanagan recovered the kick, and the Panthers took over at their own 40-yard line. After Henderson moved Pitt down the field, the Panthers’ drive stalled out due to a holding penalty by Weah. Pitt settled for the field goal, increasing its lead to 31-14.

Virginia marched 74 yards down the field and tried to punch in a touchdown twice from Pitt’s 1-yard line. Both times, the Panther defense denied the Cavaliers a touchdown. The Panthers forced Virginia to turn the ball over on downs for the third time in the game. 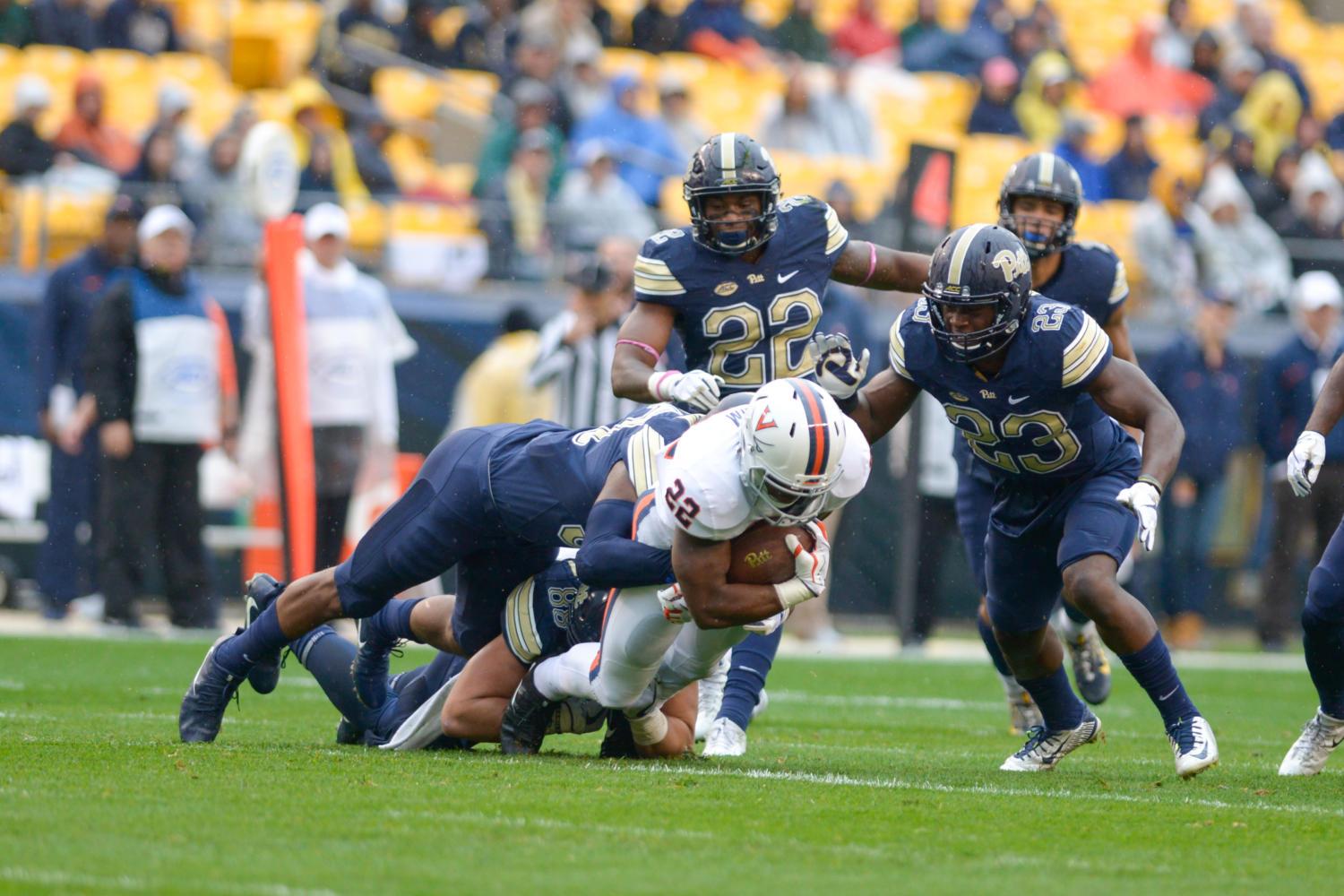 Pitt couldn’t get out of its own end zone and was forced to punt. Redshirt senior Ryan Winslow had his punt partially blocked, and the Cavaliers took over at Pitt’s 38-yard line with 2:54 remaining in the game.

“You go through adversity during the season, and things don’t go your way early,” Narduzzi said. “But our kids have hung in there and been resilient. I couldn’t be more proud of those guys.”

The Panthers have a bye week, but return to Heinz Field Thursday, Nov. 9, for a 7:30 night game against the North Carolina Tarheels.