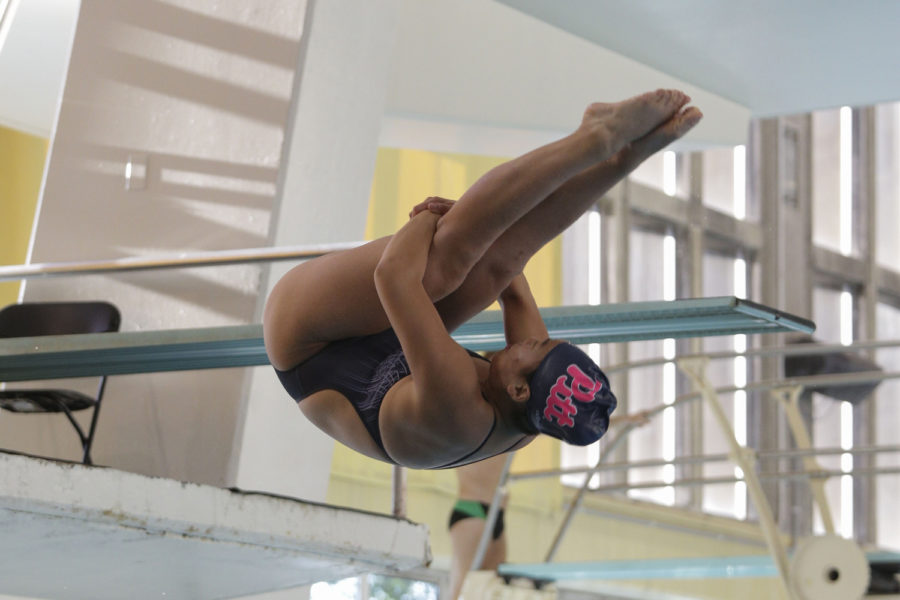 This weekend was cold and rainy in Pittsburgh, but it didn’t stop the Panthers from taking to the field, pitch and pool in heated competition.

While football conquered their second ACC team in a row, and swimming and diving made waves, men’s soccer faltered and cross country didn’t quite lead the pack.

The Pitt men’s soccer team (8-9, 2-6 ACC) struggled Friday night as they hosted Virginia Tech (9-8, 3-5 ACC) for their last home game of the regular season. The Panthers were unable to convert on any chances, resulting in a shutout to the tune of 3-0.

Virginia Tech rolled the ball in early, as senior forward Marcelo Acuna scored during the 22nd minute — the only goal of the half — and established a lead it would keep throughout the match.

The Panthers came out to start the second half down by one goal, but the Hokies struck them down after two consecutive goals during the 60th and 63rd minutes by Acuna and sophomore forward Brendan Moyers, respectively.

The Panthers offense was no match for the Hokies, with only 10 shots total, four on goal.

The Panthers will will travel to South Bend this Wednesday as they being postseason play in the first round of the ACC Men’s Soccer Tournament. The No. 10 seed Panthers will take on the No. 7 seed Notre Dame Fighting Irish. Kickoff is at 7 p.m.

This trip will mark the second Pitt has taken to the tournament since joining the ACC in 2013.

The Pitt swimming and diving teams glided past Miami, Michigan State and James Madison this past weekend during the Pink the Pool meet at Trees Pool.

On the swimming side, the Pitt men (2-2, 0-2 ACC) battled against the Michigan State Spartans, claiming 12 victories.

“It was good to see our kids compete and win a lot of races today,” Pitt head coach John Hargis said. “I thought they adapted very well.”

Pitt diving also fared well in the competition, with senior Meme Sharp and sophomore Joe Ference placing for the Panthers.

“We took a step in the right direction tonight,” Pitt diving coach Katie Hazelton said. “When there was a dive that didn’t go how we hoped, we were able to react positively and make the next dive successful, which was tremendous to see.”

The Panthers take the road this weekend, traveling to New Jersey to take on the Rutgers, Seton Hall, Georgetown and Villanova in a two-day meet.

The Panthers cross country team took to the road this past weekend, traveling to Louisville to compete in the ACC Championships at E.P. “Tom” Sawyer State Park.
The men and women both finished in 10th place out of the 15 competing teams.

The Panthers will take the road next week to Bethlehem, to complete in the NCAA Mid-Atlantic Regional.

The Panthers battled the Cardinals in five close sets.

During the first set, Pitt stuck to Louisville but were unable to grab the win with a score of 25-23. The Panthers spent the set playing catch-up but were able surpass the Cardinals by 10 points, with a score of 14. However, Louisville came back and regained the lead.

In set twp, Pitt claiming the win with a score of 25-15. The Cardinals held the Panthers at a close match during the start of the set, but the Panthers were able to surpass, gaining the lead.

The Cardinals breezed by the Panthers in the third set with a score of 25-18, claiming the win.

But the Panthers tied the match 2-2 after winning the fourth set with a score of 25-19. The Panthers took advantage of errors from the Cardinals, which granted them an early lead.

Pitt was unable to continue its luck, though, ultimately falling to the Cardinals during the fifth set with a score of 15-12. The Panthers held an early lead with a score of 5-2, but were unable to maintain it, losing overall.

The Panthers were able to turn their luck around Sunday, though, as they continued their road trip to South Bend to take on Notre Dame. The Panthers (17-6, 10-2 ACC) swept the Fighting Irish (16-7, 6-6 ACC) in all three sets.

During the first set, Pitt dominated Notre Dame, earning the win on the first set 25-16. The Fighting Irish were close to the Panthers halfway through the set, but their success was short-lived as the Panthers pulled away.

Pitt continued their lead against Notre Dame, taking another win in the second set with a score of 25-16. The Panthers ended the set with a hitting percentage of .370, and an impressive 15 kills compared to Notre Dame’s 10.

Despite falling behind the Fighting Irish by seven points in the third set, the Panthers regained control and took the win, 25-21, ultimately sealing their 3-0 victory.

The team as a whole also finished the day with 44 kills to Notre Dame’s 27, and a hitting percentage double that of the Irish.

The Panthers return home this weekend to battle two ACC teams. They will face Miami on Friday at 7 p.m. and Florida State on Sunday at 1 p.m. at the Fitzgerald Field House.

The Cavaliers lined up at the Panthers’ 1-yard line, prepared to close their deficit, but the Pitt defense held steady, effectively eradicating Virginia’s chance of winning. The Panthers stood victorious when the game ended, 31-14.

“We focused on two major things today, running the ball and stopping the run,” head coach Pat Narduzzi said. “I felt that we did that today.”

The Panthers (4-5 overall, 2-3 ACC) entered their Saturday matchup with Virginia (5-3 overall, 2-2 ACC) fresh off their defeat of the Duke Blue Devils.