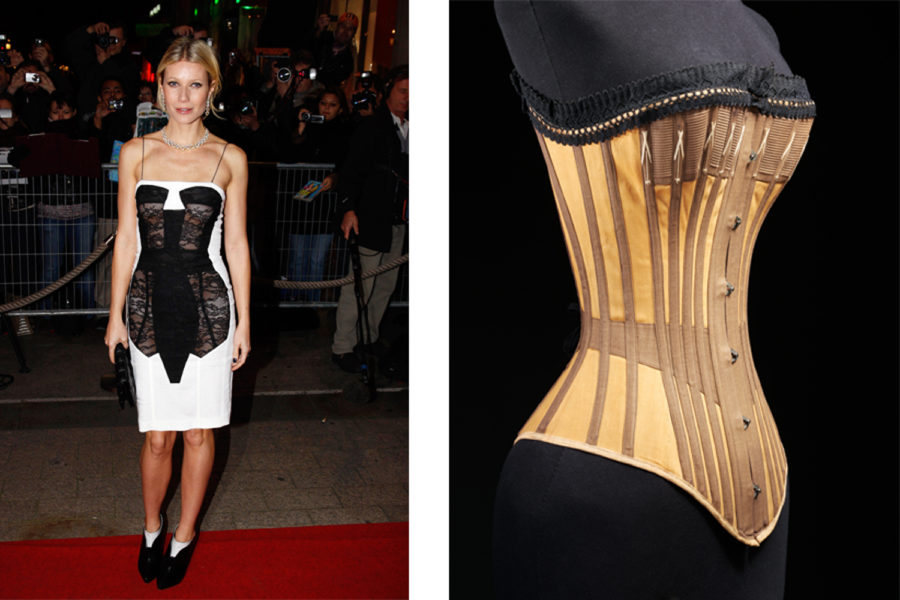 Jessie B. Ramey showed more than 170 strangers a picture of herself in her underwear Thursday at the Frick, a Pittsburgh art museum in Point Breeze.

“Don’t get too excited, this is me at the age of nine in my Underoos,” Ramey told the crowd — plus a Facebook live audience of more than 1,300 people — during her noon lecture “Underwear, Gender & the Body.”

Director of the Chatham University Women’s Institute and gender and women’s studies associate professor at Chatham, Ramey gave the hour-long lecture in conjunction with the museum’s new exhibit, “Undressed: A History of Fashion in Underwear.” The Frick is the only North American venue to host the exhibit, organized by London’s Victoria and Albert museum. The exhibit reflects the evolution of men’s and women’s underwear from the 18th century to present with a gallery of more than 200 objects.

During Thursday’s lecture —  part of the Frick’s “Art at Noon” series — Ramey shared photographs of pieces on display at the Frick and other museums and galleries. An image of a particular tightened corset — one of the most controversial undergarments throughout history, according to Ramey — elicited a collective gasp from audience members. But Ramey explained that the extremely tight-laced corsets worn in the 19th century were not actually very common.

Ramey shared other trivia about open-crotched drawers — from how they were considered modest in the mid-1800s because they added a layer beneath women’s petticoats, to women’s methods of managing their periods while wearing the garment. Audience member Jessica Marcrum, a Pitt second-year master’s student in social work, was suprised by some of these facts.

“I was surprised to learn that crotchless undergarments were originally thought to be the modest option, and how that changed through generations,” Marcrum said.

Women’s undergarments undergo makeovers nearly every decade as popular styles evolve — from the chest-flattening bras of the early 20th century to Madonna’s iconic cone bra to the Wonderbra of the 90s. But men’s garments are relatively unchanging, Ramey said.

Women can now buy sports bras with the ability to monitor their heart rates and send them texts, but Ramey said a man’s range of expression through his undergarments is still mostly limited to various styles of boxers and comedic innovations like flatulence-filtering underwear.

Kevin Sampson, of Lawrenceville, found a way to express himself at the lecture, however, by donning a Utilikilt — an American-made kilt with pockets and removable compartments for functionality.

During an audience Q&A, the Scottish-Irish American spoke about kilt-wearing men facing unwanted physical contact from women. He said it is important to bring attention to male-oriented issues of gender and the body.

“Women have been abused for a very long time, but men in kilts? There’s so many pictures of the [Queen of England] sitting there and a man beside her in regimental uniform being exposed, front or back,” Sampson said. “It’s very normal for them, but in America it’s not.”

Other undergarments, such as bloomers, have garnered political and racial reputations. During the cycling craze of the early 20th century, women required more mobility from their underwear but were expected to wear body-shaping articles that emphasized their wealth and power.

But new trends in dressing down often take inspiration from existing styles, Ramey said, citing the women’s bustle — which poofs out the back of a woman’s skirt — as a recurring silhouette in contemporary styles, such as Kim Kardashian’s bottom-lifting underwear. The most timeless thing about the underwear industry might be the way it shapes — and regulates — our bodies, according to Ramey.

“We’re living in this culture where now it’s perfectly acceptable, even desirable, to reveal those undergarments that you’ve got on, yet when underwear is being worn as an undergarment you’re not supposed to see it,” Ramey said.

She touched on how this issue affects school-aged girls — who are often sent home from school with strict dress codes banning their visible bra straps — and shared several gender-inclusive brands, including Tom-Boi and Play Out, that support the body-positive movement. Ramey then prompted the audience to think about underwear as a basic human need.

“[Underwear] is one of the least-donated items after catastrophes and yet clean, fresh underwear every day really is crucial to people’s dignity, sense of self-worth and our health and recovery,” Ramey said.