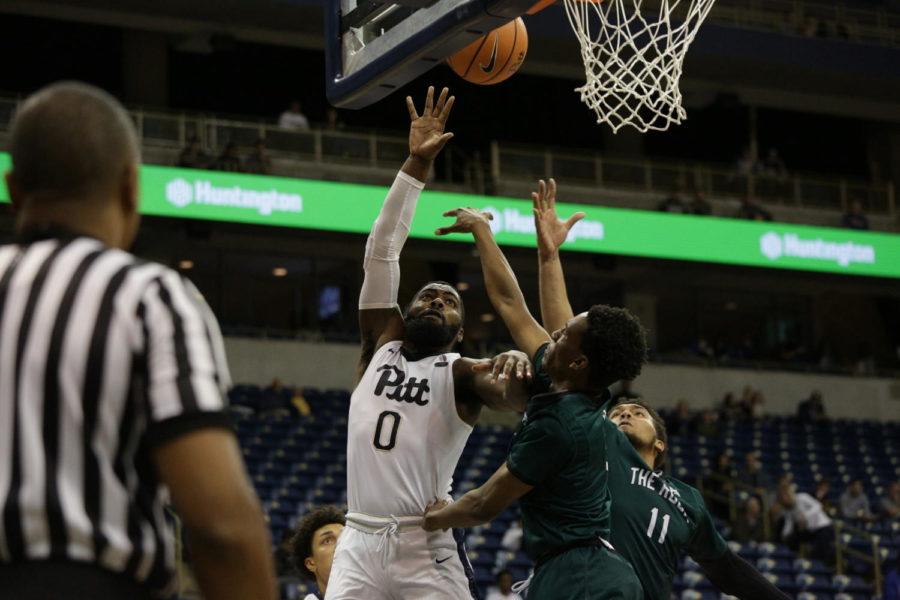 Head coach Kevin Stallings attributed the slow start to nerves from younger players, but was positive following the win.

“There were a lot of guys out there that were playing their first Division I college basketball game,” Stallings said. “We had some guys with some really good moments, [though].”

Stevenson had a good game despite playing power forward, a position that players with his 6-foot-6 height usually do not succeed at.

“I am a heavier guy for my size, so in terms of strength I can hold my ground,” Stevenson said.

Stevenson finished the day with 16 points on 66 percent shooting. The Toronto native was also Pitt’s leading rebounder for the day, notching eight boards in the contest.

Slippery Rock won the opening tip and settled into its offense quickly as senior forward Richard Bivens made an 18-foot jump shot.

Pitt made its first appearance on the scoreboard with 18:14 remaining in the first half. Carr collected a rebound and drove the length of the court, splitting the Slippery Rock defense on his way to a layup.

The Panthers play only suffered from there, with several turnovers and three fouls before the first media timeout. Pitt was down 12-9 to the Division II team with 11:42 left in the first half.

After this, the Panthers picked up their momentum, playing tough defense and getting to the free-throw line multiple times.

Pitt took its first lead of the game with 3:20 left in the first half after two free throws from Wilson-Frame. He found a rhythm late in the half, and led all scorers at the break with 15 points on 44 percent shooting.

The junior college transfer from Northwest Florida State demonstrated a nice shooting touch from behind the arc. He made three of his five attempts during his first half of play.

After a 3-pointer from Wilson-Frame, Pitt went into the half with the lead, 33-28.

The Panthers returned from the locker room seemingly reenergized as Carr scored the first bucket in the second half. He knifed through the Slippery Rock defense for a layup in less than two minutes.

The Panthers continued the second half on a 10-2 run, with sophomore forward Kene Chukwuka draining a 3-pointer after an assist from Carr.

But Slippery Rock showed some fight and didn’t let Pitt’s run last too long. Redshirt sophomore forward Micah Till and redshirt junior guard Aaron McDonald led the Rock on a comeback campaign, helping their team to narrow the deficit to 63-59.

Wilson-Frame took over down the stretch for the Panthers. Following a 3-pointer by Till to narrow the margin to four points, Wilson-Frame drove on the left side of the lane and muscled through the Slippery Rock defenders for a foul and layup.

Although Wilson-Frame missed the ensuing free throw, this kicked off an 8-0 run that clinched the game for the Panthers.

Wilson-Frame finished with 24 points on 8-14 shooting. He noted situational practice from Stallings helped Pitt when the game was close.

“A part of practice that we work on every day is situational play,” Wilson-Frame said. “We work on that type of stuff so a team like us, that’s young and new, can be poised [in those situations].”

The Panthers ended the afternoon with a 71-59 defeat over Slippery Rock.

Pitt will take on the Navy Midshipmen in Annapolis, Maryland, in the Veterans Classic next Friday, Nov. 10, at 9 p.m.