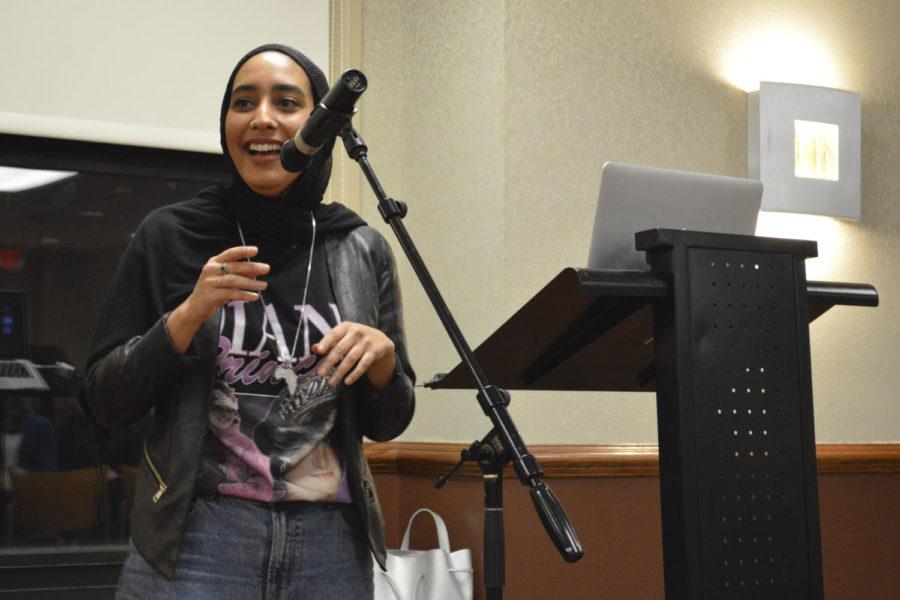 Mariah Idrissi spoke to more than 60 people in the William Pitt Union Saturday about her experience as the first hijab-wearing Muslim model in the world. (Photo by Issi Glatts | Staff Photographer)

Model Mariah Idrissi asked where she could buy a hijab in Pittsburgh while speaking at the William Pitt Union Saturday night.

“Fashion is present very prominently in all of our lives, especially growing up in the [United States],” Amal Saeed, a junior molecular biology major and president of Muslim Student Association, said. “For [Idrissi], as a hijab-wearing model, she really found a way to use her identity as influence.”

During the last stop of her U.S. tour, Idrissi spoke to more than 60 people in room 548 of the William Pitt Union about the modeling industry, the Muslim community and her personal life as the first hijab-wearing Muslim model for H&M. The 90-minute event — hosted by Pitt’s Female Empowerment Movement and MSA — began at 7 p.m. and included free pizza, a Q&A session with the model and opportunities for photos afterward.

Like many overnight sensations, 25-year old Idrissi had no prior modeling experience when a casting director for H&M’s 2015 “Close the Loop” recycling campaign scouted her off the street. Even with support from her family, a publicist friend helping her manage her new lifestyle and public speaking experience from writing and reciting poetry, Idrissi knew little about the modeling world.

“If I did not watch ‘America’s Next Top Model,’ I would have had no idea what the hell I was doing,” Idrissi said.

Now, with two years’ experience modeling for H&M and speaking at events such as Istanbul’s 2016 Modest Fashion Week — an international fashion show featuring both Muslim and non-Muslim clothing that reveals little of a woman’s body — Idrissi is globally recognized as an authority on modest fashion and a humanitarian and advocate for women’s empowerment.

Idrissi also campaigns for Human Care Syria — a project providing food, schooling and hygiene packages to women affected by the war in Syria — and spoke at London’s TEDxTeen 2016 conference with her talk “Changing the Face of Fashion.”

But Idrissi didn’t always know what to use her voice for. As a Moroccan-Pakistani who grew up in London, Idrissi said she never personally experienced racism or Islamophobia, but instead faced struggles trying to find modest bookings upon entering the fashion industry.

“I didn’t think that that industry that appears to be so diverse and embracing and inclusive of different people would be where I finally encountered awkward situations and funny looks,” Idrissi said.

Idrissi shared several of these situations — including feeling too old for the modeling industry as a 25 year-old, which she says usually considers girls ages 16 to 24 — before shifting her presentation to issues of women’s empowerment and what can be done to promote it in the fashion industry.

One issue she touched on was models feeling pressured into shooting topless because they fear they might be replaced by other models who are willing to be more sexual in their work. Idrissi spoke of a personal friend who wishes she had been exposed to the more modest side of the industry before doing a topless shoot herself.

She also criticized charities and campaigns that leave out minorities or use tokenism — a practice in which businesses hire a small number of people from underrepresented groups to appear to increase diversity — in their advertising. Rather than sexualize or misrepresent reality, Idrissi said advertisers need to embrace the fact that everyone looks different and comes from different backgrounds.

Idrissi said she considers these issues especially important for young girls, which is why she decided to tour the United States to speak with students at schools. She directly addressed the Muslim members of the audience several times during a Q&A session at the end of her presentation, from giving them advice on how to network to asking where they buy their modest clothing in Pittsburgh.

When one of the few men in the audience — Ehab Tamimi, a bioengineering Ph.D. student and member of MSA — asked how Muslim men in particular can show their support for women, Idrissi answered with an emphasis on not projecting opinions about women onto Muslim women.

“I come from a more conservative background and I don’t have any immediate interest in fashion, but it was striking to see the connection between the fashion industry and how she connected it to life lessons and a way to move forward,” Tamimi said. “It’s not enough to just be a pretty face behind the camera, it’s also important to use your influence for something good.”

Audience member Anisa Mughal, a third-year medical student, said she felt that Idrissi’s answer to Tamimi’s question was powerful. She also enjoyed Idrissi’s five “keys” — goal-setting, work ethic, networking, organization and a trust in a God or higher power — which the model attributed to helping her get to where she is in her life and career.

“I think one of my favorite things is just seeing Muslim women be active in promoting their own identities, their own careers and their own goals,” Mughal said. “I also really liked that she’s an advocate for Muslim women not to be afraid to pursue what they want.”