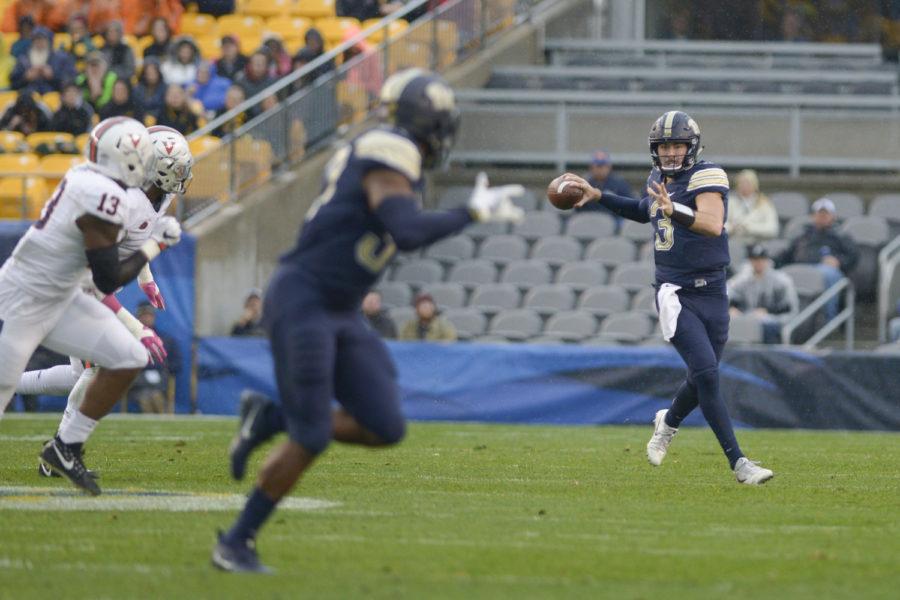 Ben DiNucci (3) has 895 passing yards and four touchdowns in the 2017 season so far. (Photo by Wenhao Wu | Assistant Visual Editor)

The narrative for the football programs of Pitt (4-5 overall, 2-3 ACC) and UNC (1-8 overall, 0-6 ACC) have been similar this season. Not only are both teams experiencing hangovers from successful 2016 campaigns, but the teams’ disappointing seasons can be attributed to one major similarity — the loss of quarterbacks.

The Buffalo Bills snagged Pitt’s Nathan Peterman in the fifth round of the 2017 NFL draft, while the Chicago Bears drafted Tar Heel quarterback Mitchell Trubisky second overall. The two players were both assets to their teams last season — leading their squads to winning records and postseason bowl games.

The Tar Heels drove down the field and Panther fans could only watch as UNC receiver Bug Howard reeled in a touchdown. The pass was from Trubisky, and as time expired, UNC had the final advantage, winning 37-36.

With Peterman and Trubisky gone this season, both teams are without a strong signal caller. Pitt has had three different quarterbacks with playing time with Max Browne, Ben DiNucci and Kenny Pickett all at the helm. Likewise, UNC has seen four different quarterbacks in Brandon Harris, Chazz Surratt, Nathan Elliott and Manny Miles.

While these situations are similar, UNC has faced more quarterback turmoil. The Tar Heels brought in graduate transfer Harris from LSU at the start of the season, but quickly shifted their game plan to redshirt freshman Surratt. Surratt carried the weight, with Harris getting only a few snaps a game, if any at all.

But following an injury to Surratt two weeks ago against Miami, sophomore quarterback Elliott found his chance to take the field.

A weakened UNC offense line would give Pitt the edge it needs. The team’s defense hasn’t been doing well, giving up more than 30 points in four games this season. If UNC doesn’t have the gall to drive down the field and make plays, Pitt has the capability to stop them.

Expect the Tar Heels to give multiple quarterbacks opportunities against Pitt, as UNC will likely give playing time to both Surratt and Elliott. Elliott turned in a strong performance against Miami two weeks ago — when he threw 173 passing yards — and this performance likely opened a door for him to start competing for playing time, starting with Pitt.

DiNucci also should be highly anticipating this matchup against UNC. While the story of late for the Panthers has been their adequate ground game, DiNucci may look to change this against the Tar Heels — moving from a comfortable rhythm of running on the ground to passing in the air.

The Tar Heel defense is allowing 7.7 yards per attempt to opposing quarterbacks and has allowed 21 passing touchdowns through 9 games. If there were any time for DiNucci to step out of his box, now would be the time.

Prediction: Pitt fans should expect their winning streak to continue against UNC. Pitt is on an upward trajectory, and they are playing their best football of the year. They now find themselves pitted against the worst team in the conference. As long as the Panthers stick with the recent dedication to the running game and continue their defensive improvements, they will step on the Tar Heels.

UNC seems like a team hungry for an upset, sitting at a shameful 0-6 in ACC play. They followed an undefeated Miami team closely in their last game — falling short by only five points — and if this is any indication of how the season is trending for UNC, Pitt should be on the lookout for an upset.