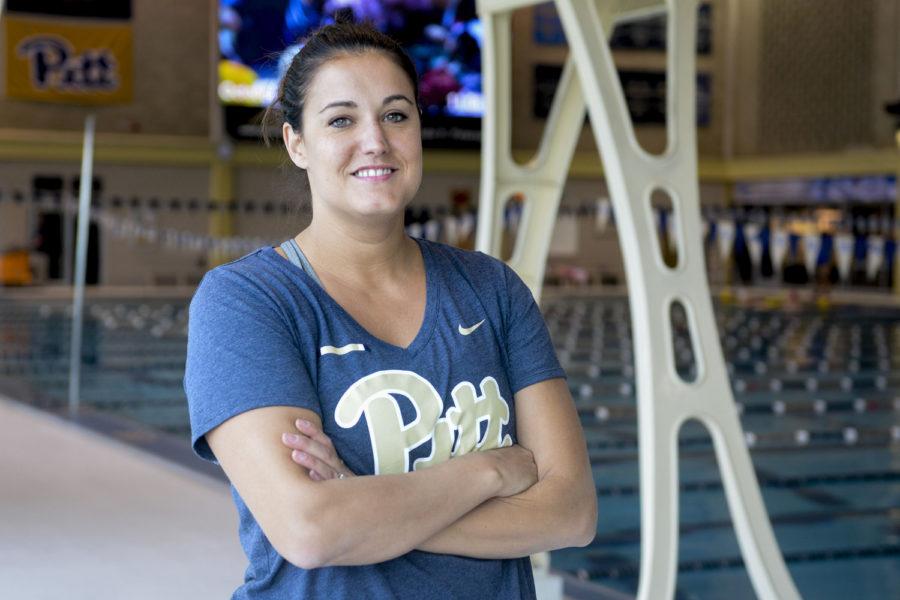 Katie Hazelton was hired as the new head coach of Pitt Diving in June. (Photo by Jordan Mondell | Contributing Editor)

When an athlete suffers a severe, life-altering injury, it usually means the end of a career — time to hang up the jersey, pack up the gym bag and abruptly find a new way to pass the hours.

Unless that athlete is Katie Hazelton.

Hazelton, the new head coach of Pitt diving — brought on by Athletic Director Heather Lyke in June — didn’t let a career-ending perforated eardrum keep her out of the pool. Instead, she used it to her advantage to become a coach and leader.

“I got injured at the age of 18 and had to stop diving,” Hazelton said. “But I knew early on that my future was in the sport.”

For Hazelton, aquatic excellence was part of her upbringing. She was born and raised in Harpenden, England — about 20 miles north of London — where both her parents worked as diving instructors and judges.

“I started diving at 5 years old because my parents were my coaches,” Hazelton said. “I was just always at the pool, they were coaching, so naturally I started diving.”

Hazelton excelled in the sport, competing at the national level for the United Kingdom throughout her youth until she encountered further medical complications from her ear affliction.

Hazelton realized she would no longer be able to dive, but she was unable to leave such an integral piece of her life behind. So, after graduating with a degree in sports science and physiology from the University of Leeds in 2005, Hazelton worked as a diving talent development officer for the Amateur Swimming Association.

While recruiting and travelling to elite training facilities across the country, Hazelton got a firsthand look at the varying coaching methods from Britain’s best.

“Although I wasn’t coaching, it gave me a really big insight into what styles of coaching I like, what I don’t like, and learn from some of the best coaches in the world,” Hazelton said.

Hazelton then applied her expertise as the diving operations manager for the 2012 London Olympics. In this role, she helped organize the diving events to make sure they followed international regulations.

After the Olympics ended, Hazelton decided to undertake a new challenge: coaching in America, with the goal to one day coach within the American collegiate system — where school, sports and personal endeavors converge. The NCAA and its blend of academics and athletics, which doesn’t exist in England since athletics are run through their own separate clubs, intrigued Hazelton.

“I always knew that sports were big here, but I really didn’t have any idea until I got here,” Hazelton said. “I still, today, am amazed by the support that the athletes have. The fan bases, and all the support for sports science, along with academics … it’s incredible, and it’s really unique to America.”

But Hazelton didn’t become an NCAA head coach right away. Her first job in the United States was as the head diving coach for the Duke Diving Club, an amateur program in Durham, North Carolina. In her four years leading the club, Hazelton’s divers won more than 10 national titles, and USA Diving recognized the club as its most improved in 2014.

During this time, Hazelton also had to make a difficult life decision.

When Hazelton was in her early twenties, nearly 10 years earlier, she tested positive for a genetic mutation that put her at a 70 percent chance of developing breast cancer by the age of 80. She faced the issue directly, and at the age of 33 made the difficult decision to undergo a double mastectomy

The disease had afflicted her grandmother, mother and aunt, and Hazelton was determined to be proactive and eliminate her risk of inheriting the disease. Now that she was in America and beginning to think about her future — her career, her family — Hazelton decided it was a choice that would benefit her long-term.

Hazelton finally achieved her goal of coaching at the collegiate level when Lyke hired her. Hazelton was enticed by the ambitious atmosphere around Pitt’s up-and-coming program. It is led by second-year swimming coach John Hargis, a 1996 Olympic Gold Medalist, and Lyke, who has a strong focus on creating Olympic-level athletes.

“It’s really exciting to be part of this bigger community,” Hazelton said, “because it’s going to make me a better coach, and ultimately make my athletes better athletes.”

Through the first four meets, Hazelton has already made a tangible impact. The women’s team (8-2 overall, 1-2 ACC) has benefited from consistent top three performances by senior Meme Sharp, while sophomore Joe Ference has done the same for the men’s team (5-2 overall, 0-2 ACC).

“When Katie came along, she brought a new dynamic to the team, and I think it’s going to benefit me and everyone else,” Ference said.

In her new role as coach, Hazelton’s main focus is improvement. She expects each one of her athletes to do better than last year, and has set high — yet attainable — standards for each diver to reach by season’s end. Because she is a detail-oriented individual, it was important to Hazelton to outline these goals and work with her divers to achieve them.

“With every individual diver, we’ve looked at what they’re capable of,” Hazelton said. “For example, with Joey, we want him to final on two boards at ACC’s. With Meme, we’re looking to medal. If we just stick to the plan, we’re going to see some pretty big performances out of everyone.”

Hazelton is tasked with ushering in a new era after her predecessor, Julian Krug, who coached the diving team for 38 seasons. Already, her divers have noticed a difference in the way she coaches and trains with them.

“Julian definitely had a more general type of coaching,” Sharp said. “He coached the general dive, whereas Katie is really focused on details, and that’s something I think, as a team, we needed.”

Hazelton also aims to build positive relationships with her athletes — not just ones on the pool desk, either. One of the ways she does this is by meeting with each diver individually at least once a week.

During these meetings, Hazelton and the athlete typically engage in an open discussion about their diving, schoolwork, and whatever other personal topics may come up.

“I care about them, and I care about their future, and if I can work that relationship, then we’ll see the performances in their sport anyway,” Hazelton said.

Hazelton’s athlete-centered approach, international connections and experience as a talented scout bode well for the team’s recruiting outlook. Her ambitious nature and lifelong expertise should help Pitt divers reach their full potential for years to come, even if starting off with a blank slate.

“There seems to be a huge culture shift in Pitt athletics,” Hazelton said. “I feel like this is the start of something really exciting, and that we can be one of, if not the best teams in the ACC.”