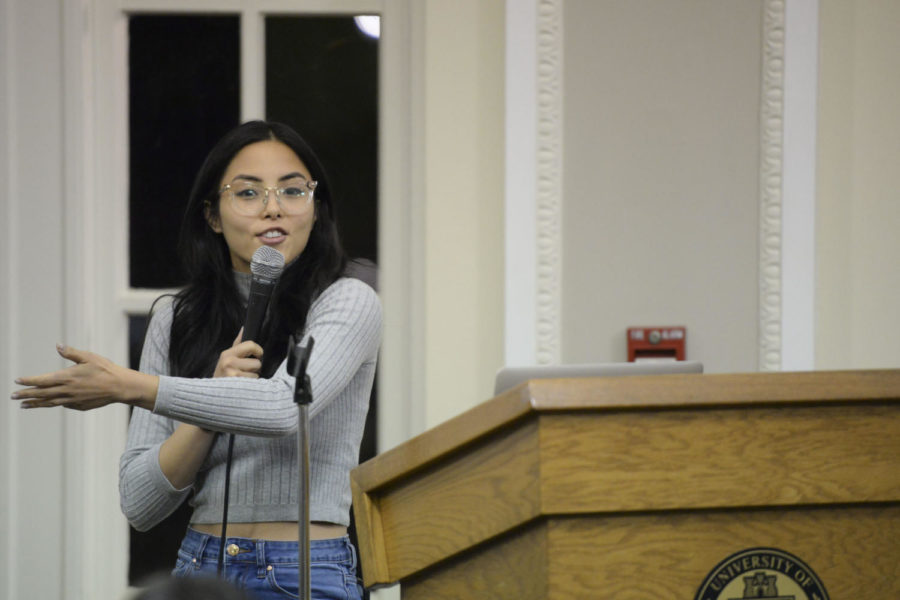 By Hannah Schneider, For The Pitt News

After her sister committed suicide in 2007, Anna Akana felt she had no purpose in life — until she was drawn into the world of stand-up comedy.

“It’s the only thing that made me feel alive,” Akana said.

But she wasn’t even aware comedy was a viable career path for her until she saw Asian-American comedian Margaret Cho performing on Comedy Central. Seeing someone who looked like her on television made Akana realize she could become an entertainer, too.

“And that is the power of representation in media,” Akana said. “Being able to identify with someone on screen who looks like you … affects everything that you believe that you can do from when you’re a child onward.”

More than 200 students gathered in the William Pitt Union Friday night to listen to Akana speak about Asian-American representation in entertainment. Akana, who was invited by the Asian Student Alliance, is a rising Asian-American filmmaker, producer, actress and comedian. She is most well known for her weekly YouTube show, which has more than 1.9 million subscribers.

Besides Cho, Akana also cited Lucy Liu, Jackie Chan and Bruce Lee as the handful of childhood role models available to her. She attributed both “yellowface” — a white person playing an Asian character — and the casting of white people in roles originally meant for people of Asian descent as causes of the lack of Asian representation in media.

“The list of movies and TV [shows] in which [producers] insert a white actor into our roles is just endless,” she said.

The topic of whitewashing — casting a white actor to play a non-white role — is gaining more attention and scrutiny in Hollywood. Recent castings accused of whitewashing include Tilda Swinton as the Asian “Ancient One” in Marvel’s movie “Doctor Strange,” Emma Stone as the Chinese character Allison Ng in the 2015 film “Aloha” and Noah Ringer as protagonist Aang in the 2010 film adaption of “The Last Airbender.”

Akana said something similar had happened to her when she was originally cast, but later cut, for a lead role in a recent major movie.

“[The producers] said, ‘No, I’m sorry. Casting a person of color as a lead role is just too big of a risk for us right now,’” Akana said.

Akana said accurate representation can grow if more Asian-American artists create and tell their own stories in film and more support is given to actors of Asian descent playing complex, non-stereotyped characters.

“No matter where you are or what you do, you have stories to tell and there are infinite mediums to tell them on,” Akana said.

Courtney Yu, a junior political science and economics major and ASA President, said she has been a fan of Akana’s for several years, thinking it was “so cool” to see someone like her in the entertainment industry.

Akana encouraged the audience to start a dialogue with her and ask questions. One student asked Akana — who suffers from depression — what advice she would give to people with mental health issues. Akana said to find what works for yourself and to be kind to yourself.

Sophomore biology major Jenny Xiao has also been a “huge fan” of Akana since high school and finds her advocacy work regarding mental health issues within the Asian-American community to be inspiring and groundbreaking.

“Most Asian Americans are very quiet about their views and their opinions, but she’s very outspoken,” said Xiao. “She talks about stuff that is almost kind of forbidden in Asian cultures, like suicide and mental issues that are not really talked about.”

Akana said if she didn’t speak up and give advice on self-confidence and advocacy, she is afraid no one else will.

“In my opinion, it’s always been like, I have a voice, and I want you to hear it,” Akana said. “Even if I feel like I’m super annoying right now, or I’m speaking out of turn, if I don’t do it, nobody else is going to.”

One student asked Akana how she has found the courage to create and upload content with the possibility of it attracting little attention or being received negatively. She said people need to view failure as a learning experience.

“You never learn to get better unless you do it. Like if I wanted to be a basketball player, if I never go to the court, I’m never going to be better,” she said. “No one who’s successful has [never] failed.”