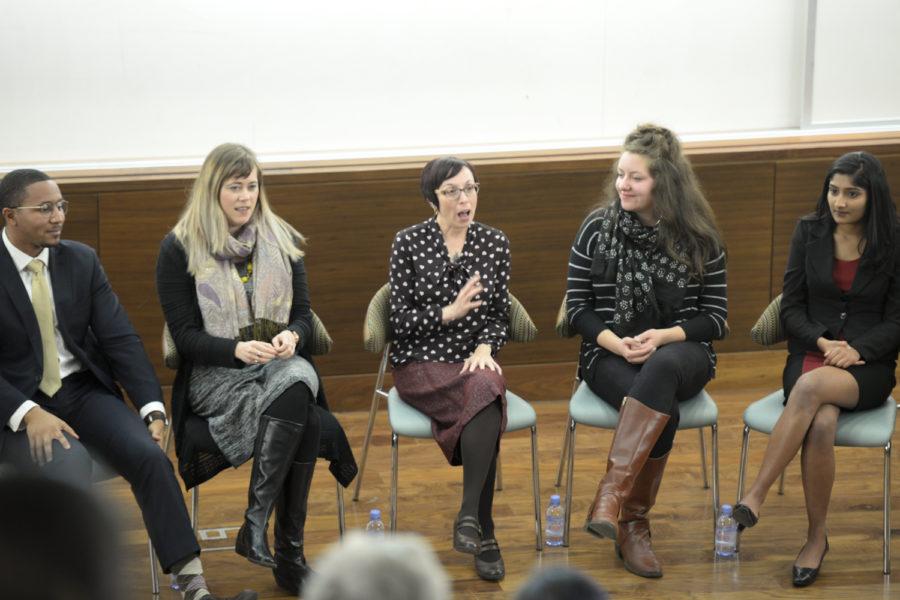 When Pittsburgh City councilwoman Natalia Rudiak received an email from the Department of Public Works — an organization dedicated to maintaining Pittsburgh’s infrastructure — about putting pad dispensers in the vicinity of public pools, she had to explain to them why their idea wouldn’t work.

“I responded, ‘Do I need to break this down to you? When you are a woman, and going to a swimming pool, the last thing you want is a pad!’” she said.

In an effort to make menstrual products free in the city of Pittsburgh, Rudiak had been in communication with Public Works in early 2017. Around that time, she had also partnered with SisterFriend, Inc. — a nonprofit organization dedicated to sustaining menstrual health by providing homeless and underprivileged women and girls with menstrual products — to push for greater access to menstrual products in the City.

Together with SisterFriend and several other organizations, Rudiak took part in the “Homeless Experiences of Menstruation Film and Panel Discussion” held Tuesday evening at Pitt’s Graduate School of Public Health.

The event began with a screening of a short film titled “Homelessness and Menstruation,” which focused on Allison Victory, a local woman who spent time homeless and experienced domestic violence.

Sara Baumann, a behavioral and community health sciences graduate student, directed the documentary, which is the first installment of her new film series, “Cycle Series.” The series depicts the many different menstrual experiences of women — Baumann mentioned the next installment would highlight the experience of transgender women.

Baumann said she wanted to share the film with the public to help advocate for better resources and more research regarding menstrual hygiene and menstrual health.  She said filmmaking is a powerful tool because it allows us to hear the experiences of individuals who are experiencing homelessness firsthand.

“Most of my work over the past years as a Ph.D. student has focused on menstrual health in developing country contexts such as Nepal and Bangladesh,” Baumann said. “I didn’t realize that right here in Pittsburgh, we face some of the same challenges regarding menstrual policies.”

According to the U.S. Department of Housing and Urban Planning’s 2015 Annual Homeless Assessment Report to Congress, about 224,344 out of the 564,708 homeless adults in the U.S. are women — about 40 percent. Of those women, 174,324 are in shelters, while 50,020 are out on the street, possibly lacking sufficient menstrual hygiene.

The film also featured SisterFriend’s founder, Tamara Whiting. Whiting said in the film that she founded the organization because there was a need for menstrual hygiene products within homeless shelters and among young girls in the public school system.

“Feminine products are one of the main things that aren’t donated to these areas,” Whiting said. “They aren’t donated because they’re not talked about.”

Allison Victory, a supporter and former user of SisterFriend’s services from Standing Stone Township, Pittsburgh, said she faced domestic violence issues and was unemployed for a period of time. Victory met Whiting years ago at a homeless shelter drive in East End and has been a supporter of SisterFriend ever since.

In the film, Victory said it is especially hard for homeless women to gain access to necessary resources.

“A lot of the products and supplies in shelters are geared towards men,” Victory said. “But poverty and homelessness with women is becoming more prevalent, so some girls resort to stealing.”

Following the short film, there was a panel discussion featuring Rudiak; Adrienne Walnoha, CEO of Community Human Services; Aerion Abney, a program officer for the POISE Foundation; LaJuana Fuller, director of the Women’s Imaging Magee-Womens Hospital of UPMC; Heidi Allison, a community support specialist for Community Human Services and the Northside Homeless Alliance; and Samidha Sane, founder of the Building Bridges Action Project and a North Allegheny Senior High School student. The panel was moderated by Patience Wilkerson, a registered nurse and the board secretary of SisterFriend.

During the discussion, Walnoha emphasized the importance of starting a conversation with homeless women about their experiences. As CEO of Community Human Services — an organization that provides food pantries, housing assistance programs and youth programs — Walnoha spoke about one woman she knew who got sick from having to resort to alternatives to menstrual products.

“She was stripping down layer after layer, each soaked with blood until we got to the last layer. She had an entire wad of newspaper shoved in her pants, where the ink had seeped into her skin and it was poisoning her,” Walnoha said. “Would any person in this room inflict that on their worst enemy?”

Sane said she finds it beneficial to look at the methods used by cities that have successfully dealt with improper access to menstrual hygiene products. Sane started the Building Bridges Action Project, a program that tackles a variety of contributors to inequitable education like inadequate sanitation and deficient resources.

“New York just passed legislation that would enable women and girls in schools, prisons and shelters to get free pads and tampons,” Sane said. “I think that is amazing and something Pittsburgh should look toward. By contacting these representatives who worked on that bill and figuring out what they did there, we can implement it in our own City.”

Audience member Lindsey Gorman, a junior psychology major at the University of Pittsburgh and creator of the Pitt chapter of “Period,” a national organization which provides products to those in need, said the event reminded her of the importance of the work she does.

“It was amazing to hear from an individual in the community who has benefited from resources like this,” Gorman said. “Sometimes it’s hard to see the impact because you drop off donations and you’re done.”

Gorman said the event also reminded her of the uphill battle many people still face in trying to make menstrual products more accessible for all.

“Tonight helps to prove how big of an issue this is,” Gorman said. “Some of the smartest and most engaged people in the City of Pittsburgh are facing so many difficulties with these issues.”