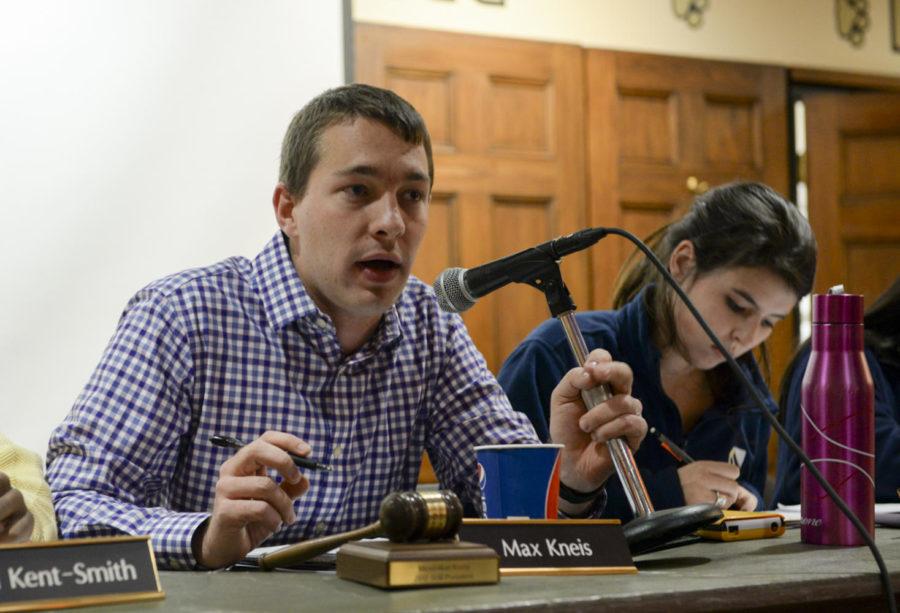 SGB discussed ramping up their Diversity Committee and making the board more inclusive at their meeting on Tuesday. (Photo by Sarah Cutshall | Staff Photographer)

Student Government Board Executive Vice President Zuri Kent-Smith announced Tuesday that the SGB Diversity Committee will be making the transition from an ad hoc committee to a prospective standing committee — a permanent committee within SGB.

“[The committee is] looking at new ways to make SGB more diverse,” Zent-Smith said. “We want to make sure SGB is setting the standard for an inclusive Pitt community.”

Kent-Smith said stating each member’s preferred gender pronoun before from the very first public meeting would be an example of this and would help those in the community who are non-binary or transgender.

“They have the identity of themselves affirmed and they feel more comfortable coming to SGB, maybe wanna run, maybe wanna get more involved,” Kent-Smith said.

The idea to bring back the ad-hoc committee from last year as a standing committee came from a discussion the board had in mid-October about making SGB more inclusive and diverse. The goal is to have students’ voices heard.

“If we want the overall Pitt community to be diverse and inclusive, it starts first with student leaders on campus,” Kent-Smith said.

Vice President and Chief of Finance Maddie Guido is also attempting to connect SGB with students by creating biweekly one- to two-minute videos highlighting what a different board member is working on. The working title is “SGB Updates” and will be aired for the entirety of the following week on the student affairs screens such as in the William Pitt Union and Litchfield Towers Lobby. The series will be filmed every other Thursday with the aid of UPTV and the first will be next week.

“This [first] one is kind of a test because not many people are going to be watching it — it’s just gonna be on during the Thanksgiving screens but kind of to see what we like, what we don’t like,” Guido said.

President Max Kneis announced that he participated in a focus group to discuss building usage Tuesday afternoon, along with board member Ian Callahan and Facilities, Technology and Transportation Chairman James Oosten. Campus Master plan organizers were also present — including three people from the Ayers Saint Gross architectural group and one person from Pitt Facilities Management.

“Like of all the buildings we have, what buildings do students get a lot of use out of, what buildings can they get better use out of,” Kneis said. “The Campus Master Plan is going to dramatically change how campus looks over the next 10 years and making sure student interests are represented is really one of our biggest goals.”

Board member Ciara Barry announced an initiative with the Residential Student Association, the Student Athletic Advisory Committee, the Blue & Gold Society, and PittServes reaching the larger Oakland community. The ‘Pitt Food Drive Challenge’ — a competition between Pitt residence halls for who can donate more food — will run from Nov. 27 to Dec. 7. For those who don’t live in a residence hall, they can donate at the Cathedral of Learning.

“There will be two game day drives, that’s gonna be not counted towards the residence halls but still anyone is able to bring donations,” Barry said. “Pitt Athletics is going to be advertising the game drive to people that are coming to the game so that hopefully we can collect more.”

The winner will be announced at the Dec. 9 men’s basketball game against West Virginia University. The prizes are an ice cream social during the first week of the spring semester for everyone in the hall — when that will happened will be determined by the winner — and bonus basketball lottery points — which help students get tickets for every resident. All of the food will be donated to Pitt Pantry, Community Health Systems and the Islamic Center of Pittsburgh.

“Especially during the holiday times it’s really important to just support the people on our campus and our community that are in need and this is a really great way to do it,” Barry said.

There will not be a public meeting Nov. 21 because of its proximity to Thanksgiving Break.

ambi- requested $17.68 for purchase, rental and service. The board approved in full.

Pittsburgh Fencing Association requested $1,576.57 for their fall equipment order. The board approved in full.

The Pittiful News requested $904 for purchase, rental and service. The board approved in full.

Information Security Club requested $23.88 for purchase, rental and service. The board approved in full.

Panther CrossFit requested $800 for general travel. The board approved in full.

Women’s Ultimate Frisbee Club requested $1,544.60 for registration, general travel and lodging for their Queen City Tournament. The board approved in full.

Pitt Men’s Club Basketball requested $1,042.50 for purchase, rental and service. The board approved in full.

Dynamic Support Association for Chinese Students requested $300 for purchase, rental and service. The board approved $136.88 and denied $163.12.

Pitt Club Field Hockey requested $1,820.30 for general travel and lodging for their National Championship Tournament. The board approved $1,544.98 and denied $275.32.

First Class Bhangra requested $455 for a competition expense. The board approved in full.

Pitt Tonight requested honorarium for their Collegiates & Comedians shows. The board approved in full.