Which weed is which: Experts compare pot strains 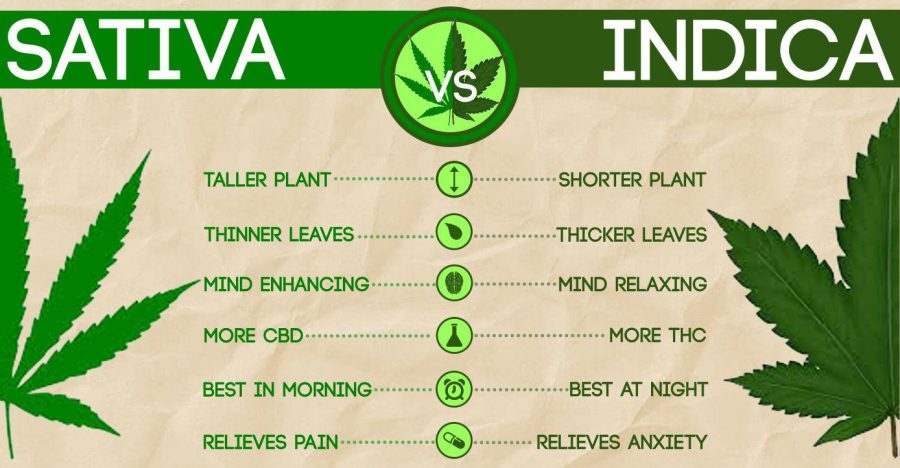 When Ken Estes, a grower based in California, crossbred Purple Urkle and Big Bud in 2003, he made Grand Daddy Purp —  now one of the most popular strains of marijuana in the United States.

But Grand Daddy Purp, known for its cerebral euphoria and physical relaxation, is just one of thousands of strains. According to Leafly.com, a site that reviews marijuana strains, users rated Grand Daddy Purp an average of 4.2 out of 5 stars. As growers across the country focus on amplifying certain characteristics of the plant — or simply on marketing their product successfully — they create varieties of cannabis with names like Sour Diesel, OG Kush and Girl Scout Cookies.

All of these strains fall into one of the two main categories of cannabis: cannabis sativa and cannabis indica, according to a distinction initially made by London’s Natural History Museum in 1922. Because of the difference in chemical composition of each strain, their effects are not always consistent.

Antoine Douaihy, a professor of psychiatry at Pitt, said while sativa and indica are two distinct subspecies of cannabis, the different chemicals within the plant produce varying effects for users.

“There’s been a lot of ridiculous claims,” Douaihy said. “Honestly, I do not believe there’s any kind of evidence to support these effects.”

Varying ratios of the two major cannabinoids — tetrahydrocannabinol and cannabidiol, or THC and CBD, respectively — are the chemicals that cause marijuana to affect the brain and cause the different “highs,” Douaihy said.

“The effects really depend on whether there is more THC or more CBD,” Douaihy said. “When you have higher THC levels [in hair samples], you see more depression, more anxiety.”

But, regardless of the amount of THC and CBD, there’s little no correlation between the plant’s ratio of the two chemicals and its strain, according to Patrick Nightingale, a Pittsburgh criminal defense attorney and the executive director of Pittsburgh’s National Organization for the Reform of Marijuana Laws. Growers can breed both sativas and indicas to have high levels of THC or CBD.

“A plant grown to have high THC content can be a sativa or an indica,” Nightingale said, adding that the issue is complicated due to “a wide variety of hybrids where growers try to get the best out of both strains.”

On the outside, though, sativa and indica plants look different from each other. Sativas have thinner leaves and grow taller, biologist Loran Anderson wrote for the Harvard Biological Museum in 1984.

Comparatively, indica leaves are bigger than sativa leaves, and the plant is shorter. According to Anderson, indicas are “short, compact plants that [are] densely branched.”

“They both have very significant potential medical benefits,” Nightingale said.

According to a 2014 survey published in the Journal of Alternative and Complementary Medicine, medical cannabis users prefer indica to relieve pain and to help with sleep. Specific conditions that sufferers alleviate with indica include headaches, glaucoma, neuropathy, seizures and joint pain.

“Sativas alleviate pain, depression and PTSD without causing lethargy,” Nightingale said. “Sativas have been found to elevate mood and to be effective in pain management.”

“We have a saying at our dispensary, indicas are ‘in-the-couch,’” said Jessica, an office manager at Compassionate Pain Management, a dispensary in Louisville, Colo., who asked that her last name not be published. “They give a body feeling. Indicas are more likely to induce relaxation and make you ‘veg out.’”

Nightingale said cannabis users should choose indicas “if [they] want something that will cause [their] mind to relax.”

“Indicas encourage sleep and relieve anxiety,” Nightingale said, adding that many cannabis users prefer to use indicas in the evening.

In Colorado, where adults over 21 years of age can legally use recreational marijuana, some dispensaries, like the dispensary in Louisville, have defined the strains they sell based on customers’ preferences.

According to Jessica, sativa’s energy-inducing properties can be overwhelming.

But, she said, other customers use the energy from sativas to get creative.

“Sativas are very cerebral. They’re going to get your mind going,” Jessica said. “Artists and writers tend to prefer sativas.”