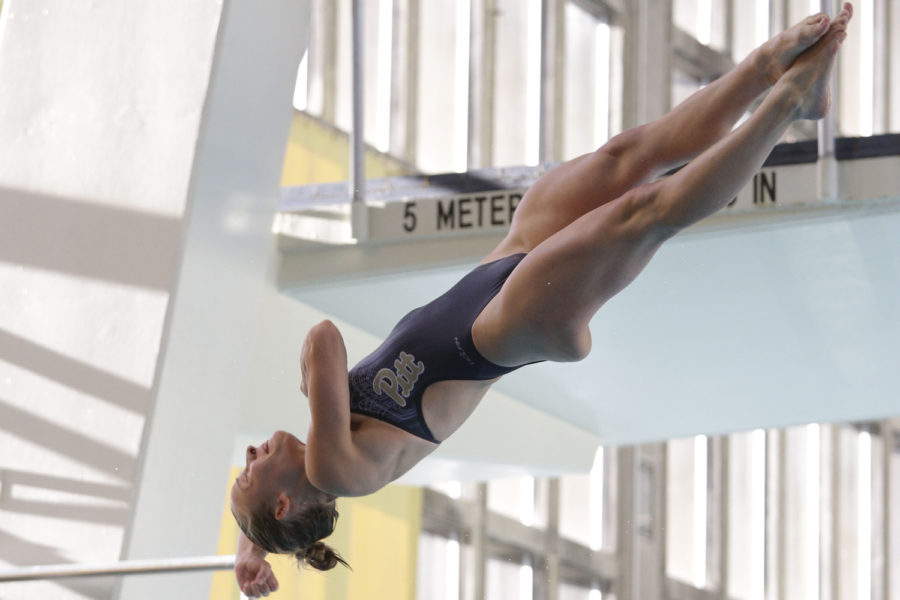 Three Pitt divers placed in the top 20 for their events at the Ohio State Invitational this weekend. (Photo by Thomas Yang | Senior Staff Photographer)

As the fall sports teams near the end of their regular seasons and the winter teams get underway, five teams took the field, court, pool and mat this weekend.

Women’s basketball triumphed over Towson in double digits, and volleyball swept two ACC teams in straight sets, but the wrestling team was pinned and the football team lost its bowl eligibility.

The Panthers swim team traveled to Columbus, Ohio, this weekend and took sixth overall in the Ohio State Invitational. The team had an impressive weekend, setting six school records and qualifying 10 swimmers for the invite’s finals.

At the competitive meet — which is held every year — Pitt took on programs like top-ranked NC State, Ohio State and Notre Dame.

On the men’s side, sophomore Samy Helmbacher shattered two school records and placed third overall at the invitational.

He first trumped the school time for the 200-yard IM on Friday, placing third in the event with a time of 1:45.76 — besting a Pitt record previously set by senior swimmer Gabe Larson at the 2017 ACC Championships in March in his third-place finish. Helmbacher broke another record on Saturday in the 400-yard IM with a time of 3:45.80, taking third again.

First-year Bence Szucsik set a record as well with his time of 1:44.17 in the 200-yard backstroke during prelims Sunday.

For the women, senior Lina Rathsack also set a new bar, placing fourth in the 200-yard IM with a time of 1:57.66, tying her own school record.

At the finals on Sunday, Richey followed up her relay performance with a stellar individual showing in the 1650-yard freestyle. She placed third in the event, but her time of 16:01.45 set another record.

The Panthers will see the pool again Nov. 29, when they travel back to Columbus to attend the USA Winter Nationals.

The diving team also competed and took sixth overall at the Ohio State Invitational this weekend, with standout performances from multiple divers.

Aside from Sharp, two other Pitt divers placed in the top 20 of their events. Freshman Noah Marble finished 19th on the men’s 1-meter springboard, while sophomore Krista Jones also earned a 19th-place finish on the women’s 3-meter.

In the finals, Sharp placed second overall in the women’s 1-meter dive.

The Panthers will compete next Dec. 1, when they travel to North Carolina to attend the USA Diving Winter Nationals.

The Pitt men’s wrestling team also had a busy weekend, as they traveled out west for three matches to begin dual-meet competition. The 25th-ranked Panthers had an unimpressive showing, falling to 1-2 to start the season.

The team started strong Friday in California, with a win over CSU Bakersfield. Down 18-17 heading into the heavyweight finale, redshirt senior Ryan Solomon defeated his opponent by a 10-0 major decision to give the Panthers a 21-18 victory. Solomon is ranked No. 8 in the country in the 285-pound class.

Later that evening, Pitt faced off against No.18 Wisconsin. The Panthers did not fare as well as they did in their opening match, falling to the Badgers 26-6. Solomon and 141-pound redshirt senior Nick Zanetta recorded the only two victories for Pitt.

The Panthers traveled to Arizona State Sunday to face the No.12 Sun Devils in their third match of the weekend. For the second consecutive meet, the team fell by a large margin — 32-6. Only Zanetta and redshirt sophomore Kellan Stout managed to pick up wins for Pitt.

The Panthers’ next competition will come Dec. 1, when they travel to Las Vegas for the Cliff Keen Invite.

The team continued its hot streak Sunday with another 3-0 win, this time over Georgia Tech (13-16 overall, 8-10 ACC). The Panthers outscored the Yellow Jackets 25-22, 25-20 and 25-21 to complete the sweep. Williams and Markovic compiled double-digit kills once again, while redshirt junior Angela Seman paced the defense with 15 digs.

Currently tied with Louisville for first place in the ACC, the Panthers are in a good position to maintain that spot with final matches coming at Virginia Tech (9-20 overall, 3-15 ACC) and Virginia (7-22 overall, 3-15 ACC) beginning Friday, Nov. 24.

The Pitt football team couldn’t convert on four straight plays at the goal line with a minute to go in the fourth quarter — losing 20-14 to the Virginia Tech Hokies and any chance at a bowl game.

“We’re on the 1-yard line, we’ve got four tries, we’ve got to score,” first-year quarterback Kenny Pickett said. “That’s on us, and everyone will take ownership of it and move on.”

The Panthers (4-7 overall, 2-5 ACC) and the Hokies (8-3 overall, 4-3 ACC) squared off in a defensive, low-scoring game, but the Panthers couldn’t piece together enough offense to win at Lane Stadium in Blacksburg, Virginia.

The Pitt Women’s basketball team got back on track after a loss to Duquesne in the City Game last week, trouncing the Towson Tigers by double digits, 81-63.

The Panthers (3-1) took on the Tigers (0-3) at home to earn their best win of the season so far. Unlike previous games — where the team struggled to get an early handle — Pitt got out to a 20-5 lead at the end of the first quarter and was not threatened by Towson for the rest of the game.

“We just came out with a lot of energy,” sophomore guard Jasmine Whitney said. “And once you get energy and hit your first couple shots, it’s hard to stop after that.”