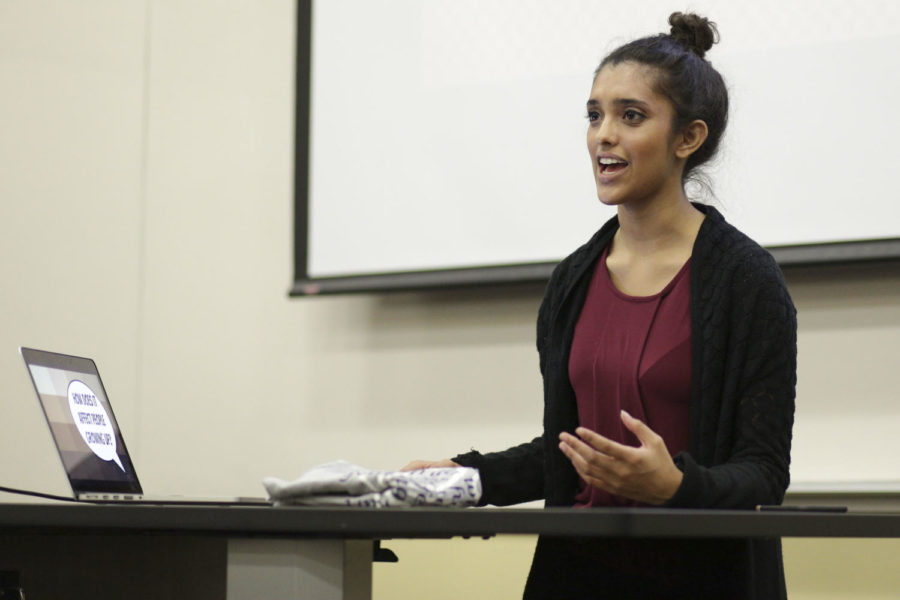 By Hannah Schneider, For The Pitt News

Until about two weeks ago, Anvit Rai wasn’t familiar with the concept of colorism.

“I had heard of [colorism], but I didn’t know how pervasive or important it was,” Rai said. “To a degree, I always thought that colorism was racism. I didn’t know it was a completely separate entity.”

More than 50 students joined Rai in David Lawrence Hall Friday evening to participate in a discussion titled “Let’s Talk About It: Colorism.” The South Asian Student Alliance hosted the event in collaboration with the Black Action Society.

The event educated students on the differences between colorism and racism, the importance of identifying colorism and how to eradicate the issue. In their initial presentation, SASA defined colorism as, “the prejudice or discrimination against those who have darker skin.” Racism, on the other hand, is the general mistreatment of people of different races, according to SASA.

Rai, a senior studying neuroscience and the president of SASA, said the group wants to hold these discussions to highlight societal issues the organization feels are not being examined closely enough.

“The whole idea with why SASA has these [events] is we want to highlight issues in our society that we as an organization feel are not getting their due diligence,” Rai said.

Rai said in choosing a partner organization for the event, the Black Action Society stood out to him.

“We felt that’d be an incredible collaboration for us to have,” Rai said. “Incredible activists, standing for what we felt were very honorable causes.”

For a majority of the event, students shared their own personal experiences and discussed how certain issues affect minority groups differently. A number of students said as children, their parents discouraged them from going outside, for fear of them becoming darker.

Rai shared an experience from kindergarten. He said he was teased since there weren’t many Indian children in his class, and when he told his parents, the amount of time Rai was allowed outside was limited.

Another common experience many students shared was the practice of skin bleaching. During the discussion, Karee-Anne Rogers, a junior English writing and Africana studies student, recalled an experience with skin bleaching that a close family friend encouraged.

“She was like, ‘You’d be pretty, if you bleached your skin,’” Rogers said. “She literally had jars of bleaching cream in her drawers, and she tried to give me some.”

Rogers said other stories of skin bleaching she heard during the discussion were “striking.” During a small group discussion, another student talked about her mother making her use a bleaching cream she was allergic to as a young child.

“Her mom made her keep it on for the full 25 minutes anyway,” Rogers said. “Allergies can get worse over time and it seeps into your skin, so I was upset that she was made to do that … That really stuck with me.”

“People are using these products but you don’t realize how it affects them emotionally,” Nwobu said. “That was probably the most striking part of the conversation for me.”

Many students said it’s important to note parents aren’t using these practices against their children with malicious intent. Many said their parents believed having lighter skin would provide them with a better life.

“They do it, I guess, out of love. We could say it’s love, but it’s misguided,” one student said. “There’s something wrong there.”

Rai said he believes skin bleaching is a gendered issue, saying the pressures for women to attain societal beauty standards are far greater than those for men.

“Especially in South Asian societies, a man who isn’t very good looking could very easily get married … But the woman needs to be very pretty, fair, to be marriageable,” Rai said. “I definitely do think there is a gender bias in this issue.”

While it’s good to discuss colorism and the systemic effects it has on people of color, Nwobu said, not enough is being done to discuss the cause of the problem. Rai agreed, saying more awareness is needed on the issue.

“I think it’s important for people of every color to go to these events,” Rai said. “It’s important that people from all branches of the aisle come together.”