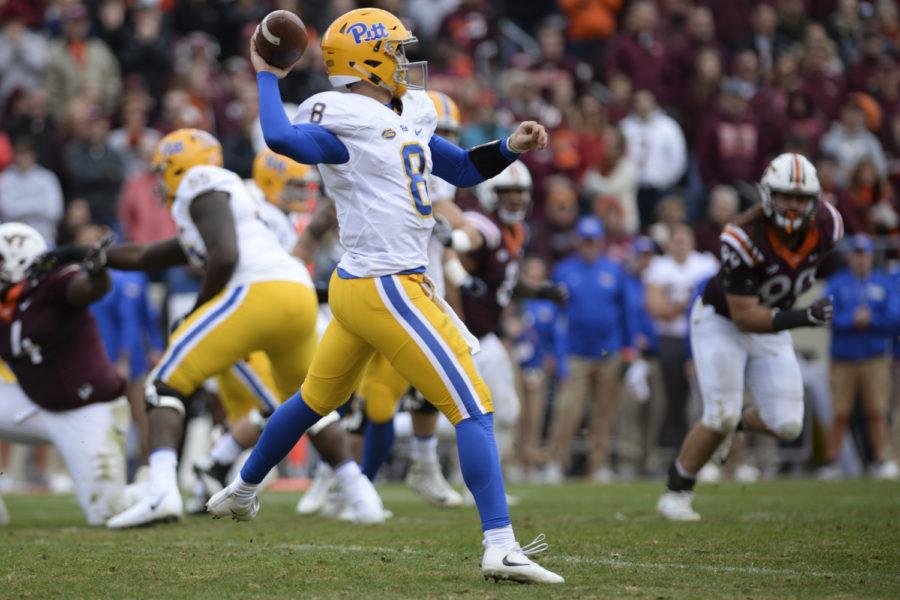 Playing the spoiler role for a second straight season, the Panthers pulled off their biggest upset win of the year conquering the previously undefeated No. 2 Miami Hurricanes 24-14 at Heinz Field.

Marking its second straight year with a late-season victory against a top-three team, Pitt football (5-7 overall, 3-5 ACC) shut down the Hurricanes’ (10-1 overall, 7-1 ACC) offense in the team’s final game Friday.

The Panther defense kept the Hurricane offense off-balance the entire game, and in his first start this season, first-year quarterback Kenny Pickett played well against a top defense — throwing for a touchdown and rushing for two more.

“Defensively, we did a heck of a job the entire game,” Narduzzi said. “It was really a team defensive win.”

Each team struggled to move the ball in the first quarter, but the Panthers managed to grab an early 3-0 lead. The Pitt defense came out and held off the Hurricanes — allowing 29 yards of total offense in the quarter.

With an opportunity to capitalize on the offensive end, the Panthers failed to piece together any long drives early in the game.

Later in the quarter, Pitt received the ball in strong field position at the Miami 45-yard line. To start the possession, Pickett found a hole and ran for 11 yards, and after two short gains, the Panthers had to settle for a field goal. First-year Alex Kessman drilled a 46-yard field goal to give the Panthers a 3-0 lead.

Maintaining the lead into the second quarter, the Panther offense fumbled the ball and gave possession back to the Hurricanes. After traded punts, the Hurricanes found some offensive rhythm through a series of short passes.

To cap off their drive, junior quarterback Malik Rosier threw a 23-yard touchdown pass to sophomore wide receiver Ahmmon Richards to take a 7-3 lead with 7:03 left in the second quarter.

Piecing together an offensive drive, the Panthers moved into the redzone on their next possession.

Finishing off an 11-play, 68-yard drive, Pickett hurtled into the end zone for a 6-yard touchdown rush to put the Panthers up 10-7 going into halftime.

The Panthers managed to outgain the Hurricanes 176 to 108 total yards with Pickett leading the Panthers with 116 yards through the air and 36 yards on the ground.

Heading into the locker room at half, Narduzzi boldly predicted a Panther win in a sideline interview with ESPN.

“I felt pretty good,” Narduzzi said after the game. “I wouldn’t have said that if I didn’t feel pretty good, I guess I believed.”

In a sluggish second half start, each team punted the ball away in their first three possessions. A 29-yard strike from Pickett to redshirt senior Jester Weah got the Panther offense moving midway through the third quarter.

Pickett finished off the drive with a 5-yard shovel pass to redshirt junior running back Qadree Ollison, to put the Panthers up 17-7 with fewer than two minutes left in the third quarter.

Both teams continued to trade punts as they each struggled making any headway downfield. With fewer than 10 minutes left in the fourth quarter, Miami redshirt sophomore Evan Shirreffs replaced Rosier at quarterback to try and spark a comeback.

“We didn’t really know what happened, we thought the starter was hurt,” redshirt junior defensive lineman Dewayne Hendrix said. “We just kind of kept rolling from there.”

But Shirreffs couldn’t get a drive moving, and the Hurricanes punted it back to the Panthers with nine minutes left in the fourth quarter.

Using a combination of completions from Pickett and runs from Ollison, the Panthers worked their way into the redzone.

Going for it on fourth-and-5, Pickett took a bootleg around to the left and outran the defense to score a 22-yard touchdown — extending the Panthers lead to 24-7 with 2:54 left in the game.

“I was just going to get the first down and get down,” Pickett said. “But I turned the corner, and when I looked, and no one was there so it was just a foot race between me and the safety to the pylon.”

Rosier re-entered the game for the Hurricanes as quarterback and quickly moved the Hurricanes downfield. Rosier found senior wide receiver Braxton Berrios downfield for a 39-yard touchdown to complete a 38-second drive, 24-14.

Successfully recovering an onside kick, Rosier and the Hurricanes looked to make one last push downfield. On third-and-3, Panthers senior defensive back Avonte Maddox stripped the ball from Rosier and Hendrix recovered, sealing the upset victory.

The Panthers took three kneel downs to close out their 24-14 victory.

“It’s a big-time win in Pittsburgh, maybe one of the biggest wins you had in the city of Pittsburgh for Pitt football,” Narduzzi said. “It gives belief in our kids that we can do it anytime.”

While this final game of the year marked the biggest win of the Panthers’ season, the team is still likely ineligible for a bowl game with fewer than six wins.