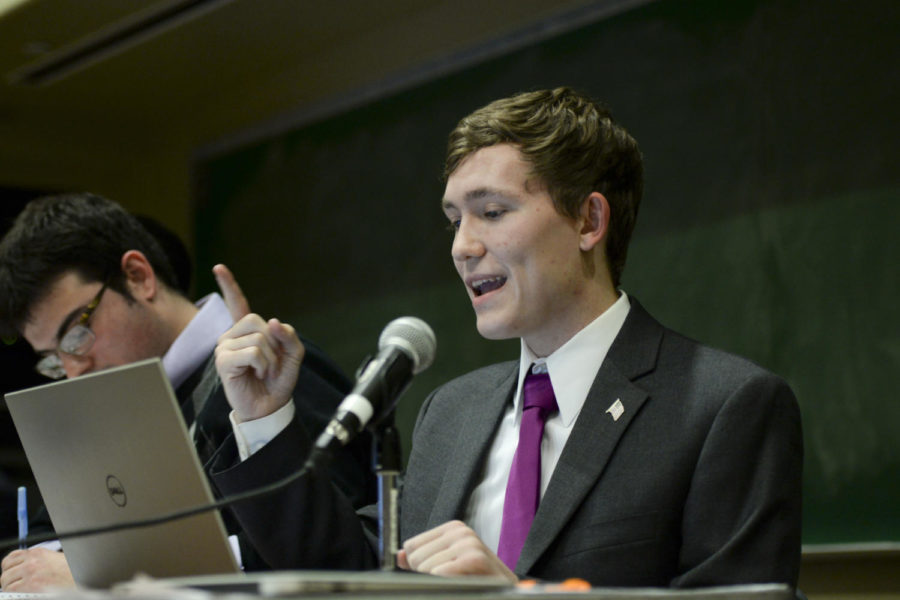 Ben Sheppard, president of Pitt’s Libertarian group Students for Liberty, went after both major political parties in his opening remarks during the first-ever three-way debate with the College Democrats and the College Republicans Tuesday night.

The debate was held in room 324 the Cathedral of Learning, where three prominent political groups on campus debated current issues including health care, student loans, private prisons and terrorism. Jonathan Merker, president of the Pitt Political Science Student Association, and a junior politics, philosophy and economics major, served as the moderator for the six debaters — two from each group.

Though the debate had three diverse viewpoints, a newer political group, the Pitt Progressives, was absent. According to Merker, the group was not invited since they have been “off [PSSA’s] radar.” PSSA — the debate’s organizing group — was not looking to actively recruit new groups for their programming this year, he said.

“That was a miscommunication, I would say,” he said. “I already reached out to their president and we will definitely have them in further events, rest assured.”

Jeff Migliozzi, a junior marketing major and president of Pitt Progressives, said he was disappointed the group wasn’t approached, feeling the debate was missing an important viewpoint.

“I think [the debaters’] arguments, from what I saw, lacked a lot of passion. I think [Pitt Progressives] would have brought a way more convincing argument for actual leftist policy,” he said.

The debate began on the topic of healthcare, with the Libertarians and Republicans agreeing people should have a right to try experimental drugs and import medicine from other countries. But Sheppard said the Republicans in Congress had failed to put forward solid legislation to achieve these goals.

“Their Trumpcare policy is irresponsible and destructive. It’s even worse than Obamacare, Sheppard said. “It doesn’t offer the solutions that we need and increases more spending.”

“In order to keep our inalienable rights to life, liberty and the pursuit of happiness, we need to make sure that we protect everybody’s health, Lehman said. “Not only will universal health care provide medicine to all, we’ll also do it cheaply and efficiently.”

Republican debater Peter Brath, a junior majoring in political science and economics, disagreed with the Democrats’ claim that the income gap would be reduced with the introduction of universal health care, saying it would cost college students about $4,000 a year for health care if they decided to get their own plan.

“The average 20-year-old spends about $700 a year on health care. This is essentially a regressive tax,” Brath said.

Later in the event they debated the topic of terrorism, specifically discussing how much blame the United States has for the spread of anti-Western ideas and terrorist groups.

Republican debater Anthony Marinelli, a sophomore history and Russian major, said it is the “fault of the U.S.” for the opposition to Western ideals because of what the United States stands for.

“Westerns ideals rooted in the enlightened, rule of law, freedom of religion and expression human rights — these are not the beliefs that those in the Middle East and Muslims believe in large numbers,” Marinelli said.

In response, College Democrats Business Manager Alex Rose, a sophomore political science and history major, said he took issue with the Republicans stating that it was a battle between Western civilization and radical Islam.

“This isn’t just a fight between just Western civilization and radical Islam, we have allies in the Muslim world,” Rose said. “The biggest victims of terrorism in the world are Muslims. So we have to remember our allies that are dying in the Middle East.”

Sheppard said the debate had a “good amount of tension” and thought the debaters and audience learned a lot.

“I think the [other groups] articulated their personal positions, I thought they got their points across well even if I disagree with them,” he said.

Sheppard said he would be interested in doing another debate like this one again, but he would like to go up against a group other than the Republicans or the Democrats.

“I would love to debate the Pitt Progressives. I want to see a good debate, since there’s an overlap in some areas and a clear divergence in some other issues,” he said, comparing the libertarian and progressive viewpoints.

Audience member Benjamin Koo came to the event on assignment for his argumentation class as part of a requirement to listen in on a public debate.

Koo, a sophomore mechanical engineering major, said he enjoyed hearing the differing political viewpoints on the topic of student loans, which affects him personally, because he doesn’t often see this topic covered in the national news.

“I generally know what each party stands for, but I like to see how the differences between their platforms plays out onto these different topics, especially the student loans part, because it’s relevant to my situation,” Koo said.

PSSA tries to spread this type of political awareness, Merker said, and he thought the debate accomplished that.

“We try to make all political voices heard and make political awareness on Pitt’s campus, which is a key focus of PSSA,” Merker said. “I believe we were able to do that tonight.”