A productive, yet misrepresentative three-way debate 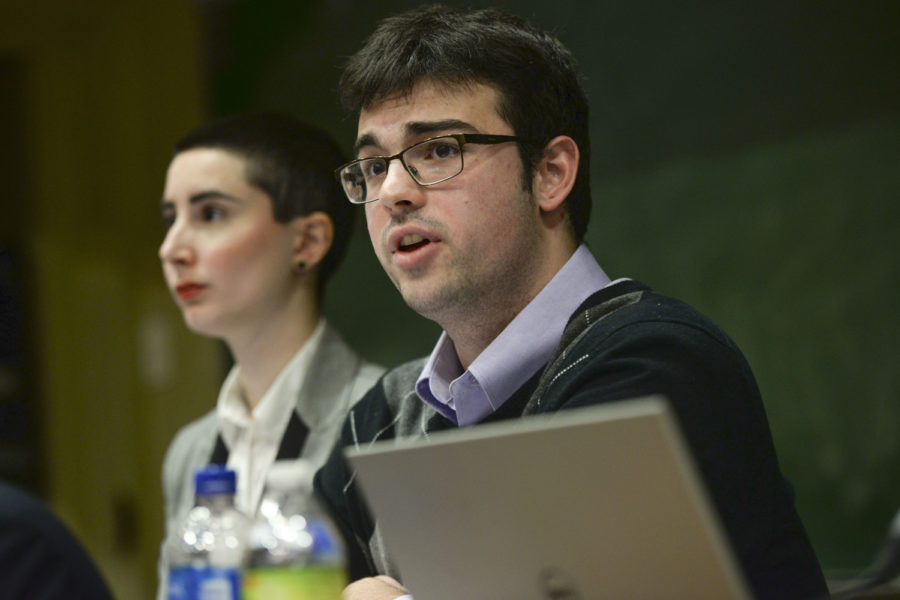 By Neena Hagen, For The Pitt News

At colleges across the country — from California to the University of Connecticut — political events frequently turn violent.

So when I got to room 324 of the Cathedral of Learning Tuesday evening for the Pitt Political Science Student Association’s three-way debate between Democrats, Republicans and Libertarians, I braced myself for a barrage of jeers and taunts from both sides.

But much to my surprise, Tuesday’s event was a civil discussion on local and national politics focused on issues such as health care, student loans, criminal justice and terrorism.

Two members each from Pitt College Republicans, Pitt College Democrats and Pitt Students for Liberty participated in the debate — but what was clearly missing was a strong liberal voice to balance out the constant hammering of right-wing talking points.

Jeff Migliozzi, a junior marketing major and president of Pitt Progressives, echoed this dissatisfaction in a Facebook post Nov. 9, the day Pitt PSSA announced the debate.

“It’s disappointing that left wing views will be excluded from this debate,” he wrote. “Extreme right wing and libertarian vs democratic centrists hardly seems like a well rounded balance of ideas.”

The Libertarians and Republicans agreed almost entirely on the issues of health care and student loans, the two main economic issues in the debate — leaving the Democrats often completely double-teamed.

And the Pitt College Democrats were inconsistent in pushing for left-wing policies. They sometimes supported key issues, such as free higher education, but other times, they completely failed to do so. For example, when it came to health care, a single-payer system was integral to 2016 presidential candidate Bernie Sanders’ campaign and the leftmost ideology of that election. Single-payer health care, however, was noticeably absent from the Pitt College Democrats’ agenda.

The Democrats also lacked passion and conviction in their arguments, struggling to make themselves stand out on a stage with four staunchly right-of-center opponents. If they’d had more liberal support on stage with them they could’ve stood a chance — but the debate didn’t provide other liberal viewpoints.

The Pitt Progressives and other left-wing groups, such as the Democratic Socialists for America, could have contributed to a passionate support for left-wing politics on stage — but the debate moderator and president of Pitt PSSA told The Pitt News the organization was not actively seeking new groups for its programming this year. Thus, many of the progressive organizations on campus were overlooked.

Admittedly, the debate wasn’t entirely fair because of a lack of adequate representation on the left. But the right-wing slant was certainly a welcome change of pace for Pitt’s political climate — or any university in this country, which mostly lean liberal in their politics.

Ben Sheppard, a libertarian debater for Students for Liberty, said afterward the debate had a “good amount of tension” and he believed the event was educational for both the audience and debaters.

But the student body’s response to these right-wing talking points was even more notable than the points’ presence themselves. The audience remained civil throughout the entire event, politely applauding points they had earlier scoffed or rolled their eyes at. This is a massive improvement upon many conservative events hosted at universities across the nation, in which students have rioted in protest of inflammatory right-wing speakers and caused millions of dollars in damages and prompted massive security fees.

Just last year, violent protestors at California State University, Los Angeles, blocked the entrances to an event held by right-wing pundit Ben Shapiro. And at Berkeley earlier this year, rioters shut down an event put on by controversial conservative speaker Milo Yiannopoulos — the security costs to the city alone were more than $800,000 for the 15-minute long speech.

While this was merely a school debate and not an inflammatory outside speaker, the crowd seemed far more accepting of conservative students at Pitt than right-wing pundits anywhere else in the country.

The stark contrast between the response to the debate at Pitt and the response to conservative views elsewhere cannot be overstated. When it comes to accepting students’ free speech, Pitt is clearly moving in the right direction — so perhaps the apparent lopsided nature of the debate wasn’t as much a failure as it was a learning opportunity.

But still — for the sake of fairness — we must ensure our political debates accurately reflect the opinions of the general student body, so we can adequately represent them in our intellectual discourse.

Ultimately, the Pitt College Democrats failed to represent true liberalism — an ever-growing political ideology for many on Pitt’s campus. They proposed inconsistent viewpoints, allowing the conservative opponents to flourish in the debate — and from the start, even those on stage knew that was going to be the case.

Ben Sheppard is a columnist at The Pitt News.