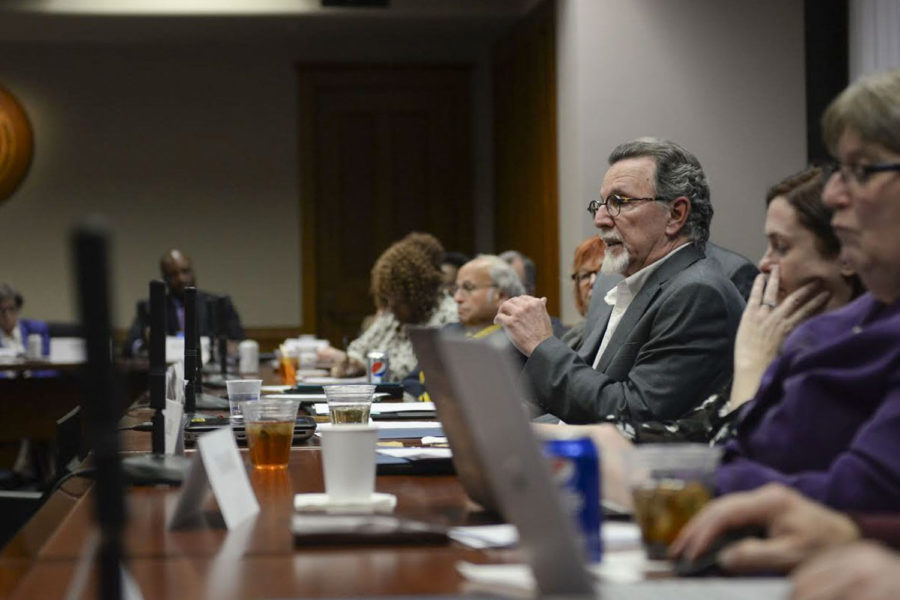 Student activist Sarah Grguras says people often ask her what the money Pitt invests in the fossil fuel industry could go toward.

Her response? “Literally anything.”

“They could invest in the Pittsburgh public schools, or they could invest in us,” the junior environmental science and ecology major at Pitt said. “It could really cause a ripple effect if a huge university like Pitt decides to divest [from fossil fuels].”

After several protests against Pitt’s controversial investments in the fossil fuel industry, the University will consider the opinions of Pitt students like Grguras and faculty members through a socially responsible investing ad hoc committee.

“[The socially responsible investing ad hoc committee] started with a committee formed to look at fossil fuel divestment and that was at the initiative of student groups and faculty members,” Wilson said.

One of the student groups that helped uncover the University’s controversial investments was the Fossil Free Pitt Coalition, a group formed in 2014 made up of 49 clubs such as Pitt Men’s Rugby and the Muslim Student Alliance. For three years, the coalition pressured University board members through protests and letter drops. The group met with the University Senate Council faculty committee last year, and the faculty committee ultimately voted for the creation of the committee to support and research the environmental and financial implications of divestment in fossil fuels.

Wilson has doubts about these numbers, though, saying that the $26 million likely only accounts for direct investment in fossil fuels, instead of representing all funds that contribute to fossil fuels.

“It was clear it was only the direct independent investment,” Wilson said. “But there is still more because a lot of those conglomerated kinds of funds they invest in weren’t included in there too.”

The University invests about $2 billion of its endowments in commingled funds — funds that distribute the money among a number of different companies — according to information previously published by The Pitt News. It’s possible some of these commingled funds invest in companies that produce fossil fuels.

Grguras, who acts as a core organizer for the Fossil Free Pitt Coalition, said despite the coalition’s efforts, details of many of Pitt’s investments are kept under wraps, with Chancellor Patrick Gallagher often declining right-to-know requests. This makes it nearly impossible for students or faculty to find out information regarding how the endowment funds are being used, she said.

“The University hasn’t been very transparent when it comes to their investments,” Grguras said. “We pay tuition money, so this is our University, not theirs.”

The University declined to answer questions regarding its disclosure of information about investments and about how much money Pitt’s fossil fuel investments generate.

But these investments in the fossil fuel industry, Wilson said, are part of a much bigger issue — how public universities use their endowments.

“There’s a debate on what should be the driving force behind endowment investments — if it should be just money, or more than that,” Wilson said. “We need to look at socially responsible investments while also trying to make the world a better place.”

This is one of the reasons, Wilson said, the socially responsible investing committee will be made up of a small group of people that will represent the community and bridge the gap between Pitt students, faculty and administration.

“Our goal is to open up some dialogue between faculty and students and even trustees who hold a lot of the power,” Wilson said.

Isabelle Ouyang, a junior English writing major and member of the Fossil Free Pitt Coalition, said as a student at this University, it’s not comforting to know Pitt invests in harmful industries.

“We come here because Pitt is promising to better our futures, but they are also investing into an industry that is actively contributing to the destruction of our future,” Ouyang said.

Pitt spokesperson Joe Miksch said the University will create a separate committee of financial experts, put together by Gallagher, that will make recommendations regarding fossil fuel investment once the socially responsible investing ad hoc committee collects its findings on the topic of divestment.

Although the ad hoc committee’s start date is unknown and the committee still awaits commitment from several members, Wilson said once everything is finalized the University will take suggestions from the community in regard to fossil fuel investments.

“We have to face the complexities of this,” Wilson said. “It’s a matter of our future.”

Isabelle Ouyang previously wrote for the opinions desk at The Pitt News.