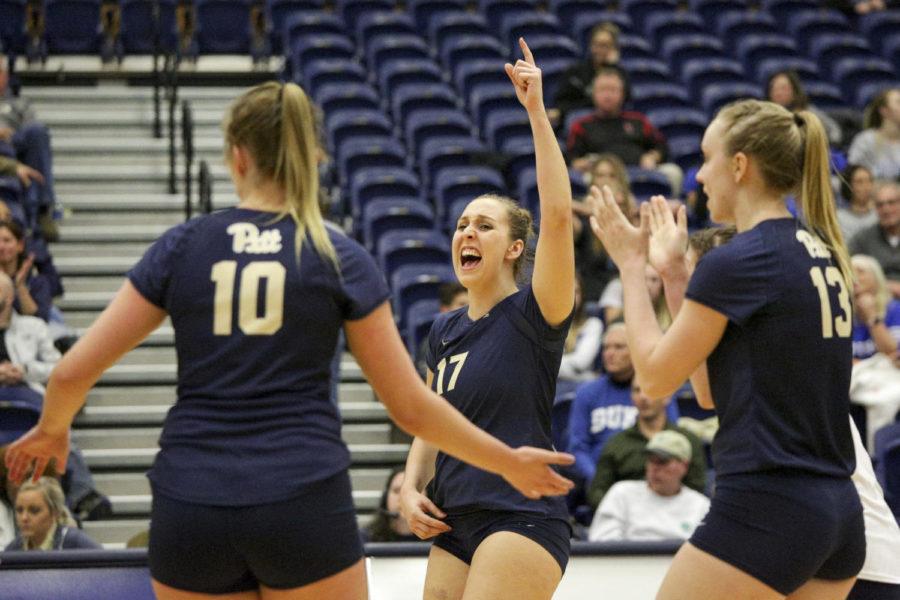 After the Pitt women’s volleyball team finished its season tied as ACC champions for the first time in program history, the Panthers (25-6 overall, 18-2 ACC) earned a trip to the NCAA Division I Women’s Volleyball Tournament for the second straight year.

The team will travel to the neutral site of Penn State for its first-round matchup against the Virginia Commonwealth Rams (30-2 overall, 14-0 Atlantic 10), who also finished as first-time champions of their conference. The game will take place Friday, Dec. 1, at 5 p.m.

Similar to the NCAA Basketball Tournament, the NCAA Volleyball Tournament includes 64 teams, 32 of which automatically qualify by winning their conference. The other 32 teams deemed most deserving are then given at-large bids by the selection committee.

Last season, the Panthers anxiously watched the selection show to see if they had earned an at-large bid in the tournament. But this time around, there was no drama — Pitt earned an automatic berth by finishing first in the conference, tied with Louisville.

Pitt’s spectacular regular season was the culmination of a three-year stretch in which the team continually climbed the ranks of the ACC, improving its conference record each year from 13-7 in 2015, to 15-5 in 2016, to 18-2 this season. That improvement resulted in head coach Dan Fisher’s 2017 ACC Coach of the Year award. Fisher has also accumulated an impressive 117-44 record in his five years at Pitt.

Pitt brought back most of its players from 2016 after losing just two seniors to graduation. Most importantly, these Panthers have postseason experience, including three players who earned 2017 all-conference honors. The ACC named sophomore Nika Markovic, junior Kamalani Akeo and redshirt sophomore Stephanie Williams to the All-ACC First Team and named first-years Kayla Lund and Chinaza Ndee to the ACC All-Freshman Team.

The Panthers enter Saturday’s match riding a dominant nine-game win streak, during which they’ve outscored the competition 27 sets to two. The team swept its last four opponents and hasn’t conceded a single set since Nov. 12.

But they’ll face an opponent who is red-hot as well — VCU currently owns the nation’s longest win streak at 27 consecutive matches.

The Rams are led by their towering middle backs, 6-foot-3 junior Tori Baldwin and 6-foot sophomore Jasmine Sneed. Baldwin ranks fifth nationally in blocks per set, while Sneed is seventh. Together, the duo commands a VCU team that leads the nation in blocks.

While VCU has a top-notch defensive front, Pitt boasts one of college volleyball’s premiere attacking forces — the Panthers rank 11th in the nation in kills per set, with 14.48.

Pitt’s attack is led by Markovic, who paces the Panthers in points (473.5) and kills (393) this season. Markovic is one of the most efficient right-side hitters in the NCAA, with her 4.74 points per set ranking her at second in the nation for her position.

Markovic is complemented by Williams, who ranks second on the team in points and kills for the season. The Panthers’ defense is anchored by redshirt junior Angela Seman (393 digs) and sophomore Layne Van Buskirk (101 blocks).

The Panthers’ first-round opponent is a 30-win team from the Atlantic 10, just as in 2016. Pitt fared well in that game, notching a 3-1 win over the 30-2 Dayton Flyers. This season, the Panthers dominated other Atlantic 10 teams, notching 3-0 victories over Dayton and St. Louis in September. If Markovic and Williams can get the ball past VCU’s Baldwin and Sneed on a consistent basis, Pitt has a good chance of moving on in the tournament.

The teams, however, find themselves in the same section of the bracket as perennial powerhouse Penn State (29-1 overall), which has won six championships since 2007. Whichever team emerges victorious will face the daunting task of playing the No. 1 Nittany Lions, assuming Penn State beats Howard in its first game.

Two of Pitt’s last three tournament appearances — in 2003 and in 2016 — ended with 3-1 losses to Penn State. The Panthers may get the opportunity to take revenge and pull off a major upset against their in-state foe, but they’ll have to take care of business against VCU first.