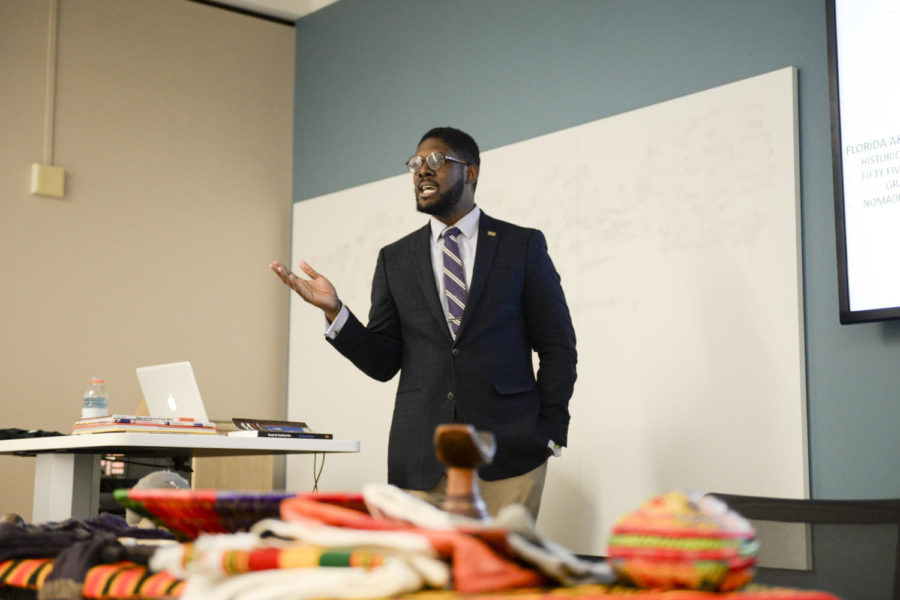 Speaking about his travels to Africa, Derric Heck described his experiences researching African cultures as “amazing.”

“It was not only informative for me, it was transformative,” Heck said.

About 20 students gathered in Posvar Hall Thursday afternoon to attend a discussion Heck led, titled “Identity, Culture & Education — Examples from Kenya and Ethiopia.” The event was part of the “Let’s Talk Africa Series,” sponsored by the African Studies Program.

Heck, a graduate student at Pitt, studies social and comparative analysis in education. His discussion detailed his travels to Ethiopia this past summer and Kenya from two years ago, which have contributed to his research on race in the classroom.

Heck, along with 15 others, traveled to Ethiopia for five weeks this past summer as part of the Fulbright-Hays Program — a program that awards grants to teachers, administrators and graduate students to train or do research abroad. They received a grant to research cultures in Africa with the intent of later writing curriculum for U.S. schools. Eleven of the 16 attendants of the program were elementary through high school teachers, and the remaining five were Pitt graduate students.

Heck narrated his trip to Ethiopia through a photo essay projected onto a screen behind him, describing himself as a “budding photographer.” He said since there was a lingual and cultural barrier, photography allowed him to immerse himself further in the culture.

“I found that the camera was the best introduction for me to these places,” Heck said.

Heck said that throughout the trip, he tended to trail behind the group, taking photographs and observing. His photographs documented his friends, colleagues and Ethiopian citizens in places such as Wolaita Sodo University and the Cheery Children Education Centre — where the group lived and volunteered. Rather than trying to merge his culture with Ethiopians’ or share his culture with Ethiopians, he tried to connect with the culture and ask questions.

“If you go to a place and you are not able to absorb it, you’re not able to really dig deeply into the atmosphere and understand the environment. You really might leave without understanding,” Heck said. “If you go with your current perspective … and you don’t have more inquiries than you have answers, you run the mistake of missing some very rich and very powerful things.”

One event Heck described during his presentation was “the jumping dance,” a dance performed by the Maasai people of Kenya. In this competitive traditional dance, men gather in a circle and take turns jumping as high as they can while keeping their arms down at their sides. Heck projected a photograph of his American friend, shown with his arms flailing, attempting to participate in the dance. While the Kenyans were more skilled, Heck said, both communities were trying to make a connection with one another.

“There’s still a desire to connect. That’s what I want you to take from this,” Heck said. “There’s a desire to be of and be within this photo. And that was really the ethos of our entire trip. To be with, to be of, and to become one.”

Anna-Maria Karnes, a graduate student in the School of Education who also participated in the Fulbright-Hays Program trip to Ethiopia, said the speech has an impact on everyone who came. It’s important to learn about different cultures, Karnes said, and to know what’s going on in different countries.

“If you can learn about each other, we learn how to get along, how to love each other, how to be in a society together,” Karnes said. “It’s so important that we know what’s really going on in a country.”

Nektarios Kasamias, a first-year urban studies major who attended the event, likewise put a lot of value on studying other cultures — something he said people don’t do often enough.

“It helps you to contextualize yourself and your thoughts if you know more about the world,” Kasamias said. “I think it is good to slowly open your mind and just think about these things more often. I think some people never think about them.”

“We can use our diasporal identities to be more empowered,” Kasamias said. “Even if you’re not going to specialize in this field, it’s really good to just be exposed and just think about something.”

Ruba Idris, a senior health services student and president of the African Students Organization, said that in order to make positive change around the world, you have to be aware of different cultures.

“Awareness is one of the most important steps in making change,” Idris said. “Once you’re aware about certain things around the world, then you’re able to put yourself into a position where you can better everything around you.”

Utilizing the Ethiopian language Amharic, Heck said there are “a million reasons” for American educators and professionals to invest in Africa because it has the potential to expand knowledge and awareness of different cultures to Americans.

“‘Gibizha’ means invitation [in Amharic],” Heck said. “I think we have to extend a gibizha to people of different backgrounds and cultures, so that we can learn more about ourselves and about them.”