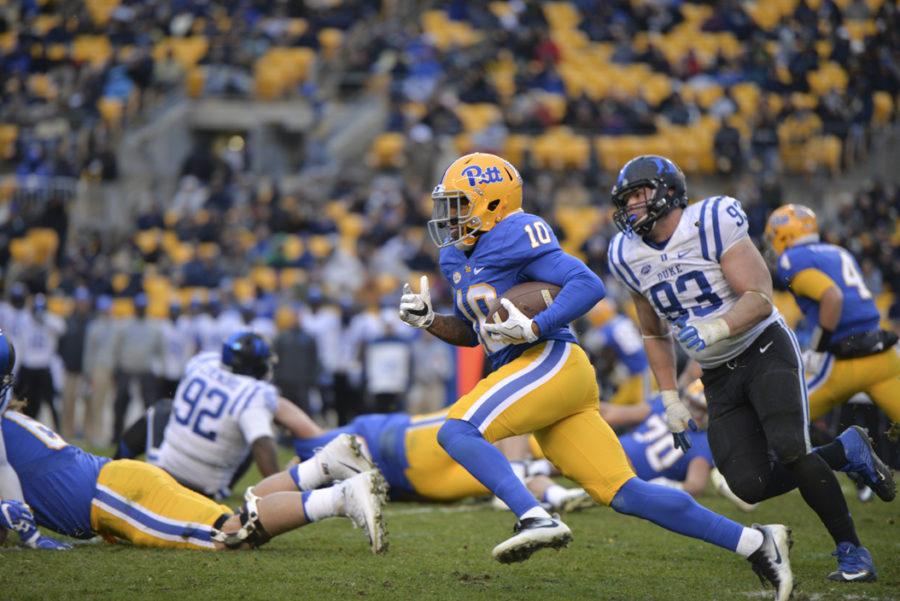 Wide receiver Quadree Henderson recorded 767 kick return yards in the 2017 season. He announced Monday he will not be returning for his final football season and will instead enter the 2018 NFL Draft. (Photo by Jordan Mondell / Contributing Editor)

Pitt junior wide receiver and return specialist Quadree Henderson announced in a statement on Twitter that he will be leaving Pitt’s football team to enter the 2018 NFL Draft.

“My lifelong goal has always been to play in the National Football League,” Henderson said Monday. “After speaking with my parents, I have reached the decision to forego my final year at the University of Pittsburgh to pursue my dream and enter the 2018 NFL Draft.”

Henderson lettered as a first year, playing in nine games and leading Pitt with 504 kickoff return yards. His most notable performance from his debut season was his 100-yard kickoff return touchdown in the team’s game against Navy.

As a sophomore, Henderson demonstrated his ability as a top return specialist. He recorded 2,083 all-purpose yards in his sophomore season and established himself as the team’s second-leading rusher. He earned Consensus First Team All-American, First Team All-ACC Kick Returner and FBS Leader in combined kick return yards and kickoff return touchdowns with 1,166 yards and three return touchdowns.

Henderson garnered even more ACC recognition in his third year with the Panthers, earning a spot on the second team as a specialist for a consecutive year. He put up 767 kick return yards to rank 15th nationally.

This is the second Panther to announce he will not be returning for the 2018 football season. The announcement of Henderson’s draft comes after news that sophomore running back Chawntez Moss is leaving the Pitt football team, also announced Monday.