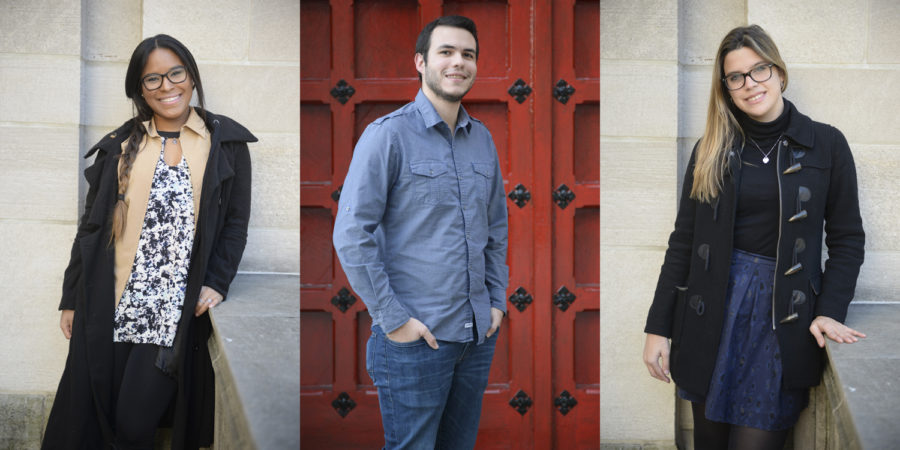 When Hurricane Maria struck the island of Puerto Rico in September, it left almost the entire island without electricity, and residents had limited access to food and water. David Canino was thankful for the bare essentials.

“Even though I didn’t have water or light, nothing happened to my house. So I really am grateful and lucky for that,” he said.

Canino said his situation after Maria was desperate because there was no drinking water and no communication signal for about two weeks. He lives with his mother and dog but was unable to find out if his family on the other side of the island was alright for two weeks — the roads were blocked.

“It looked like a war zone out there. It was just devastating to look at,” Canino said. “A lot of people lost their homes and a lot of people died as well. I’m not sure of the exact number but I know it keeps rising.”

Canino is a second-year law student but was left unable to attend his classes at the University of Puerto Rico School of Law — until he received an email from his school offering a temporary solution.

The University of Puerto Rico emailed several law students shortly after Maria asking if they would be interested in continuing their coursework in the United States. The opportunity was made available to them through a program set up with the American Bar Association’s Section of Legal Education and Admissions to the Bar. They were given the option of attending law schools in states ranging from New York to Florida. About 35 students were accepted and 11 of those students, including Canino, arrived at Pitt in mid-October.

“It really has been a great experience,” Canino said. “I love the City, the experience in the law school has been great. The professors are very amicable, the students as well. They have made us feel very welcome and warm.”

Sofía Mendoza Matos, a third-year law student from UPR, also decided to come to Pitt through the program. She also described the people in Pittsburgh as warm, although she admitted the weather was not. She said beginning class in the middle of the semester was difficult but manageable.

“At first it was hard to adjust because we came in the middle of the semester, but then as we kept up with class and picked up the pace of the class, I adjusted well since most of our classes and seminars back home have readings in English,” she said.

The students are taking up to nine credits at Pitt Law and then taking any more credits they were signed up for at the beginning of the semester at the University of Puerto Rico. The program is set to run until the end of the fall semester.

Sheila Velez Martinez, a Pitt professor of refugee, asylum and immigration law and director of clinical programs at the Pitt School of Law, was part of the group responsible for bringing UPR law students to Pitt. She teaches as a visitor at the University of Puerto Rico School of Law, so through that the connection the schools started a conversation after the hurricane.

Martinez said the the students are paying tuition fees to their home school, while apartment rental company Franklin West donated housing for the students this semester. Martinez helped make sure students could enroll in courses that would count toward their degrees back home by ensuring their course load met American Bar Association criteria.

Rocio Alers, a second-year law student, chose Pitt after she heard that Pittsburgh was a very nice and comfortable city, and because she heard good things about Pitt’s law school.

“A brilliant idea, I wasn’t doing anything, I work but I wasn’t able to work due to the emergency, it was really bad at that time,” she said. “It was a great opportunity that I took advantage of.”

Alers had stayed in a bunker apartment during Hurricane Maria and could hear the destruction happening outside, but had no idea it was “going to be that bad.”

“In the morning when we got out of that apartment, we saw everything was very destroyed. No green — Puerto Rico is very green, so there was no green, everybody was in shock,” she said.

Hurricane Maria — which was classified as a Category 4 hurricane when it hit Puerto Rico — left all 3.4 million residents without electricity if they did not have a generator. It caused extensive damage on top of the existing destruction left by Hurricane Irma, which had occurred two weeks earlier.

According to CNN, the current death toll from Hurricane Maria as given by the Puerto Rican government is 58, although that number may rise as more investigations are conducted. The damage estimate is at $95 million.

But Canino said the situation in Puerto Rico has begun to head in the right direction. He said right before he left things had started to “normalize” as gas and water became easier to buy.

“I was able to contact my family members and the roads were a bit more cleared out, so it’s getting better, but it’s progressing slowly and it’s going to take a lot of time before we’re able to rebuild,” he said.

The agreement between UPR and Pitt, Alers said, is also helping her family back in Puerto Rico.

“I think I can help them better if I am here, because now I’m looking for stuff to send them in Puerto Rico,” she said. “I look for stuff and send it there, like batteries.”

Alers expressed interest in extending the students’ time in Pittsburgh if the situation in Puerto Rico does not improve, but she was not sure how such an extension could be achieved. She said the emergency agreements, like the current one between UPR and Pitt, may prove helpful for future students who experience crisis situations like Hurricane Maria since it might pave the way for a more permanent agreement anticipating disasters yet to happen.

“We don’t know what else is going to happen in Puerto Rico … this one was improvised because we didn’t know it was going to be like this, but this can be very good,” Alers said. “I don’t want anybody to pass through what we already passed, but just to have it as an emergency option.”

Alers said it was painful to leave her family behind, but they have assured her that what she is doing is best for her and her family.

“They feel happy that I’m here because they see a way out, like we’re gonna be okay, at least we have one member of the family out there,” Alers said. “I’m like the hope sign of my family.”

Editor’s Note: An earlier version of this story claimed that professor Sheila Velez Martinez said several of the law students from UPR were enrolled in the securities in immigration clinic.  The clinic she was actually referring to was the securities arbitration clinic. The Pitt News regrets this error.