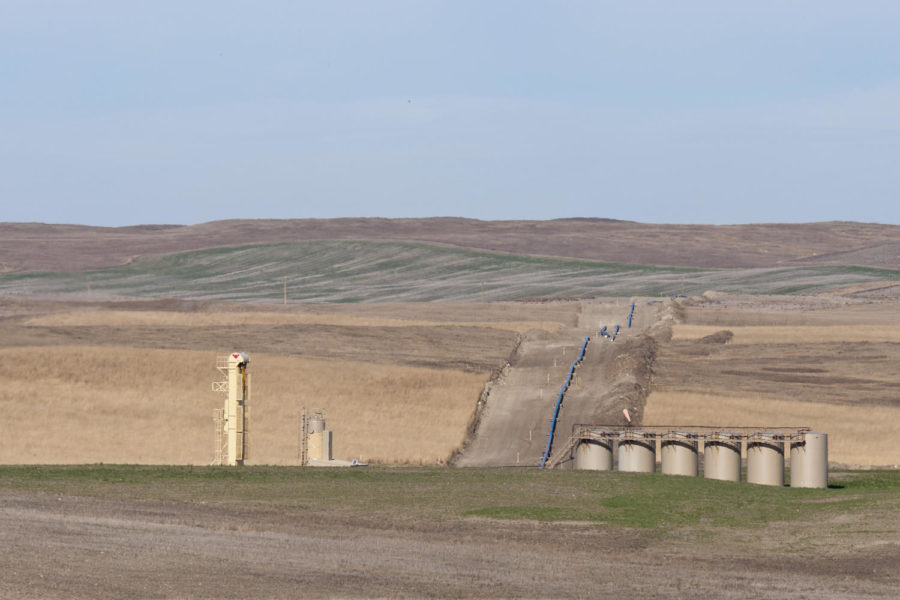 The Keystone Pipeline was shut down Nov. 16, 2017, due to a leak that spilled thousands of gallons of oil in South Dakota. (Steven Oehlenschlager/Dreamstime/TNS)

Native Americans in the Dakotas faced police dogs, pepper spray and rubber bullets last year while trying to protect their homes from one pipeline — now parts of the region have nearly 210,000 gallons of oil spilled on it from another.

Last year’s clashes on the Standing Rock Reservation in North Dakota temporarily halted construction of the Dakota Access Pipeline — a project that would have run from oil fields farther north in the state down to Illinois and then to Texas for export. But for those living in the region, DAPL isn’t the only environmental issue.

Running from Alberta, Canada, all the way down to the Gulf Coast, the Keystone Pipeline has been in operation since 2011. Last month’s spill in Marshall County, South Dakota, came as TransCanada — the company operating the pipeline — was waiting to be granted a permit from Nebraska’s state government for its planned expansion, Keystone XL.

The issue of these pipelines is more than just a political stance — this is about the survival of our planet.

It sounds dramatic, but that’s the point. Even for those whose lands aren’t immediately at risk, there’s little more dramatic than the fate of the earth being in the hands of oil companies and corrupt politicians. We are allowing ourselves to destroy our home and poison our resources for nothing more than short-term economic gain — and the problems with Keystone and Keystone XL are already showing it.

You don’t need to be a scientist to understand that oil in water is bad for the environment. From middle school science classes onward, we are taught that oil and water don’t mix — and those experiments just used olive oil. Imagine what happens when the oil is petroleum and the water is home to millions of species. If that image isn’t potent enough, imagine drinking it.

Brian Walsh, an environmental scientist with the South Dakota Department of Environment and Natural Resources, told The New York Times in an interview after the Keystone spill that the leaked oil posed no immediate risk of contaminating the drinking water of people living near the site. Yet even without their drinking water poisoned, locals will still have to be wary of negative health effects from breathing in polluted air and coming into contact with contaminated surfaces.

In comparison to other oil spills, South Dakotans got lucky — many spills occur in bodies of water and poison the water used by people living around the contaminated area. Individuals who use water polluted by crude oil for activities such as laundry and bathing experience dermatological problems ranging from mild rashes to malignant skin cancer, according to a 2010 report by the Worcester Polytechnic Institute. Those who ingest the oil, either through drinking water or consuming the meat of contaminated livestock, appear to have an increased risk of cancer and digestive issues.

Health problems and ecological issues are just two component of pipelines’ high price tags. But here’s the kicker — the benefit of the Keystone Pipeline that already exists on the U.S. economy is minimal. According to a 2015 analysis from The Washington Post, claims that the pipeline will create as many as 42,000 new jobs are significantly exaggerated.

“In the context of the U.S. economy, the impact is barely a ripple,” Washington Post reporter Glenn Kessler said.

Some oil experts, like petroleum geologist Arthur E. Berman, also don’t consider the economic side of arguments to expand the pipeline to be realistic. In an analytical piece in February, Berman suggested TransCanada was gambling on a demand for its product that might not ever materialize.

“The Keystone XL Pipeline is a bet on much higher oil prices several years from now,” Berman said. “It is also a bet that U.S. tight oil output will continue to grow and will need heavy oil to blend for refining. Both bets are risky.”

On the other side of the issue, environmentalist, author and journalist Bill McKibben documents the process of actively opposing the pipeline and trying to get politicians on board to vote it out in his 2013 book, “Oil and Honey.” Many conservatives, including Ben Shapiro, called McKibben and his supporters “radicals,” a term McKibben rejected.

“Radicals? They work at oil companies and coal companies and gas companies. They’re willing to alter the chemical composition of the atmosphere to make money,” McKibben writes. “No one has ever done anything more radical than that.”

Support for constructing a new pipeline also has to be predicated on leaving the extraordinarily high costs of oil spills out of the equation. On average, cleaning up oil spills can cost anywhere from $7 to $630 per gallon, depending on where the spill occurs, according to Resources for the Future, an environmental nonprofit. BP’s 2010 oil spill in the Gulf of Mexico cost $62 billion — a figure it’s unlikely BP factored in when calculating how much money they’d make from the venture.

In his book, McKibben points out that the Koch Brothers — who have a combined wealth of almost $100 billion, according to Forbes — make their money in hydrocarbons. He adds that the brothers spent close to $100 million during the 2012 elections on candidates who didn’t want to regulate carbon.

Outside of the Koch Brothers, a lot of money is given to candidates who support deregulating fossil fuel companies, the biggest source being the U.S. Chamber of Commerce — a business-focused lobbying group. The group spend $90 million in lobbying related to climate change in 2014, more than any other organization, according to a Harvard Business Review analysis.

Between their minimal economic gain and their negative impact on the environment and our health, the Keystone and Dakota Access Pipelines can’t be our best options for generating our society’s power — renewable energy is. Our elected officials might recognize that — if it weren’t for the level of funding they get from the energy industry.

Even after former President Barack Obama rejected the construction of the Keystone XL Pipeline in 2015 following a seven-year review, President Donald Trump undid all of the efforts to keep it at bay and approved it within the first few months of his presidency.

“It’s a great day for energy independence,” Trump said in a March 24 press conference. “[The Keystone Pipeline is] the greatest technology known to man or woman.”

“So sad that Obama rejected Keystone Pipeline,” Trump tweeted in November 2015. “Thousands of jobs, good for the environment, no downside!”

Whether it’s risks to public health, the poisoning of natural resources or fewer jobs than expected, it’s hard to pick just one downside. We need to stop voting for people who don’t have our best interests in mind to represent us. If our elected officials focused more on our well-being than their own wallets, we could create jobs in renewable energy and it would actually be good for the environment — no downside!